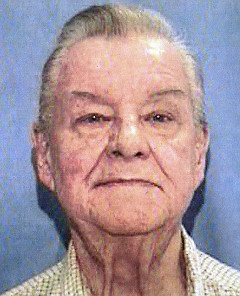 In the absence of real news and hard facts about James von Brunn, the cable news networks are making a great deal of the fact that this man was “born in 1920, making him 89 years old, so an elderly gentleman,” as one talking-head just now described him.  Longevity is no antidote for racism and antisemitism (shown here in an undated photo from his website, used without permission).

This sort of analysis does nothing to explain this man’s actions and place them in the broader context of antisemitism, white supremacy and systemic racism in the U.S.  The fact that Von Brunn, long known as a white supremacist and a convicted felon, would take this sort of action should not be surprising.   White supremacy in the U.S., rather than being an atavism, is a consistent feature of the political landscape.

While the news networks are going to prattle on about how it’s possible that an octogenarian could carry out such a shooting, what (I predict) they’ll miss is the ways that this shooting is connected to the one last week of Dr. Tiller.   As I wrote about then,  killing, abortion, antisemitism and racism are inextricably linked in the white supremacist imagination.   I’m hoping that some of the more thoughtful mainstream news people will connect these dots.

The Associated Press just added this:

Von Brunn has a racist, anti-Semitic Web site and wrote a book titled “Kill the Best Gentile.” In 1983, he was convicted of attempting to kidnap members of the Federal Reserve Board. He was arrested two years earlier outside the room where the board was meeting, carrying a revolver, knife and sawed-off shotgun. At the time, police said Von Brunn wanted to take the members hostage because of high interest rates and the nation’s economic difficulties.

The museum houses exhibits and records relating to the Holocaust more than a half century ago in which more than six million Jews were killed by the Nazis. It is located across the street from the National Mall, and within sight of the Washington Monument. The museum, which draws about 1.7 million visitors each year, was closed for the day after the shooting, and nearby streets were cordoned off by police. Surrounding roads were closed at least temporarily and blocked off with yellow tape. Police cars and officers on horses surrounded the area.

CNN is reporting a major shooting at the DC Holocaust Museum:

According to TPM’s report he holds strong anti-Semitic views. They are reporting his own version of his biography like this:

James W. von Brunn holds a Bach-Sci Journalism degree from a mid-Western university where he was president of SAE and played varsity football. During WWII he served as PT-Boat captain, Lt. USNR, receiving a Commendation and four battle stars. For twenty years he was an advertising executive and film-producer in New York City. He is a member of Mensa, the high-IQ society.

In 1981 Von Brunn attempted to place the treasonous Federal Reserve Board of Governors under legal, non-violent, citizens arrest. He was tried in a Washington, D.C. Superior Court; convicted by a Negro jury, Jew/Negro attorneys, and sentenced to prison for eleven years by a Jew judge. A Jew/Negro/White Court of Appeals denied his appeal. He served 6.5 years in federal prison. (Read about von Brunn’s “And so, on December 7, 1981, a bright, crisp morning James Wenneker von Brunn visited the Federal Reserve Building on Constitution Ave., across from the Washington Monument, Washington D.C. I had cased the building twice before, and talked at length with one of the guards, a retire U.S. Marine. I posed as a freelance newspaper reporter. I wore a trench-coat with a camera-case slung over my shoulder. . The Marine (“HARRY”)) guided me through the Board Room, and Paul Volcker’s office; there I met his secretary, a smartly dressed middle-aged lady with gray hair. My objective was to arrest Volcker and the FED Brd of Governors.

Greg Sargent adds this about the Holocaust shooter and others lately:

Remember the enormous controversy that erupted in April over a Department of Homeland Security report that assessed the threat of “right wing extremists”? The story provoked days of nonstop cable chatter, forcing DHS chief Janet Napolitano to ultimately apologize.

Today, a gunman entered the Holocaust Museum and exchanged fire with security guards, leaving one in grave condition. MSNBC reports that the suspected gunman is connected to anti-government and white supremacist groups. If that proves correct, perhaps it’ll be time to revisit all that criticism of the DHS report. Right?

This passage from the DHS report in particular sparked a huge outpouring of rage on the right:

“Rightwing extremism in the United States can be broadly divided into those groups, movements, and adherents that are primarily hate-oriented (based on hatred of particular religious, racial or ethnic groups), and those that are mainly antigovernment, rejecting federal authority in favor of state or local authority, or rejecting government authority entirely. It may include groups and individuals that are dedicated to a single issue, such as opposition to abortion or immigration.”

Will major federal officials now be targets of these racist-right groups?