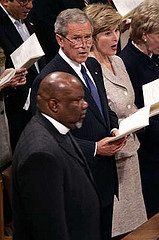 Earlier this month, Bishop T.D. Jakes, leader of one of the largest congregations in America (“Potter’s House” in Dallas Texas), responded to CNN’s claim that he and other “prosperity” preachers are ignoring the largely egalitarian messages of the Rev. Dr. Martin Luther King(photo: directionstoorthodoxy). Prior to publishing his article, Jakes stated that “personal responsibility, motivating and equipping people to live the best lives that they can” are more pressing than the pursuit of social/racial equality.
In response to the attention given to the Rev. Jeremiah Wright, Jakes defined the mission of Christian congregations and their function in larger struggles for racial justice and social equality. In an editorial Jakes wrote for CNN, he claims that a Christian congregation should not segregate itself on the basis of race or politics. Rather, “its relevance and vision must go beyond its community and reach the world for which Christ died.” This, for Jakes means that congregations (and presumably the congregants that fill them) should fill a “broader role in politics, business, media and impacting societal ills.”

In order to address societal ills, and more broadly, bring about social and racial equality in America, Jakes suggests the following: Americans dissolve their membership in monoracial churches and join multiracial congregations; and Americans unite across lines of race, class, and gender to provide resources to at risk groups.

Though sociologists such as Korie Edwards, Michael O. Emerson, and George Yancey continue to examine the role of multiracial churches in the quest for racial equality, the primacy Jakes gives to “social capital” is disturbing. Social capital refers to a community’s “trust, norms, and networks” (Robert Putnam). When used effectively, and by that I mean when communities form relationships with each other, resources can be distributed from the proverbial haves to the have-not’s. Sociologists Eduardo Bonilla-Silva and Gianpaolo Baiocchi (2007) argue that this social capital approach involves a weak understanding of racism. This understanding ignores that: Social networks and norms of social behavior are often mobilized to defend racial exclusion in a racialized society; individuals in a racialized society do not have equal access to networks, and networks themselves are racialized. And the assumption that social capital leads to certain virtuous norms of behavior is both untenable and confusing of causes and effects. For Bonilla-Silva and Baiocchi (2007), proponents of this social capital perspective fail to acknowledge that America is a nation built and sustained on white domination of Blacks, Hispanics, and the white underclass.

Scholars such as Melissa Harris-Lacewell, Shayne Lee, and Jonathan Walton claim that the leader of the Potters House, one of the largest and most diverse congregations, possesses a thin framework for understanding contemporary problems of race, class, and gender. These scholars argue that Jakes provides weak solutions to social problems. Jakes’ editorial did little to address those critiques.

Instead, in this and other works, Jakes dismissed Wright as angry and irrational while claiming to advocate for the Black community–a community that as Michael Dawson shows, shares the same views regarding racism as Wright. Sadly, like Booker T. Washington before him, Jakes’s weaving together of (a) American individualism and with that, a weak understanding of racism, with (b) an alleged concern for the Black community, not only separates Jakes from the thoughts and opinions of most mainstream Blacks regarding racism, but more importantly, any realistic hope of changing the racialized social system that hinders the advancement of Blacks and the white poor.