On Friday, November 27, an anti-abortion extremist opened fire on a Planned Parenthood center in Colorado Springs, killing three people and wounding nine others. The assailant was arrested while still alive – even though one of the people killed was a cop. As lots of people have been pointing out, he survived because of the privileges of his whiteness.

Did ‘whiteness’ save the life of the alleged Planned Parenthood shooter? https://t.co/aOzTbB7yc6

Others have noted the gentle treatment the gunman is receiving from the mainstream press accounts of his background before the shooting. The New York Times originally referred to him as a “gentle loner”.  Then, in response to lots of push back on Twitter, the Times-edited out that word. Now, the piece refers to him instead as “itinerant”. (The NYTimes has not added an editorial note about this change.)

Still others have noted the reluctance of U.S. politicians, such as Rep. Michael McCaul (R-Texas) the head of the House Intelligence Committee, to name this act domestic terrorism. (There’s been a similar reluctance to call the white supremacists shooting of Black Lives Matter protestors an act of domestic terrorism – but more about that in another post).

The white supremacy of anti-abortion extremism goes deeper than this gunman’s deferential treatment by police, or politicians’ reluctance to speak plainly about what we can all see, or the mainstream media’s white framing of these acts of terrorism.

und in my early research of six different white supremacist organizations’ literature is that abortion is viewed as a form of racial treason (White Lies, Routledge, 1997, p.67-8). I analyzed hundreds of newsletters from these organizations over two decades (1970s-1990s) and found a consistent set of beliefs about abortion, anti-Blackness and anti-Semitism.

For white supremacists, the decline in the number of white births is directly tied to their fear of a decline in white dominance in the U.S.  In this worldview, fewer white births is due to two factors. First, they contend there are fewer white women are who are willing to become pregnant and give birth to white children. Second, they believe that white women are quick to have abortions (or easily persuaded to do so) and are nonchalant about them afterwards.

The apparent willingness of white women to have abortions is counterposed against both anti-Blackness and anti-Semitism. For white supremacists are convinced that white women are having too many abortions, but Black women are having too few. And, they believe that Jewish men (mostly as doctors) and Jewish women (as feminists and champions of abortion) are behind this as a form of racial annihilation. I saw this again and again in the text of the publications I analyzed, as well as in the illustrations. 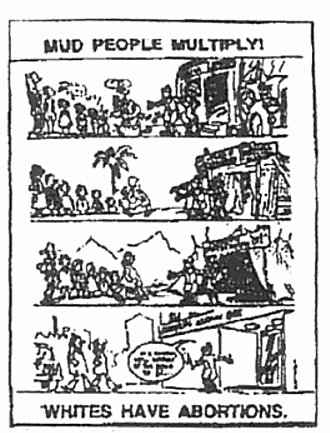 A drawing from white supremacist publication Racial Loyalty (published by Ben Klassen) highlights the anti-Blackness of their anti-abortion stance. The illustration is a series of four panels, in each one a woman enters a clinic. In the first three panels, the women are all global-majority women, and each enters a clinic designated as a “Birth Clinic,” while her numerous children wait outside. In the fourth panel, a white woman enters an “Abortion Clinic,” and the caption below the (Jewish) doctor reads, “In a moment, we’ll dispose of the child to be.”(from Racial Loyalty, no.59, 1990, p.12, cited in Daniels, 1997, p.68).

An illustration from White Aryan Resistance (WAR – published by Tom Metzger), depicts the anti-Semitism of anti-abortion extremism. In this drawing, directed at white women readers of WAR, warns of who the real culprits are behind abortion:

“Did you know that most abortionists are Jewish or other non-whites…and that the pro-abortion movement is headed by unfeminine feminist Jewesses who counsel non-whites to not get abortions…and did you know that abortionists slaughter nearly one million white babies every year? Jewish ritual murder is alive and well in the United States of America …and is very legal!” (WAR, vol.8, no.3, 1989, p.4 – cited in Daniels, 1997, p. 130).

By characterizing “abortionists” as Jewish and engaging in “ritual murder”, Metzger and his ilk are invoking a centuries old form of anti-Semitism.

A bit of an aside here: another way that Jewish people, especially feminists (almost always and exclusively Jewish) in WS rhetoric are convincing white women to not have white babies is by persuading them to be lesbians. Got me there. Queer, check. No children, check. Persuaded by many feminists, some of them Jewish. Check, check, and check. But I digress.

The message again and again throughout white supremacist literature and ideology is that abortion is a racial crime. It’s wrong when white women do it (but not others), and it’s promulgated by Jewish people, and it’s intended to harm the white race. While anti-semitism in mainstream rhetoric is more coded, the use of the term “abortionist” (instead of “doctor” or “abortion provider”) is an indication of the deep white supremacy of anti-abortion extremism.

As I did this research, I learned that the white supremacist rhetoric in these newsletters was often the exact inverse of the actual social facts of the world. This is true when it comes to abortion.

The reality is that overall number of abortions are trending downward in the U.S. for all women. According to the Guttmacher Institute, about 1.1 million abortions were performed in 2011, at a rate of 16.9 abortions for every 1,000 women of childbearing age, down from a peak of 29.3 per 1,000 in 1981. This downward trend is holds across all racial groups.

However, there is a racial gap in who gets abortions. But it’s the exact opposite of what the white supremacists’ fear it is. According to the Guttmacher Institute, 37% of abortions were obtained by Black women, 34% by Latina/Hispanic women, 22% by white women and 8% were designated as some other racial category.

The same AJPH  study also found that women of color may not have the same access to information on reproductive health and at the same time, experience pressure from their doctors to use contraceptives and to limit their family size. That is how subtler side of mainstream white supremacy works. It’s not a crude drawing about the “wrong” people having abortions. It’s a lack of access, it’s pressure from a doctor in a white coat, a side comment about family size, and an unsolicited prescription for a contraceptive. This contemporary racial gap in the use of abortion is tied to a legacy of white supremacy when it comes to Black and brown women’s bodies.

“The denial of Black reproductive autonomy serves the interests of white supremacy,” writes Dorothy Roberts, professor at University of Pennsylvania, in Killing the Black Body (Pantheon, 1997). Roberts documents this brutalization in great detail in her book, beginning with slavery and moving to the present day, Black women who were enslaved were viewed only in terms of how their reproductive lives might be profitable for their white owners. Later, in the first half of the 20th century, the eugenics movement turned contraception from a tool of (white) women’s liberation into a tool of control to cut birth rates among southern blacks, and as late as the 1970s black women were routinely sterilized by hysterectomies that were not medically necessary. More recently, Black women from economically impoverished urban areas have been routinely forced by courts, doctors, and health care organizations to be implanted with the Norplant birth-control device; doctors frequently refuse to remove it on request.

For Latina women, a similar but distinct pattern emerges that is tied to colonialism. In Puerto Rico, white researchers in sterilized as many as 35% of Puerto Rican women without their knowledge, consent or permission. In California, government officials sterilized some 20,000 people – mostly Mexican Americans under a eugenics law in effect from 1909 to 1979 (the year I graduated high school – not ancient history). While California did more sterilization than any other state, the number of eugenic sterilizations carried out in the United States in the 20th century totals roughly 60,000, according to research conducted by Alexandra Minna Stern, a professor at the University of Michigan. “Latinos were disproportionately sterilized,” Stern observes.

The real racial gap in abortions, the reality that it is disproportionately Black and Latina women who are accessing abortion services, is tied up in this legacy of white supremacy and reproductive health.

When I was doing this research into white supremacist newsletters and publications, I was sometimes shocked by the extremist rhetoric and images I saw. But at the same time, it was as if I could see many of these same ideas everywhere in mainstream culture, just dressed up in fancier clothes.

My research led me to conclude that “fringe” white supremacist rhetoric is really much closer to the mainstream discourse of elected officials, academics, and the mainstream media than most people would like to believe. This argument, which I first made in 1997, is still true and relevant for understanding anti-abortion extremism today, such as the shooting in Colorado Springs.

The mainstream political party with an explicitly anti-abortion platform in the U.S. is the Republicans, and the GOP candidates are lining up to condemn the shooting in Colorado Springs, but want to distance themselves from anti-abortion rhetoric.  The thing is, that’s a tough trick to pull off in an election that’s seen Carly Fiorina spouting crazy-talk  that precisely mirrors that of anti-abortion extremists.

And, then there’s Ted Cruz.

A Republican Senator from Texas, born in Canada to Cuban parents, has tried to distance himself from the shooting in Colorado Springs by spouting more crazy-talk about the gunman. Crazy-talk being a key GOP strategy.

But just last week, Cruz was touting the endorsement he received from Troy Newman, the anti-abortion extremist who leads Operation Rescue. Newman has a book that calls for the “execution” of all “abortionists,” a rallying cry that over 100 gunman – all of them white men – have taken literally.

“We need leaders like Troy Newman in this country who will stand up for those who do not have a voice,” Cruz said. Perhaps more than another mainstream politician, Cruz is directly linked with anti-abortion extremism and it is deeply rooted in white supremacy.

It’s important to call out the preferential treatment that the gunman in this case has received – from the arrest while alive, to the descriptions of him in the mainstream press. And, my research leads me to conclude that it’s also urgently important to understand the deep white supremacy of anti-abortion extremism. Only then will we really appreciate the scope of white terrorism.