In New York City this week, an NYPD cop was killed and another man shot just a few blocks from where I live and work. Killed was Officer Randolph Holder who was a kind and brave man, an immigrant from Guyana, and his death is a senseless tragedy. This is what everyone will say now. This is what we are all obligated to say now. The man who allegedly shot the officer, Mr. Tyrone Howard, was in a diversion program – a kind of alternative sentencing program for those with non-violent, drug-related charges.  Mr. Howard, who was also shot and injured by Mr. Holder, had no history of violence, but instead had a series of arrests for low-level drug-related charges.

Mr. Howard, 30, had made bail in February for selling crack cocaine to an undercover cop in one of the NYPD’s buy-and-bust operations that serve as the daily machinery of the war on drugs, providing overtime pay for cops and locking up a huge swath of the citizenry. Manhattan Supreme Court Justice Edward McLaughlin—acting within the law of the recently reformed harsh Rockefeller drug laws—decided Mr. Howard’s case should be sent to an alternative-to-prison system known as ‘diversion.’ There is lots of research that demonstrates these sorts of diversion programs are effective at reducing recidivism (e.g., Holly Wilson and Robert Hodge, “The Effects of Youth Diversion on Recidivism: A Meta-Analytic Review.” Criminal Justice and Behavior 2013).

Almost before the bullets had stopped flying, NYPD Police Commissioner William Bratton and Mayor Bill de Blasio questioned why Mr. Howard was not locked up to begin with. Then, a cascade of calls began that urged an end to any alternative programs began right away even though this shooting had nothing to do with the effectiveness of diversion, and Bill de Blasio (mayor of NYC) knows this.  Leading progressive voices, like Kassandra Frederique of Drug Policy Alliance, called for reason and urged New York to keep successful alternative-to-incarceration programs like diversion.

But, a reasoned debate about the merits of diversion programs has not been on offer in the mainstream, local news in New York City this week. Instead, we’ve heard a lot from Pat Lynch.

The mainstream media coverage here has been a relentless, 24/7 cycle of very narrowly focused coverage, prominent featuring interviews with Pat Lynch, the thuggish NYPD union representative.  Much of that coverage has included law-and-order headlines like this one from the New York Daily News:

Months ago, activists with Rise Up October had planned a rally for Saturday, October 24 to call attention for an end to the systematic policy brutality that takes the lives of a disproportionate number of black and brown people. They could not have known that a cop would be killed in New York just days before. What these activists were rallying to call attention to is the sustained and systematic way police kill black and brown people.

Nationally, the U.S. Justice Department does not collect data on the number of people killed at the hands of police (no federal agency does), but according to research conducted by the Malcolm X Grassroots organization, every 28 hours in 2012 a Black man, woman, or child was killed by someone employed or protected by the US government. In New York, according to the NYPD’s own Firearm Discharge Report, the overwhelming majority of those killed by police are black and brown people. 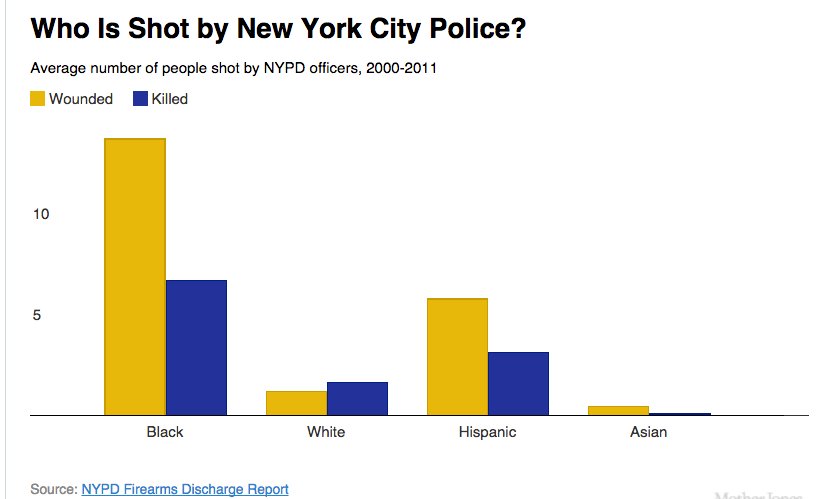 Yet, this systematic destruction of black and brown lives is lost in the media coverage that the rally was a “disgrace” and “too soon” following the death of a cop. 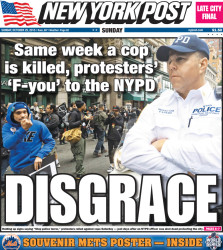 Certainly, some of my fellow citizens are saying “f-ck you to the NYPD,” as the New York Post reports on its cover today. Activist and East Harlem resident Josmar Trujillo writes about the reaction to the shooting from neighbors and long-time residents in the area. “I don’t care about them getting shot because at the end of the day they don’t care when we get shot,” Trujillo reports one resident told him. He goes on:

The young woman [in East Harlem] I spoke to wasn’t even as blunt as local young people I spoke to that simply said “Fuck ’em” when I asked about the shot cop. What about the fact that the cop was black, I asked three young men walking down 119th street the day after the shooting. “It don’t matter,” they told me. “As long as he’s wearing that patch, fuck him too.”

It’s not surprising that in a neighborhood — and a city, and a nation — where black and brown lives are not respected by police, people have no respect for the police and are unmoved by their deaths. It’s also not surprising to me that people who live under police surveillance and under the constant threat of state-sanctioned violence by the police are hearing about the death of a cop and saying, “fuck the police.” This is something people are saying.

What No One Will Say

What no one will say, at least in public with a microphone, is that since Rockefeller Reform, the law-and-order crowd has been waiting for a cop to be killed to trot out their push-back on those reforms. Just a few years ago here in New York State a coalition of progressive activists got Rockefeller Reform passed. These reforms were part of what made diversion programs like the one Mr. Howard was in possible.

The coalition of progressive groups that fought for Rockefeller Reform have been noticeably quiet in the media since Mr. Holder was killed; and, who can blame them? There’s no winning a media cycle when the mainstream media is in lockstep about a cop who has been killed.

What no one will say when a cop gets killed is that this death is collateral damage in the trillion dollar failed war on drugs and its twin, mass incarceration.  In New York City what this means is 95% of the inmates in New York City jails are African American or Latino, while these two groups make up only about half the city’s population. A majority of those in NYC’s jails are there for low-level drug offenses like marijuana and these, too, are racially biased. U.S. government surveys have consistently found that whites use drugs, including marijuana, at higher rates than do African Americans and Latinos. Nonetheless, the NYPD arrests whites for drug possession at much lower rates than it arrests African Americans or Latinos, according to research by Professor Harry Levine. Mass incarceration and the war on drugs that fuels it, are part of the engine of white supremacy in NYC and the nation as a whole.

Tyrone Howard was a man with low-level drug charges who was being forced out of public housing because of those charges.  Randolph Holder was assigned to patrol public housing. A key part of his job was patrolling public housing for people with drugs or on outstanding warrants for drug offenses. Both men were cogs in the machinery of the drug war. If we want fewer cops killed on duty, we must stop the senseless pursuit of people for use, possession or sale of drugs, and tying every other human right – including housing – to those draconian laws.

What no one will say is that Tyrone Howard’s life has ended now in a social death in our gulag of prisons as much as the physical life of Randolph Holder has ended in death.

What no one will say is the rhetoric of “blue lives matter” is white supremacy dressed up in the guise of public safety.

What no one will say is that even now, even when a cop has been killed, we have to continue to demand an end mass incarceration, and the whole law-and-order apparatus that feeds that beast.

On the very same day that the shooting in East Harlem happened, more than 130 police chiefs, prosecutors and sheriffs — including NYPD Commissioner Bill Bratton — met in Washington, D.C. They met as part of Law Enforcement Leaders to Reduce Crime and Incarceration, a group of law enforcement officials who recognize from the inside that the system of mass incarceration is broken. Rather than focusing on law-and-order solutions to a host of social problems, this group steps forward to say that reducing incarceration will improve public safety because people who need treatment for drug and alcohol problems or mental health issues will be more likely to improve and reintegrate into society if they receive consistent care, something relatively few jails or prisons offer. Mr. Bratton said that New York State and city law enforcement agencies “were well ahead of the curve in understanding that you can’t arrest your way out of the problem.”

And, then, a cop is killed and the media narrative immediately shifts into high gear with its low key “blue lives matter” agenda. The abrupt shift reminds me of the capitalists that Naomi Klein describes who wait for a ‘shock’ of some kind to strike so they can implement their brand of disaster capitalism.

What no one will say is that a cop killing is just the kind of ‘shock’ that the law-and-order opportunists needed to push forward their agenda to lock up more people.