Once again America is embroiled in a racial shouting match. We cannot even agree on how to talk about our latest racial crisis: the seemingly daily police and vigilante killings of unarmed African Americans.

This language battle was evident last spring after a group of students expressed both their concern about racial incidents at the University of Connecticut and their solidarity with the growing Black Lives Matter movement by painting “Racism at Storrs” and “Black Lives Matter” on the opposite sides of the campus “Spirit Rock” designated for student expression. 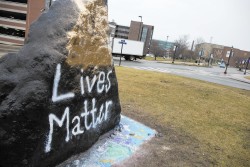 Unfortunately, it did not take long for someone to paint over the words racism and Black to express their view that there is no racism on campus and that only color-blind language that declares “All Lives Matter” is allowed there. That language battle is reminiscent of the one anti-racists won on the same campus in the mid-1990s over whether the word “White” would be allowed in the title of the White Racism course I have taught there ever since.

What was especially sad about the most recent UConn battle over words, some two decades later, was how many European Americans, both on and off campus, supported that All Lives Matter brush over as they refused to acknowledge the simple fact that African Americans, in particular, are facing what seems to be an epidemic of killings by European-American men, both in and out of uniform. Think about it. The legitimate concerns of African Americans were literally painted over!

Driven by racism-evasive politics, the whitewashing of this nation’s serious racial crisis has also been thrust onto the national presidential campaign. Hillary Clinton was criticized for the same insensitivity by also framing the issue as one of All Lives Matter. Later, after declaring that “All Lives Matter,” Martin O’Malley–another candidate for the Democratic Party nomination for president–was shouted down by African-American protestors who accused him of being indifferent to their racism-specific concern. And still more recently protestors went after Republican primary candidate Jeb Bush after he glibly denounced O’Malley’s apology as yet another example of “political correctness.”

Unfortunately, the emergence of the “All Lives Matter” slogan is much more than yet another example of color-blind ideology run amok. It officially marked the beginning of the white backlash against the Black Lives Movement that conservative media like Fox News and Republican presidential candidates like Ted Cruz, Scott Walker, and Donald Trump increasingly use to fuel their racism-driven ratings and campaigns.

This is of course nothing new: words matter in both exposing American racism and in keeping it hidden. When European Americans refer to the nation’s race relations problem they typically use vague, obfuscating, and misdirecting terms like race, the race issue, and minorities where-as African Americans and other people of color are more likely to deploy words like racism and the racially oppressed. In my recently completed study of how the social sciences in the United States mirror the larger society’s racial language I document a constant battle between what I refer to as the linguistic racial accommodation enforced by the nation’s white power structure and the linguistic racial confrontation pushed forward, whenever they can, by the racially oppressed. I found that the use of racially accommodative language like framing the nation’s systemic racism problem as its “Negro problem” or of one of simply the prejudice of a few racially-bigoted outliers is the usual state of affairs and that only when there is a successful challenge to the racial status quo is the language of the racially oppressed forced into the national discourse.

That was certainly the case in the late 1960s after civil unrest broke out in scores of American cities when a presidential commission actually identified “white racism” as this nation’s major problem. Fast forward to not long ago, nearly a half century later, when in response to Black Lives Matter protests Democratic presidential primary candidate Bernie Sanders–with the help of a recently hired African-American press secretary aligned with that movement– released the most explicit “racism and racial justice” presidential platform in American history. Sander’s platform outlines his position not only on the physical violence African Americans endure but also on the political, legal, and economic violence we face daily.

It remains to be seen how long our current racial language battle will last and what will come of it. But there is growing evidence that African Americans and other racially oppressed people will no longer allow our concerns about systemic racism to be painted over by not only conservatives but by racism-evasive progressives who attempt to promote their own legitimate concerns by whitewashing those that are specific to us. Hopefully while this battle continues it will fuel an honest discussion of one of this nation’s most important social problems; one which includes a large and robust conceptualization of systemic racism which enables us to move beyond specious debates like “who is a racist?” and whether, by some strange logic, a movement that insists that “black” lives matter in the face of what appears to be an open hunting season on African Americans by angry white men with guns somehow implies that “white” lives don’t.

~ Noel A. Cazenave is Professor of Sociology at the University of Connecticut. His forthcoming book, Conceptualizing Racism: Breaking the Chains of Racially Accommodative Language, will be released in November. His current book project is tentatively titled, Killing African Americans: Police and Vigilante Violence as a Racial Control Mechanism.