This week the U.S. Supreme Court will consider making marriage equality a reality for several same sex couples across the country. Despite this possibility, LGBT people of all backgrounds will still be fired from their jobs for being who they are, LGBT youth will continue to experience incredibly high rates of homelessness, and many LGBT people (and trans women of color in particular) will continue to face extremely high rates of violence and death. And to top things off, even if marriage equality does in fact become a reality, issues of racism, sexism, ageism, homophobia, and body shaming continue to further marginalize different groups of people in gay communities across the nation.

But none of this should come as a surprise to people who study race and racism in the U.S. Many groups have adopted the strategies and political maneuvering from the Civil Rights movement of the 60s as a means to gain political power in the U.S. while simultaneously engaging in anti-black activities. Gay communities are no different. For example, it is quite common for white gay establishments to deny entrance to Black gay men by asking for multiple ID’s, and to deny Black men access to leadership positions in gay organizations. Gay media such as magazines, films, and television often does not include men of color unless to discuss HIV/AIDS, and Black and Asian men are usually considered the least desirable as sexual and relationship partners. These realities alone should show us that LGBT communities are just as susceptible to racism as any other group. 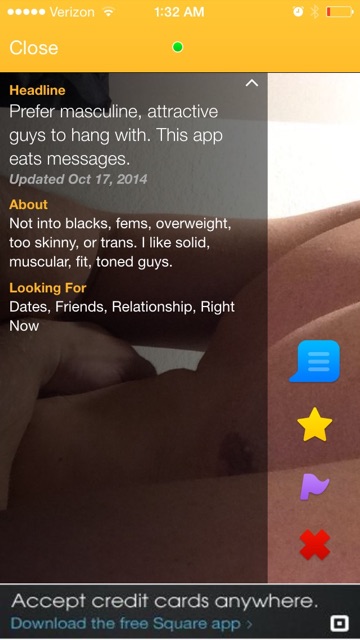 What is important to notice about this discussion though is not only who is preferred in sexual relationships among gay men, but why. Why is it that the research is showing time and time again that White men are more desired across all racial groups than any other? And why are we allowing gay White men to guide the direction of the gay civil rights movement when they are unwilling to even have this discussion about the isms and bigotry’s in our LGBT communities? It is time for us to do better, because once gay marriage passes, many gay Whites (especially many gay White men) will be happily married to each other, enjoying the privileges their Whiteness and maleness afford them while ignoring the plight the rest of us experience. Luckily some groups are fighting back and countering gay racism. If pages such  as sexualracismsex.com and the well-known Douchebags of Grindr are any indication, queer people of color are not going to drink the cool-aid much longer. 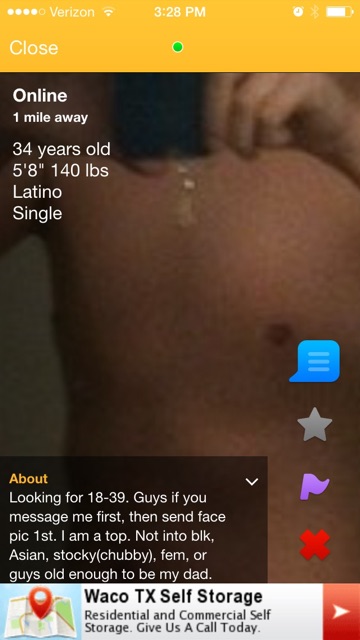 Often times the most common manifestation of racism in gay communities is online through dating sites and apps such as Grindr, Jack’d and Scruff. On these sites it is quite common too see such signs as “no fats, fems, or Asians/Blacks” sprawled across profiles. This new form of gay racism has been difficult for people in LGBT communities to grapple with and understand. It is not uncommon for White gay men to claim that desiring only White lovers is no different than desiring only men, thus conflating biological arguments of sexual orientation with racist arguments of individual preference. Yet, if we contextualize these debates within the larger social structure of a systemic racist society, we can understand why Whiteness is most preferred in gay spaces, and Blackness least. 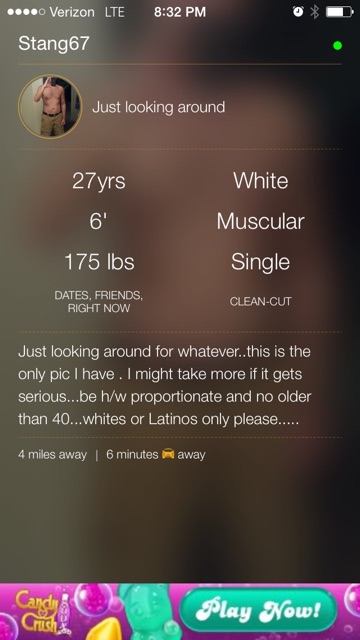 As the above profiles from Grindr demonstrate, Blackness is associated with many other forms of social undesirability such as fatness, thinness, femininity, and oldness (to name a few). We can see that all these different things represent qualities gay men have come to despise such as being out of shape, being too old so as not to be the fresh new meat on the market as well as anything feminine, much of which is tied to internalized homophobia. 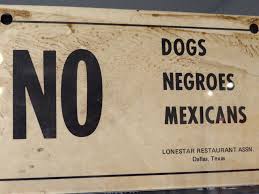 They are also the antithesis of the young, fit, masculine, WHITE man, which can be understood as desirable when viewed through a lens of European White Patriarchy. It was not that long ago when Whites were using other signs to keep people of color out from social spaces and arguing that this was the “natural” order to things.

So, even if the Supreme Court overturns the state-level prohibitions on gay marriage and marriage equality does in fact become a reality across the U.S., many in the gay community will be celebrating but not everyone will be welcome at the party.

~ Guest blogger, Jesús Gregorio Smith, M.A., is a  Ph.D Candidate in Sociology and a Diversity Fellow at Texas A&M University. He is also President of the Hispanic/Latino Graduate Student Association.