Ed Pilkington, chief reporter for the Guardian (US), reports:

In an interview with the Guardian before the release of his new autobiography, [David] Axelrod spoke in frank terms about what he perceives as the corrosive influence of race in the Obama era. The former White House senior adviser said that no other president in US history had had a member of Congress shout at him in the middle of a major address – as Joe Wilson of South Carolina did in 2009 with his notorious “You lie!” rebuke – or face persistent questions about his American citizenship, as Obama did from the so-called “birther” movement . … [Axelrod] warned that racial “fear” and hostility toward the first black US president has infected American politics and is partly to blame for Republican intransigence in confronting the president’s agenda. “The fact is, there are some people who are uncomfortable with the changing demographics of our country,” Axelrod said. “To those people, Obama is a living symbol of something they fear, they don’t like, and some of that has spilled into our politics.” 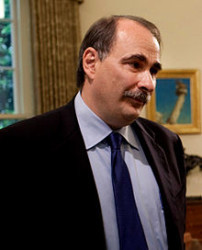 In the book titled, Believer: My Forty Years in Politics (2015) Axelrod writes that

some folks simply refuse to accept the legitimacy of the first black president and are seriously discomforted by the growing diversity of our country. And some craven politicians and rightwing provocateurs have been more than willing to exploit that fear, confusion, and anger.

That is, an entrenched white anger exists on the subject of a black man – with a Muslim name – in the White House.

The white racial frame sheds much light on Axelrod’s discussion of race-involved “fear.” As Joe Feagin explains, the racial hierarchy, material oppression, and the rationalizing white racial frame are key dimensions of the systemic racism created at the top decision-making level by elite white men. Emotions play a vital part in sanctioning white privilege so that whites can discount or disregard the unpleasant truths of racism. Such perverse obliviousness rests firmly on the safeguarding of whites’ racial selves (The White Racial Frame: Centuries of Framing and Counter-Framing).

Beyond US politics, projections on the shifting demographics of race have led to clear expressions of white racial victimization, aggrieved entitlement, and aggressive white racial framing. White elite male controlled news outlets report on anticipated trends with memorable headlines like “Whites losing majority in U.S. in under-5 group,” “White kids will no longer make up a majority in just a few years,” and “Minorities now surpass whites in U.S. births, census shows.” Undoubtedly to perpetuate racist notions of the welfare state, the latter story mentions a seemingly troublesome aside: “[T]he numbers also serve as a guide to where taxpayer dollars could be going in the coming decades.” It fails to mention where taxpayer dollars will be coming from (workers of color, increasingly).

Studies also point to discomfort among whites with regard to the changing demographics of the US, as does the Supreme Court’s 2013 decision to nullify strategic parts of the 1965 Voting Rights Act.

“Our country has changed,” explained John G. Roberts Jr. –- Chief Justice and elite white male appointed by George W. Bush in 2005. A well-known critic of the 1965 Act for nearly 30 years, and writing for the majority, Roberts explained, “While any racial discrimination in voting is too much, Congress must ensure that the legislation it passes to remedy that problem speaks to current conditions.” Roberts held that “things have changed dramatically” in the South in the nearly 50 years since the Voting Rights Act was signed. This was in spite of the fact that almost all US civil rights leaders disagreed.