On February 12, 2015, James B. Comey delivered a speech at Georgetown University that has garnered much media attention for delivering “hard truths” about racism in the United States.

Comey’s recent remarks, and those by Jonathon Capehart, Washington Post and MSNBC pundit about the Comey speech, reveal the weak, uninformed analyses of race and the evasion of the institutional, structural and systemic racism in the U.S. 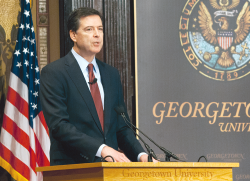 What would appear to be a welcoming speech that partially recognizes law enforcement agencies’ biased approach to policing is, however, offset by disappointing “half truths,” misperceptions and rhetorical reversals that work to deflate focus on police hyper-aggression toward people of color and ignore the systemically racist structures of the US justice system.

While acknowledging that “there is a disconnect between police agencies and many citizens—predominately in communities of color” and that relations between police and people of color is “not pretty,” Comey then proceeds to regurgitate the problematic discourse about race in the US and the weak racial analysis that focuses exclusively on racial attitudes, as with much of social science (see Zuberi and Bonilla-Silva, 2008).

Extremely troubling is Comey’s understanding that racial problems in the US exist primarily because of racial biases of individuals, a view that completely ignores institutional structural and systemic racism.

Equally troubling is Comey’s insinuation that all Americans are “racist,” a term he inappropriately uses interchangeably with racially “biased.” Comey notes that he is “reminded of the song from the Broadway hit, Avenue Q: ‘Everyone’s a Little Bit Racist.’ Part of it goes like this:

Look around and you will find
No one’s really color blind.
Maybe it’s a fact
We all should face
Everyone makes judgments
Based on race. 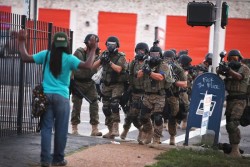 While, indeed, perceived biases exist outside (and about) law enforcement, these perceived biases often have substance and validity due to the much larger, more far-reaching realities of law enforcement biases that shape police practice. Biases of those “outside law enforcement” are much less significant in police-community relations, because citizens who interact with police do not have the power and “legitimate,” ubiquitous force (backed by clubs, guns, tasers/CEWs, and assorted military arsenal) possessed by those who enforce the law. Here we have Comey disingenuously comparing disparate forms of biases and unequalized power relations between US citizens and law enforcement, whose biases have much more weight and effect.

Comey also trips up and presents a confusing analysis when he attempts to compare the prejudice faced by early Irish immigrants with that faced by African Americans. Predictably, he presents a portrait of his white Irish grandfather as “hero” of law enforcement and exemplar of righteousness. After claiming that Irish faced discrimination by law enforcement (referencing the “paddy wagon”), he then, very confusingly, backs off this point, noting that “little compares to the experience of racial (discrimination) …of black Americans” and that “[m]any people in our white-majority culture have unconscious racial biases and react differently to a white face than a black face.” While at one point Comey mentions problems inherent in policing “communities of color,” he never addresses the large-scale police bias against Latinos, the largest community of color in the US, a point raised by Juan Cartagena at Huffington Post.

There are a number of other serious missteps with Comey’s speech. After half acknowledging problems with law enforcement’s racial biases, Comey then reverses his position and raises concerns that the “difficult conversation about race and policing has become focused entirely on the nature and character of law enforcement officers.” At this point, Comey quickly retreats from focus on police misbehavior to the “dangerous” environment of those victimized by police. Instead of maintaining focus of the history of police misconduct and discrimination toward people of color, he then begins to argue that “we all carry biases around with us” and “racial bias isn’t epidemic in law enforcement any more than it is epidemic in academia or the arts.” Here he diverts attention away from law enforcement racial biases and underestimates racial biases existing in academia and arts. Do racial biases substantially exist or not? Should we focus on law enforcement biases or not? It is hard to discern Comey’s position with this back and forth, imprecise rhetoric. At one moment in his speech, we are all biased, and at the next moment, racial biases appear to be a superficial or ancillary issue; at first, police are deemed biased, and shortly thereafter, he feels there is over-focus on police biases.

This double-talk is followed up by glorification, no longer a critique, of police who “risk their lives” and “don’t sign up to…help white people or black people or Hispanic people or Asian people. They sign up because they want to help all people.” Well, if Comey’s initial points about police racial biases toward people of color are to be taken seriously, how do we all of a sudden move to a colorblind police force? This flip-flop appears to be one of the most disingenuous moments of his speech, because in the next couple paragraphs Comey returns to a discussion of police “cynicism” toward blacks, noting that “two young black men on one side of the street look like so many others the officer has locked up. Two white men on the other side of the street…do not.” In this scenario, it does not seem that police are being equally helpful to both groups, but instead favoring one over the other.

Of serious concern is the next set arguments made by Comey when addressing the “fourth hard truth.” Comey moves even farther away from his critique of law enforcement’s historical mistreatment of blacks and issues of racism in US society by arguing that the reason “so many black men (are) in jail” has nothing to do with “racism” of “cops, prosecutors, judges and juries,” but rather blacks’ pathological criminal behavior and dysfunctional community life. This is another disingenuous, mind-numbing move that completely ignores issues of racial profiling, hyper-policing in black neighborhoods and the long history of a rigged justice system that targets black Americans (from all white juries in the Deep South to the stop-and-frisk programs and excessive prosecution of blacks for petty offenses in the Northern US).

Comey goes on to present a “culture of poverty” argument about blacks’ poor interaction with police and trouble with the law, in essence, blaming the victims of police aggression toward the black community. Next, Comey disparages black neighborhoods, black families and black individuals whose “legacy of crime and prison,” he states, represent the main problem, fully ignoring how blacks have been subject to the whims and abuses of the US justice system for centuries up until the present day. In an effort to portray criminals as blacks and crime as a black problem, nowhere in his speech does Comey address white crime (crimes that adversely affect US society on much greater scale than crimes by people of color—see John Hagan’s Who Are the Criminals?), even claiming that police do not overlook the criminal behavior of whites. However, as Chauncey DeVega’s insightful analysis of the Comey speech notes:

Police and law enforcement do in fact “turn a blind eye” to white criminals. White criminals destroyed the American economy through fraud and other illegal acts have not been punished. White people have a higher rate of drug use in the United States than African Americans and other people of color. However, the country’s prisons are full of black and brown people.

The white racial frame has even robbed American public discourse of the language to discuss the fact that there are a myriad of crimes (mass shootings, treason, domestic terrorism, etc.) that are overwhelmingly committed by white people. We have the language of “black crime;” there is no equivalent speech for “white crime.”

Toward the end of his speech, Comey acknowledges his “affection for cops” and returns to uncritical praise of law enforcement, arguing rather ignorantly that when dialing 911, “cops…come quickly whether you are white or black.” This is patently false with regard to 911 responses to problems in black neighborhoods. As Flavor Flav perceptively notes, “I dialed 911 a long time ago, don’t you see how late they’re reactin’…911 is a joke.”

Having moved away from addressing the very real systemic problems of race and law enforcement, Comey ends his speech with a one-way concern for police who have been killed in the line of duty. He completely evades acknowledging the multitudes of people of color killed and physically abused by police on a daily basis—indeed, to focus on deaths of police officers at the hands of people of color pales in comparison to the vast number of black deaths by police. Ultimately, the speech is an empty, meaningless, vexing one that deserves none of the commendations it has received by numerous mainstream media sources.

Yet, echoing many other news media pundits, Jonathon Capehart of the Washington Post offers one of many stunted, uncritical analyses of the speech, presenting undue admiration of Comey’s analytically inept discussion of race and law enforcement. 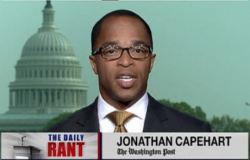 Capehart claims Comey is “no coward on race” and believes the “searing and true speech” delivers a “critical assessment” of the problems inherent in the relationship between law enforcement and race, arguing that Comey’s speech “is as important as Obama’s and Holder’s speeches on race.”

Capehart incorrectly perceives Comey’s speech as a “challenge” to US citizens “to face our nation’s flawed racial past…” If Comey even came close to meeting such a challenge, one might be able sympathize with Capehart’s ill-considered plea. Yet, Comey never addresses the racial past in any meaningful way, never addresses the structural, institutional and systemic racism that defines that past and largely places blame on the victims of racial injustices of law enforcement. Clearly, Capehart seems not to have closely read or watched the speech or, like Comey, has little understanding of the ever-present systemically racist realities of the United States.