On October 01, 2010 Sam Houston State University (SHSU) student Aman Abdulaziz  was stopped by campus police for a parking violation that quickly escalated into a police brutality incident as shown in the officer’s dash cam (and in the image below). 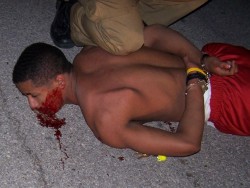 Abdulaziz is battling the charges against him and suing SHSU for civil rights violations and failure to train its officers properly. Below, students from Sam Houston State University react and offer their analysis.

As a structural phenomenon resulting from racism and other biases deeply engrained  in U.S. society, we connect this incident with the larger national racialized landscape as a social issue focused on the following questions, 1: Whose interest’s does law enforcement and security serve ? And 2: Is law enforcement and security as it currently operates in everyday operations qualified to work with diverse populations and adequately serve and protect all people?

Arij: As a Criminal Justice Major, based on the dash cam video I believe the UPD incorrectly handled the situation. It appears that because the student was of color they automatically assumed he had marijuana in his possession. There didn’t seem to be enough time for officers to establish probable cause and follow the proper procedures to warrant a legal search of Mr. Abdulaziz while accusing him of swallowing the “evidence.” I believe he evaded arrest because he felt he had done nothing wrong. While I don’t agree with him struggling as that only escalated the situation, it seems as if the attack was due to his color.

Feiyang: UPD’s are quick to identify petty things as parking violations, the very thing that had triggered this incident. Resources invested in policing traffic are so heavy that DWB’s on campus and beyond are problematic. Some of us who are not black or brown have too been effected by DWB’s when with a Black driver and having to go through the ordeal of the car and the driver being fully searched in contrast to no searches taking place during stops that had no black or brown people in the car when a traffic law was being legitimately violated.

Amanda: Given the potential dangers associated with the profession it may not be that our campus police and law enforcement throughout the nation is improperly trained (pdf), but rather their focus is skewed. Campus police are visible when anti-tolerant and pro-hate preachers degrade female students by calling them “whores” or yell homosexual hate slurs as student’s wearing LGBT alliance shirts walk by but yet are somehow invisible when a gay student is attacked by homophobic students while walking to his vehicle; the very area where the police, without fail, are quick to identify the slightest of parking infractions.

Hugo: As I transitioned to SHSU I thought things would change, but alas they have not. Both times I have been to the bookstore to get my supplies; security has trailed me to see if I stole or hid anything. The experience is unsettling and makes you question whether we have the right to feel safe by those tasked with that responsibility. Security was doing their job and I do not hold that against them, but the fact that they trailed me based on my appearance is simply outdated and put frankly a bit racist. All my life I have worked hard to maintain the upmost of virtues and qualities. Here at SHSU I came out last semester with a 3.94 GPA, was on the Dean’s list, and am currently a member of the Honors College, but they do not know that. How could they?

Matt: Jasper, Texas is a town that has been stereotyped with many unfair labels that have been thrust upon us as a result of one very terrible hate crime incident [[ http://www.baylor.edu/mediacommunications/news.php?action=story&story=100057 ]]. Having grown up in Jasper I have seen firsthand how such an incident can not only affect the good name of an entire town, but an entire group. Outsiders see Jasper as a place where “white” people are racist and openly discriminant and “black” people are ongoing victims of regular hate crimes and severe oppression. The views of outsiders of Jasper are the only factors that aid in the unrealistic divisions of race throughout Jasper; deep divisions both sides have worked through together to overcome. If outsiders were able to have the experience of being normal functioning members of the community they would see the that this false sense of division has actually brought the town together in positive ways to combat the long history of racism that Jasper as a small town shares with the rest of the nation.

Opi: Given the student was neither Black or Latino but rather of Middle Eastern descent as the name points, it shows these issues can easily implicate students of color in other groups as well as international students. Offices of International Affairs should be actively involved with campus law enforcement. The desk can help identify the issues these new students face when they come to the SHSU community. Here are some hints, lack of familiarity with new laws, language barriers, sense of fear, police brutality on the news, cultural shocks, freedom, drugs, peer pressure, etc. The UPD can look and see if the department is multicultural [[ http://www.migrationpolicy.org/pubs/multiculturalism.pdf ]] to avoid all the unnecessary media attention and costs. Hire at least two officers who can relate to the trend of international student’s origins for now and in the future.

Hugo, Amanda, Opi, Matt, Feiyang, and Arij: State universities are supposed to foster intellectual growth, diversity,  and embrace differences while nurturing multiculturalism, not provoke reservations regarding the safety of students who represent diversity and/or run them off with law enforcement and security or send students away with criminal records that are related to unjust and/or discriminatory practices, fines, traumas of any sort, and added medical bills.

In-depth training in multiculturalism that focuses on the U.S. should be required of all officers so they have a deeper understanding of the diverse national groups they are responsible for serving and protecting. This would empower law enforcement with the skills necessary to work with diverse populations and serve as much needed assets rather than detriments to society through minimizing liability issues related to police brutality and other abuse incidences.

Footage caught on dash cams, personal cameras, and cell phones, as with the John T. Williams, Rodney King, and Oscar Grant cases, have put officers in the spotlight since they are often racialized events. This systemic and institutional issue disproportionately affects people of color or specific ethnic groups negatively in contrast to white and model minority   populations.  For our country and people to come together as we seem to portray ourselves as, “we have moved past racial boundaries and accepted each other” we have to remember the past yes, and not all of it may have been good, yet we forget to live in our present and empirically measure up to the post racial image we too often suggest as a truth. Things are changing slowly and we have to hope for our future that one day Dr. King’s vision will not be scattered, but an absolute reality.