Today is Juneteenth, a celebration of the end of slavery. As you may already know, the news of the Emancipation proclamation came late two months late to Texas, and the holiday is meant to mark the arrival of that news.  What began as a regional celebration in Galveston, Texas has grown to a national commemoration. Yet, that celebration is a bittersweet one given what the reality of emancipation must have been, according to a new scholarly book. 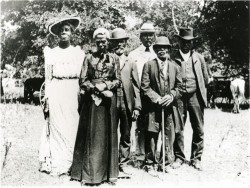 And, perhaps surprisingly, this is where I see a connection to much of the research that I’ve done on racism in the digital era. One of the ways that white supremacists and others not working against racial justice frame their discourse, is to talk about “slavery as a humane institution.”  Just to be clear, it would mean coming to the wrong conclusion to read Downs’ work as implying that slavery was better than emancipation.  It wasn’t.  Emancipation was a moral and a material victory in every sense.  And yet, at the same time, it was complicated by the crushing inequality and brutal continuation of racism after the official end of slavery that guaranteed that oppression manifested itself in the bodies and under the skin of the formerly enslaved.  Even when the physical shackles were removed, there were a hundred ways that people could still be oppressed by the lack of food, housing, and clean running water.