Scholars have long drawn parallels between laws banning interracial and same-sex marriage. The conversation came full circle Monday morning when Jodie Brunstetter, wife of North Carolina Senator Peter Brunstetter (R), explained that her husband co-authored a recent piece of anti-same-sex marriage legislation to “protect the Caucasian race.” Brunstetter continued, “The reason my husband wrote Amendment 1 was because the Caucasian race is diminishing and we need to uh, reproduce.” Placing “race reproduction” at the center of her argument, Brunstetter advocates for a positive eugenics program, a central element of traditional anti-miscegenation statues. 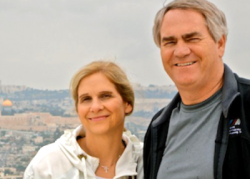 Faced with increasing interracial contact in the late 19th century, whites turned to the pseudo-science of eugenics to justify racial segregation. Eugenicists argued that both the physical and character traits of individuals are biologically determined, and thus the genetic quality of society can be made better or worse through artificial selection. Whites were attracted to eugenics because they assumed the superiority of the white race and the importance of racial separation, but they feared, and eugenics proved “proof,” that interracial sex would result in future generations dominated by “inferior” racial characteristics. Thus, a positive eugenics program was required to guarantee the longevity of the white race. Central to this program, was legislating the prohibition of interracial intimacy. One of the most notable pieces of anti-miscegenation legislation is Virginia’s Racial Integrity Act of 1924.

Desiring to maintain the “racial integrity” of the nation as well as their dominant position, white Virginians once passed the Racial Integrity Act, a law forbidding whites from marrying anyone of another race. Limiting marriage to persons of the same race, the Virginia law sough to ensure the reproduction of the white race and prevent the “deplorable evil” of interracial sex.

The amalgamation of the races is not only unnatural, but is always productive of deplorable results. Our daily observation shows us, that the offspring of these unnatural connections are generally sickly and effeminate, and that they are inferior in physical development and strength to the full-blood of either race. It is sometimes urged that such marriages should be encouraged, for the purpose of elevating the inferior races. The reply is, that such connections never elevate the inferior race to the position of the superior, but they bring down the superior to that of the inferior. They are productive of evil, and evil only.

This except from Justice Brown’s opinion is indicative of the eugenicist ideology dominating the courts of this time. Primarily concerned with “reproducing the race” and maintaining the “racial integrity of the nation,” anti-miscegenation laws presented a positive eugenics program much like that advocated by Brunstetter. However, such laws also had a damning impact on white women… confining them to the one role of mother.

Fueled by eugenicist rhetoric, whites argued against education and careers outside the home for white women, charged them to reproducing the race. According to eugenicists, changes in traditional gender roles equates to racial suicide and thus women were should be confined to their “birthing duties.” As historian Lisa Linquist Dorr [[]] explains, “social stability depended on the controlling of women’s sexuality as a means of assuring they were virtuous enough to raise virtuous children.” Dorr continues:

Eugenic supporters of the Racial Integrity Act articulated a central concern: women, intoxicated by the exciting adventures of youth, might ignore the opinions of their elders, their traditions, and, ultimately, their racial pride, which, because of women’s reproductive capacity, was especially important.

Reflecting on the eugenicists rhetoric motivating anti-miscegenation law, there are parallels between anti-interracial and anti-same-sex marriage advocates such as Brunstetter. Arguing America was “founded by whites,” Brunstetter is establishing America’s racial genealogy which must be “preserved” through guaranteeing white procreating. Because gay and lesbian couples lack this ability, Brunstetter deems their relationships null and void. Situating reproduction at the center of her argument, Brunstetter also confines white women to their “birthing duties” advocated by eugenicists

Since making the original comments, Brunstetter has insisted her comment “wasn’t anything race related” and “they [democrats] have made it a racial issue when it is not.” However, Brunstetter has not been able to explain her use of explicitly racial rhetoric in an allegedly non-racial conversation. Placing Brunstetter’s comments within a larger sociohistorical context, her arguments against same sex marriage heavily coincide with those used against interracial marriage.