White women are at the forefront of the Tea Party, a political movement that’s trying to move American backward on race and civil rights.   Sarah Palin, former Vice Presidential candidate, half-term governor of Alaska and likely presidential candidate in 2012, is the charismatic leader of the Tea Party movement, if not the official head of it.  Palin has a new book, America by Heart, due out soon (just in time for pre-presidential-run campaigning).  In passages leaked from the book on perceptions of racial inequality in the U. S., Palin slams President Obama, who, she asserts, “seems to believe” that “America — at least America as it currently exists — is a fundamentally unjust and unequal country.” And then she goes after First Lady Michelle Obama:

“Certainly his wife expressed this view when she said during the 2008 campaign that she had never felt proud of her country until her husband started winning elections. In retrospect, I guess this shouldn’t surprise us, since both of them spent almost two decades in the pews of the Reverend Jeremiah Wright’s church listening to his rants against America and white people.”

Sarah Palin’s dog-whistle racism should be no surprise to anyone that has followed her or paid attention to the rise of the Tea Party.  (She’s wrong, of course, but that’s another matter.) In fact, recent research from The Nation Institute‘s Investigative Fund, documents the ways that the Tea Party is working hand-in-glove with white Patriot movement radicals — many of whom have close ties to neo-Nazis and anti-government armed militias (reported by Alternet).  Yet, what many writers on the left are missing in this important story is the key role that white women are playing in the movement.  Sarah Palin is not the only woman involved in the Tea Party.  At a recent Tea Party rally in Paducah, Kentucky, singer Diana Nagy performed for the crowds (pictured below). 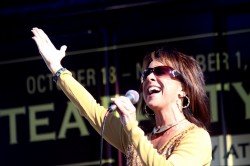 Nagy’s song, “Where Freedom Flies,” (she composed and sings it) has become something of an anthem for the Tea Party movement, and Nagy something of a poster girl.   The song is in the genre of Lee Greenwood’s “I’m Proud to be an American,” and it’s fine if you like that sort of tune: heavy on the patriotic lyrics, light on the social criticism, and completely devoid of a driving back beat. The video of her song on YouTube, is a short clip (2:01) with about 19,000 views.  There are a couple of telling features of the video: the images used and the link at the end.   The song is meant to be a tribute to those serving in the military (although, presumably not the gay/lesbian soldiers – but I digress).  It makes sense that the images used in the video would all be of soldiers, but after the first :30 seconds or so (flags, promotional slide of Nagy, another flag), all the images of soldiers are almost entirely white (near the end the backs of two men are shown that may be men of color, but it’s hard to tell).  Maybe it’s a coincidence, but I suspect it’s part of the larger iconography of the Tea Party, which is intentionally appealing to white peoples’ fears, rooted in racism.  It’s the end of the video clip which is the most telling, however, as it invites viewers to “get the entire song” at MoveAmericaForward.org.

As it turns out, MoveAmericaForward is another far-right group, also run by a white woman, Melanie Morgan (pictured below). 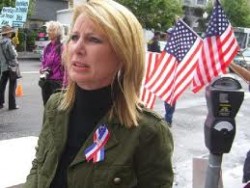 Morgan, along with Howard Kaloogian (another Tea Partier), formed Move American Forward in 2004 as a pro-war group. According to SourceWatch, Morgan gained national notoriety in the summer of 2006 when she suggested that Bill Keller, an editor of The New York Times, be killed in a “gas chamber” for the crime of “treason” after the Times’ reporting on US government spying on Americans.  Perhaps that’s just Morgan’s brand of hyperbole, but when I hear someone suggest “gas chambers” I immediately conjure Nazis and antisemitism, but maybe that’s just me.  She seems undaunted by criticism that she might be fomenting racism and antisemitism with her remarks.

In a July 2007 appearance on MSNBC’s Hardball with Chris Matthews, Morgan repeated her claim that Keller and other journalists who reported on the government’s SWIFT program for tracking terrorist bank transactions “should be tried for treason. If they were found guilty of treason, I would have no problem with them being executed.”  Morgan continues to make such claims on her website, and, is a promoter of Sarah Palin and the Tea Party.   Today, the underlying MoveAmericaForward message is conveyed in the website’s imagery: soldiers are white, terrorists are black, and the government needs to be “taken back,” preferably by George W. Bush.

So, why does it matter that these are white women, and what does it have to do with race? It matters for a few reasons.

I’ll be back tomorrow with Part 2 of “White Women, Race Matters,” in which I’ll explore the media and cultural portrayal of white women beyond the realm of political parties.