On his June 18 radio talk show, Glenn Beck discussed his upcoming “Restoring Honor” rally, which is scheduled to take place this coming August 28th at the Lincoln Memorial in Washington D.C.  If Beck’s earlier “Rally for America” (2003), the finale of his book promotion tour through “real America” is any indication, there will be lots of flag waving, honoring the troops, and some relatively small crowds.  But he has something else in mind for this rally. 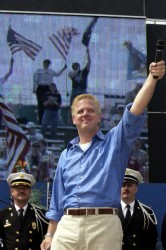 As Beck noted, August 28 marks the 47th anniversary of Dr. Martin Luther King’s famous “I Have a Dream” speech. What critical, progressive commentators can only recognize as an absurd, disgusting irony befitting life in the 21st century “bizarro world” of contemporary racial relations, Beck regards himself and the event as ordained by no less than God:

“what an appropriate day – at first we picked that date and we didn’t know and I thought ‘oh geez,’ but now I think it was almost Divine providence… I do.”

In his characteristically melodramatic style (and despite the fact that his initial hesitation suggests he, himself, questioned the appropriateness of doing so) Beck ran with the symbolism, sentimentally opining on June 15:

“As we create history together, your children will be able to say ‘I remember. I was there,’ as we… as we pick up Martin Luther King’s dream that has been distorted and lost. It’s time to restore it, and to finish it.”

There are perhaps no better words to capture the perfectly incongruous nature of this association than those provided by the master of satire, Stephen Colbert: “Finally, someone is bringing Martin Luther King’s movement back to its conservative white roots” (The Colbert Report, June 23).

Indeed, the idea that Glenn Beck or his scheduled guests (which include Sarah Palin and the NRA’s Wayne LaPierre and Ted Nugent) should assume the mantel of restoring King’s dream is beyond perverse. Recent articles by Dennis Henigan and Paul Helmke expose the track records of the individuals involved in planning this event, and with those, demonstrate what an offense this event is to the civil rights legacy of Dr. King. Among many gems from NRA Board Member, Ted Nugent, is his public declaration that South Africa’s apartheid wasn’t that “cut and dry,” because “all men are not created equal. The preponderance of South Africa is a different breed of man.” Is the wicked irony of the NRA’s celebrated presence at an event shrouded in the legacy of the assassinated leader, whose entire platform was built on peaceful, nonviolent protest, lost on everyone organizing this event?

Beck, for his part, has been at the conservative right forefront of what anti-racist writer/educator Tim Wise has cleverly labeled the “Cult of White Victimhood,” and their calls of “faux-pression”. In fact, Beck has not only argued that President Obama’s policy agenda is driven by “reparations” and the desire to “settle old racial scores,” (an absurd claim, the legitimacy of some form of restorative justice notwithstanding); he boldly claimed on Fox News that Obama was a “racist” with a clear “deep-seated hatred for white people.”

Stepping back from the obvious problems of Beck’s rally, however, we should contextualize white conservatives’ embrace of Dr. King’s legacy and civil rights rhetoric in a larger
framework. This latest example is part and parcel of an increasingly commonplace exercise in colorblind racism. Whites frequently invoke memories of the civil rights movement and the beloved Dr. King as a maneuver of positive self-presentation, evidence of the progress we have made in society. While the intentions of such whites may be “good,” the rhetoric remains problematic nonetheless, as it is often employed to invalidate the persistence of ongoing interpersonal, institutionalized and structural racism.

More malevolent and concerning, however, is the way in which white conservatives are increasingly invoking the civil rights legacy to support the actual dismantling of civil rights victories. Tragically, the paradoxical invocation of civil rights rhetoric has become a contemporary means by which the racial status quo of white supremacy is restabilized and even strengthened against further attack. Consider the way in which “civil rights” have been rearticulated in the battle over affirmative action. In the past several years “Civil Rights Initiatives” groups have emerged in numerous states, including Michigan, Washington, California, Nebraska, Colorado and Arizona. While the name might suggest otherwise, these groups have successfully introduced “civil rights” proposals in the past 2006 and 2008 November election ballots that would ban affirmative action in government hiring and university admissions.  (In at least one case, the U.S. District Court found that the Michigan Civil Rights Initiative had engaged in systematic voter fraud, as individuals recruited to sign the anti-affirmative action petition were led to believe the ballot initiative was actually in support of affirmative action.   This suggests just how distorted “civil rights” rhetoric has become in recent years.)  Indeed, affirmative action has been rendered largely impotent in wake of these types of legal battles, including several key Supreme Court decisions.

Similar rearticulations of “civil rights” abound. Affirmative action re-coded as “reverse discrimination”; health care and economic reform reframed as “reparations,” with the implicit understanding that something is being taken from innocent whites and redistributed to undeserving blacks; fellowship and scholarship programs originally designed to increase the representation students of color in various programs literally struck down under the Civil Rights Act of 1964!

In this upside-down climate, conservatives like Beck and other “Cult of White Victimhood” members unflinchingly argue that they are the true defenders of civil rights, as they work to erode the hard fought gains of people of color and protect normative white dominance. With no-end in sight, the need for critical scholars, activists, and citizens to publicly deconstruct the political rhetoric of so-called “civil rights” in the 21st century, and reappropriate and protect the civil rights symbols of our past is nothing short of urgent.