People often ask me if I believe in “progress.”  By that, they usually mean, do I think there’s been “progress” in the way this country deals with racism.  I usually answer by saying, “I believe in struggle,”  paraphrasing Frederick Douglass’ famous quote:  “If there is no struggle, there can be no progress.”   There was some good news in the struggle toward racial justice today.   Here’s a brief recap: 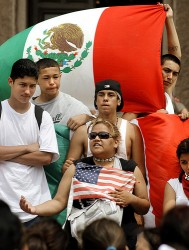 These changes are good news and evidence that struggle can create progress, but make no mistake – these are small changes.    And, these small changes that took large numbers of people, several agencies and non-profit organizations, and legislators to create.

There still remains a lot of work to be done around drug policy and around immigration reform.   Drug laws are perhaps the centerpiece in the racial caste system of that is the U.S. criminal justice system.   Arizona’s Maricopa County Sheriff Joe Arpaio says that he will arrest any one protesting the immigration law there.

If and when big change comes in these arenas, it will be because people worked and struggled to make change, not because there is some inevitable, progressive trend toward racial equality.