Today, I visited PS1-Contemporary Arts Center and discovered the fabulous work of Hank Willis Thomas, an artist exploring the commodification of black bodies by corporate advertisers.  The exhibit I saw was called “Unbranded” is a series of images taken from magazine advertisements from 1968 to the present, such as this one from 1978 of an advertisement for pancakes.  The artist removes all text and logos to “reveal what is being sold,” and alters nothing else of the image. 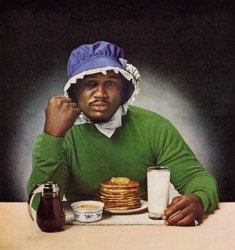 In statement about this work, Thomas writes:

“I believe that in part, advertising’s success rests on its ability to reinforce generalizations about race, gender, and ethnicity which can be entertaining, sometimes true, and sometimes horrifying, but which at a core level are a reflection of the way a culture views itself or its aspirations.  By ‘unbranding’ advertisements I can literally expose what Roland Barthes refers to as ‘what-goes-without-saying’ in ads, and hopefully encourage viewers to look harder and think deeper about the empire of signs that have become second nature to our experience of life in the modern world.”

Although Thomas’ work includes images of black men and women, he says that he is most interested in exploring the “link between the commodification of African men in the slave trade and the use of black bodies to hawk goods from credit cards to Nikes today.” Thomas’ earlier work, Branded, deals explicitly with branding, from the product logos plastered on athletes and rap stars to the markings that identified slaves.  In an interview Thomas says:

“I think that the irony of the ideal of the black male body is interesting…it is fetishized and adored in advertising but in reality black men are in many ways the most feared and hated bodies of the 21st Century. The majority of this work comes out of the experience of losing my cousin Songha Thomas Willis – he was killed because he was with someone who was wearing a gold chain. It is this idea – that someone could be killed over a tiny commodity. In NYC in the 1980s, people were killed over sneakers and backpacks. Songha was someone who survived DC when it was the murder capital of the country and then came home to Philly and was killed over a commodity. I want to question what makes these commodities so precious that they are worth defining and more importantly taking another person’s life?”

The work is beautiful, thought-provoking, compelling, disturbing – like art should be, in my view.  If you can get to PS1, make sure you see “Unbranded.” If not, you may want to check out Thomas’ online portfolio or his monograph, Pitch Blackness.