It is hard to find humor in the officially sanctioned nativism of Arizona legislators and other white legislators targeting brown people, especially immigrants these days. But here is a “deprofiler” website that is “selling” white masks for folks to wear to avoid the “reasonable suspicion” clauses of anti-immigrant legislation. Now you can buy “a friendly white person’ face”: 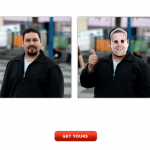 ¡Feliz Cinco de Mayo! Here is one wikipedia summary of the holiday and its meaning:

Cinco de Mayo (Spanish for “fifth of May”) is a voluntarily observed holiday that commemorates the Mexican army’s unlikely victory over French forces at the Battle of Puebla on May 5, 1862, under the leadership of General Ignacio Zaragoza Seguín. It is celebrated primarily in the state of Puebla and in the United States. While Cinco de Mayo has limited significance nationwide in Mexico, the date is observed in the United States and other locations around the world as a celebration of Mexican heritage and pride. Cinco de Mayo is not Mexico’s Independence Day [celebrated in September].

Americans of Mexican ancestry are facing much in the way of nativistic and racist attacks these days, including anti-immigrant xenophobia, as we have recently blogged about on this website.
Recently, they and their supporters in other groups, tens of thousands of people, have organized large-scale protests in favor of antidiscrimination public policies, and of fair treatment of immigrants of all types–and thus of expanded freedom and liberty in the U.S.

Yet the mainstream mass media seem to pay much more attention to the protests of right-wing, mostly white groups, who often protest in much smaller numbers, such as the tea baggers. I wonder why that is?