At last count, the clashes that erupted on January 17 2010 in Jos (capital of Plateau State in Nigeria), had claimed the lives of about 360 people and displaced over 20,000 families as told by officials. This incident of cultural conflict in Nigeria represents the latest in the chronic antagonism between Muslims and Christians. In these parts, there is great overlap between ‘ethnicity’ signifying cultural characteristics or traits and religious identification so that one’s religion may be a descriptor of one’s ethnicity. The recent spate of killings in Jos has occurred between Christians, who are largely non-Hausa, and Muslims who are predominantly of the Hausa ethnic group.

I recall several weeks ago as these ethno-religious killings were going in Jos that I took my aged wagon to a local franchise auto shop for a routine check-up. The mechanic working on my car must’ve detected an accent when I spoke, so he asked me: “Where are you from,” and in my attempt to deflect this line of questioning, I retorted: ‘Baltimore!” He said, “Really, where are you from? You’re from Africa? Where?” To which I answered: “Does it make a difference?” “Yes, it does, to me,” he shot back. He was insistent and he kept at it: “So, where are you from?” Finally, I gave in and told him where I was born.  But, the mechanic was not done – he wanted to know which ethnic group, which tribe, I belonged to. I was becoming impatient with this conversation about my birthplace and ethnicity. I asked him: “What do you care, which tribe I belong to?” I was being direct so he could drop the topic, but he won’t let it drop; “It matters, he said.” I was incredulous, so I asked him: “How does it matter?” His best come back was: “I just want to know!” So, I finally yielded and told him which ethnic group I belonged to – I figured that if this gentleman was going to work on my car, I didn’t want to antagonize him. He then told me where he was born (I had figured as much) and then he proclaimed his ethnicity, although I hadn’t asked him and really didn’t care to know.

As I left the shop, I realized I wasn’t completely surprised by this exchange. In our presentation of self as black immigrants, we rely on cultural and other descriptors to signify who we are. For most African immigrants, calling up one’s tribe or ethnicity is a way of overcoming the master status based on phenotype. We want to be more than just ‘black.’ The exchange I had at the auto shop brought into focus the continuing relevance of ethnic identity and its role in inter-communal conflict in Africa. But the bearing of ethnic identity is not the same for the immigrant black and the indigene in Africa.

As I reviewed the latest data on ethnic identification in Africa from the AfroBarometer Round 4 Surveys, my focus, as I’ve noted in previous posts here, was on the extent to which ethnic identity becomes the basis for inter-communal conflict.  In my earlier posts, I have presented data tracking ethnocentrism and conflict in Africa.  In this post, I provide updates on the prevalence of ethnic identity from recent survey data collected by AfroBarometer in 2008.

Round 4 of the AfroBarometer Surveys were conducted in 18 countries in 2008, drawing a sample of 26,414 respondents with proportionate representation to capture the distribution of ethnic diversity in each of these countries. I culled published summary data on five core items that track the intensity of ethnic identification: these data are based on responses to the following questions: (1) I feel only ‘ethnic’ (respondent’s ethnic group). (2) I feel more ‘ethnic’ than ‘national’ (respondent’s nationality). (3) I feel equally ‘national’ and ‘ethnic’. (4) I feel more ‘national’ than ‘ethnic’. (5) I feel only ‘national.’  The root question for this set of items is: “What is your tribe or ethnic group?’ 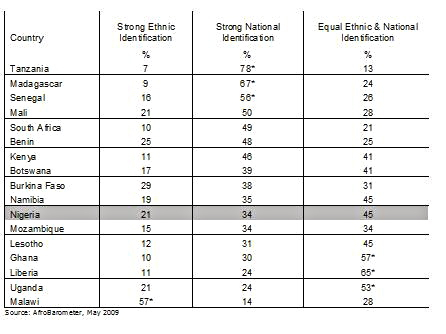 So, what do these data tell? In Tanzania (78%), Madagascar (67%) and Senegal (56%), more respondents relied on their nationality as a descriptor than in any other surveyed countries. The prevalence of ethnic identification (and ethnic attachment) in these countries is low. On the other hand, Malawi is the only country with more than half of its respondents identifying primarily with their ethnic group. When we compare the proportions for the item “I feel equally ‘national’ and ‘ethnic’,” more Liberians (65%) followed by Ghanaians (57%) and Ugandans (53%) report feeling equally ethnic and nationalistic. Slightly less than half of surveyed Nigerians (45%) report this sentiment (credit eric). Overall, more respondents in most countries chose “strong national identification” or “equally ethnic and national.”

My contention that more Nigerians would choose ethnic identification also did not bear out – and this is propitious. Nigerians are comparatively no different from most of the other Africans surveyed in terms of their feelings about ethnic identity. So, it is puzzling how community misunderstandings devolve into such violent acts of killings and maiming in Nigeria (or more precisely, some parts of Nigeria). Some reports have argued that the recent troubles in Jos were perpetuated by thugs and fuelled by social disadvantage. If this is indeed the case, where were the officers of peace who are responsible for diffusing tensions and maintaining order? The killings went unabated for several hours before the military was called in to restore order. Perhaps the trajectory of these violent incidents reveals a certain level of state weakness in its inability to quell mob behavior?

These data are encouraging and may exhort us to think that ethnocentrism is on the wane in Africa. But we cannot forget what extreme ethnic identification and attachment has wrought in the past decade: brutal killings in Rwanda, ethnic war that convulsed Ethiopians and Eritrea, civil wars in Liberia and Sierra Leone, ethnic violence that threatened to divide Cote d’Ivoire, ethnic war that has ravaged Sudanese in the South, sporadic ethnic killings that occur in Northern Ghana between Kokomba and Nanumba ethnic groups, ethno-religious violence in Nigeria, violent separatist movement in Southern region of Casamance in Senegal, the wars in the Congo Democratic Republic and Angola.

In Angola, two officials of the Togolese national soccer team were killed and the reserve goalie was seriously wounded in the Cabinda region during the Conference of African Football (CAF) tournament that just ended in January 2010. The bus in which the Togolese were riding was shot at by Cabinda separatists. The cause for the violent separatist movement in Cabinda is a certain ethno-cultural distinctiveness.