Over at dailykos.com blog Meteor Blades has a nice commentary on the new album of Cree Indian folksinger Buffy Sainte-Marie, accompanied on a long tour by a 5-piece all-Aboriginal band. 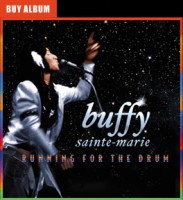 One song in which includes these critical words on U.S. capitalism and racism:

Ol Brother Midas lookin hungry today
What he can’t buy he’ll get some other way
Send in the troopers if the Natives resist
Same old story, boys; that’s how ya do it , boys

Hundreds marched in Glasgow, Scotland yesterday in a rally (opens short video, 1:17) to call for an end racism.   According to this report, the march and rally were organized to remind people of the dangers of allowing prejudice and discrimination to go unchallenged, and was organized by the STUC, a labor union.   Reading the news about this anti-racism rally in Glasgow got me wondering, why aren’t there more of these in the U.S.?  While I recognize that a rally is not the same thing as a social movement, but it is noteworthy that the only time there’s an anti-racism rally here, it’s in response to a KKK (or other white racist group) rally, and there’s not a sustained anti-racist movement in the U.S.

There’s some recent research by sociologists Jill McCorkel and Jason Rodriguez that may shed some light on this question (recently highlighted in Contexts).   McCorkel and Rodriguez explored the experience of those who participate in movements dominated by people of other races, specifically, they used multi-year participant observation to study how white people become accepted in civil rights organizations dominated by African Americans (e.g., “pro-black” abolitionism and “conscious” hip hop). They found that white people are rarely recruited into such organizations and, when a white person seeks membership, they’re often relegated to “supporter” roles rather than given full membership. In order to move into the core of the movement, white people had to prove their “realness”— that is, their commitment to political struggle. But regardless of their efforts to “fit-in,” white ­participants in black social movements never could become full members. (You can read the entire article in the journal Social Problems, March 2009).

While McCorkel and Rodriguez’s research is focused more on the challenges that an influx of progressive, anti-racist whites posed to two racially progressive movements, their research also suggests a few speculative explanations for why there’s not a robust anti-racist movement in the U.S.  First, it suggests that whites are rarely seen as natural allies by people leading organizations focused on racial equality.  Further, it suggests that anti-racist whites are not organizing among themselves to form a movement against racism, but rather are seeking out organizations dominated by African Americans.    Yet, once in those organizations, anti-racist whites must do the work of proving their “realness” to others rather than engaging work that might change structural inequality, dismantle institutional racism, or raise the consciousness of other whites.  Perhaps anti-racist whites who want to see real social change should work on doing something to change the school-to-prison pipeline, as just one example, rather than trying to get demonstrate how “real” they are.

Or, maybe like whites in Glasgow, whites here in the U.S. could organize an old-fashioned anti-racism rally.

Racism and unconscious bias in medicine is a persistent problem in the delivery of medical care in the U.S.   Now, it seems there may be a way to use virtual simulations to teach doctors how to recognize racism.

I wrote here recently about the racism in virtual worlds that some researchers.  Other researchers at the University of Florida have been using the same technology subvert the trend toward racism among medical doctors.

Take a look at this short video (1:31) about new research using virtual worlds to teach doctors to recognize racism (sorry, no video embed available). Finally, a promising use of new technologies to address racism.