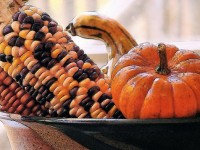 The Myth:
The Pilgrims landed in 1620 and founded the Colony of New Plymouth. They had a difficult first winter, but survived with the help of the Indians. In the fall of 1621, the grateful Pilgrims held their first Thanksgiving Day and invited the Indians to a big Thanksgiving-Day feast replete with turkey and pumpkins.

The History:
In 1614, a band of English explorers landed in the vicinity of Massachusetts Bay. When they returned home to England, they took with them Native slaves they had captured, and left smallpox behind. By the time the Puritan pilgrims sailed the Mayflower into southern Massachusetts Bay, entire nations of New England Natives were already extinct or greatly disseminated due to disease.
There was indeed a big feast in 1621, but it was not “Thanksgiving.” It was a three-day feast described in a letter by the colonist Edward Winslow. Moreover, it was a shooting party; there was neither a “Thanksgiving Day” proclamation, nor any mention of a 1621 thanksgiving celebration in any historical record.

The history of the colony was chronicled by Governor William Bradford in his book, History of Plymouth Plantation (written circa 1650, republished in 1968 by Russell and Russell publishers). Bradford relates how the Pilgrims set up a “geoist” system (a merger of what we now understand as libertarianism and communism). The land was owned in common and could not be sold or inherited, but each family was allotted a portion, and they could keep whatever they grew on that portion. As Governor Bradford describes it, “At last after much debate of things, the governor gave way that they should set corn everyman for his own particular… That had very good success for it made all hands very industrious, so much [more] corn was planted than otherwise would have been.”
Yet, poor harvests prevailed, especially over the summer as the rains stopped. In response the Pilgrims held a “Day of Humiliation” in which they fervently prayed. The rains finally came in the fall and the harvest was saved. Many of the Pilgrims saw this as a sign that God blessed their new economic system and Governor Bradford proclaimed 29 November 1623 a “Day of Thanksgiving.”

This was the first proclamation of thanksgiving found in Bradford’s chronicles or any other historical record. Much later, this first “Day of Thanksgiving” was confused with the shooting party of 1621. Until approximately 1629, there were only about 300 Puritans living in widely scattered settlements around New England. As the numbers of Puritans grew, the question of ownership of the land became a major issue. It was clear to the new Puritans that there was no definite claim on the land because it had never been subdued, cultivated, and farmed in the European manner. The land was seen as “public domain.” This attitude met with great resistance from the original Puritans and so they were summarily excommunicated.

The excommunicated Puritans and others that wished to find new lands, decided to push further West away from the sea. Joined by British colonizers, they seized land, took Natives as slaves to work the land, and killed the rest. When they reached the Connecticut Valley around 1633, they met a different type of force. The Pequot Nation, a large and powerful nation that had not entered into any peace treaty as other New England Native nations had done. When two slave raiders were killed by resisting Natives, the Puritans demanded that the killers be turned over. The Pequot refused. What followed was the Pequot War, the bloodiest of the Native wars in the northeast. Pequot villages were attacked and Pequot were sold into slavery in the West Indies, the Azures, Spain, Algiers and England; everywhere the Puritan merchants traded. This rather forgotten aspect of the trans-Atlantic slave trade was so lucrative that boatloads of 500 at a time left the harbors of New England.

In 1641, the Dutch governor of Manhattan offered the first scalp bounty; a common practice in many European countries. This was broadened by the Puritans to include a bounty for Natives fit-to-be-sold for slavery. The Dutch and Puritans joined forces to exterminate Natives from New England. Following an especially successful raid against the Pequot in what is now Stamford, Connecticut, the churches of Manhattan announced a “Day of Thanksgiving” to celebrate victory over the “heathen savages.” This was the second Day of Thanksgiving that was officially celebrated. It was marked by the hacking off of Native heads and kicking them through the streets of nearby Manhattan.
The killing took on frenzied tone, with days of thanksgiving held after each successful massacre. Even the relatively friendly Wampanoag did not escape. Their chief was beheaded, and his head placed on a pole in Plymouth, Massachusetts—where it remained for 24 years. Each town held thanksgiving days to celebrate their own victories over the Natives until it became clear that an order for these occasions was needed. It was George Washington who brought a system and a schedule to thanksgiving when he declared one day to be celebrated across the nation as what we now know as “Thanksgiving Day.” And it was Abraham Lincoln who decreed Thanksgiving Day to be a legal national holiday during the Civil War (on the same day he ordered US troops to march against the Lakota nation in Minnesota).

Why Myths Matter:
That we believe in such myths is not, in and of itself, shocking. And that the US has achieved “greatness” through criminal brutality on a grand scale is not news. These arguments have been well-rehearsed and mud-slinging for its own sake does little. This myth matters because it can serve the purposes of unethical and anti-democratic interests.
A key vehicle for taming history toward such narrow interests, remain our various patriotic holidays, with Thanksgiving at the heart of our social myth-building. From an early age, we are taught a wonderful story about the hearty Pilgrims, whose search for freedom took them from England to Massachusetts. There, aided by the friendly Indians, they survived in a new and harsh environment, leading to a harvest feast. It is a disturbingly pleasant fiction.

Since history is not stable, but open to protestation and debate, I propose we replace our social practices of remembering “Thanksgiving Day” with fasting and/or service to the homeless and hungry, done together with our families and our friends. Some indigenous people have offered such a model; since 1970 many have marked the fourth Thursday of November as a Day of Mourning in a ceremony on Coles Hill overlooking Plymouth Rock, Massachusetts, one of the early sites of the European invasion of the Americas.

Matthew W. Hughey, Ph.D. is an Assistant Professor of Sociology at Mississippi State University. His current research investigates racial identity formation, racialized organizations, and mass-media representations of race. He can be reached at MHughey@soc.msstate.edu