Today is gay pride in New York City and it marks the 40th anniversary of the Stonewall uprising.   What comes to mind when you think of gay pride?  If you’re like most people, it’s an image of white, gay men.   Just as in the dominant straight culture, image-making in the gay subculture has been dominated by white men who have constructed their own images.   The reality is that there were Black and Latina women at the Stonewall on June 28, 1969, although you rarely hear about them.   One of those people was Sylvia Rivera, a transgendered Latina (image of Sylvia Rivera, Fall, 1970 from NYPL Digital Gallery).  Rivera, who identified as a “street transvestite” in the days before the neologism “transgendered,” was always clear about the connection between homophobia from straight society and the racism and class privilege within the gay community.  See her, for example, this video interview. 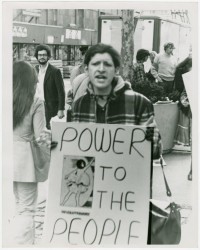 When Sylvia Rivera passed away in 2002, her dying wish was that her community of faith, Metropolitan Community Church of New York (MCCNY), reach out to homeless LGBTQ youth.  Today, MCCNY Charities maintains an overnight shelter, 365 days a year, for homeless queer youth in New York City.  The shelter is called Sylvia’s Place and is part of Homeless Youth Services at MCCNY.

Since January of this year, photographer Josh Lehrer as been chronicling the lives of some of the transgendered teenagers that call Sylvia’s Place home. In a project he calls “Becoming Visible,” a series of 80 16-by-20-inch cyanotype portraits of these young people. Some of the photos are featured on The New York Times’ photography blog, Lens, and it’s worth your time to click through and look at the slide show.  Are these the people you think of when you think of gay pride?  Perhaps not until now.