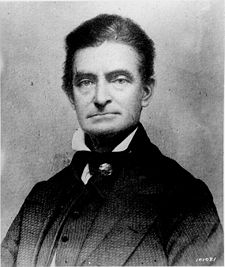 John Brown, the fiery white abolitionist and anti-racist was born on this day, in 1800. Virtually all historians and analysts who have dealt seriously with Brown have accented his militant actions against U.S. slavery. Yet Brown was also a man of ideas–in the long tradition of thinkers who have articulated the great ideals of freedom, justice, equality, and human rights.

In the West one of the first major thinkers in this freedom-loving tradition was the English figure, John Locke, who had an influence on the thought of North America’s influential philosopher of freedom, Thomas Jefferson. Yet both Locke and Jefferson were heavilyg involved in and supportive of the anti-freedom slavery system. While white Europeans like Jean-Jacques Rousseau articulated strong critiques of slavery, before Brown no other white Americans had lent their pens, in a major way, to the effort for the destruction of slavery. Brown presented his ideas in letters, circulars, agreements, and interviews. There he often uses phrases like “struggle for liberty,” “friends of freedom,” and “lovers of liberty and human rights,” placing himself squarely in the tradition of radical theorists of democracy. Brown goes well beyond the ideas of virtually all the white thinkers of his day by extending the ideas of freedom and human rights to enslaved African Americans.

Brown drew in part on the European and American tradition of freedom and equality. Mostly self-taught, he was an avid reader and visited many northern and border state areas and traveled to Europe to study revolutionary movements. In his “Words of Advice, Branch of the United States League of Gileadites” (1851), a statement in support of an underground self-defense organization of African Americans in Massachusetts, he shows his knowledge of struggles of the Greeks against the Turks, the Poles against the Russians, and the Hungarians against Russia. Some years later, while waiting to attack Harper’s Ferry, Brown and his men would discuss philosophy and religion, including the works of Tom Paine. (For details, documents, and photos, see this important book edited and prepared by Jean Libby.)

Brown was not a loner isolated in his thoughts and actions. He was very much in contact with other white and black abolitionists. He did not act in private. He contributed articles and letters to newspapers, wrote constitutions and declarations on freedom and liberty, and gave many articulate speeches on these topics. In the late 1840s Brown even funded the republication of free African American David Walker’s Appeal to the Colored Citizens of the World, as well as the formerly enslaved African American Henry H. Garnet’s “Call to Rebellion.”

These were likely the first two U.S. manifestos systematically and in detail articulating the extreme oppression of slavery and calling for the liberation of enslaved African Americans. Unlike other white abolitionists, Brown had close social interactions with numerous African Americans, inviting them to his home and going to theirs. In his pioneering biography of Brown, the great scholar W. E. B. Du Bois gave him this epitaph: “John Brown worked not simply for Black Men – he worked with them; he was a companion of their daily life, knew their faults and virtues, and felt, as few white Americans have felt, the bitter tragedy of their lot. . . . the man who of all Americans has perhaps come the nearest to touching the real souls of black folk.”

In May 1858, Brown and some black and white allies convened in Chatham, Canada, to adopt a new constitution to govern the revolutionaries fighting against slavery. The preamble to the Constitution, drafted by Brown, read as follows: “Whereas slavery, throughout its entire existence in the United States, is none other than a most barbarous, unprovoked and unjustifiable War of one portion of its citizens upon another portion; the only conditions of which are perpetual imprisonment and hopeless servitude or absolute extermination; in utter disregard and violation of those eternal and self-evident truths set forth in our Declaration of Independence; Therefore, we, citizens of the United States, and the oppressed people . . . do, for the time being, ordain and establish ourselves the following provisional constitution and ordinances, the better to protect our persons, property, lives, and liberties, and to govern our actions.”

Human rights are central to Brown’s thinking. In his writings he often mentions the “natural and inalienable rights” necessary for all Americans. In 1858 he seems to have drafted, possibly with the help of an associate, a “Declaration of Liberty by the Representatives of the Slave Population of the United States of America,” on behalf of enslaved African Americans. He had this Declaration and his Constitution on his person when he was captured at Harper’s Ferry. It was intended to be distributed to the white South. (See here on the Chatham convention)

Brown saw beyond the moral and political strategies of the abolitionists to the need for more aggressive, armed actions against the brutal system of slavery and the governments that upheld it. Thus, he organized a major raid on the arsenal at Harper’s Ferry, West Virginia, with the goal of arming enslaved African Americans to pursue guerilla warfare against the totalitarian slavery system on which this country was founded. Once caught, he continued to assert his ideas on freedom and liberty.

At his November 2, 1859 address to the court that sentenced him to death for the Harper’s Ferry raid, Brown spoke of the golden rule guiding him to speak and work for the “despised poor” and of his commitment to “forfeit my life for the furtherance of the ends of justice” and to mingle his blood with “the blood of millions in this slave country whose rights are disregarded by wicked, cruel, and unjust enactments.” Does this sound like the “wild” and “crazy” man that we are taught about in school?

And where is his big monument in DC? Where is that monument to all those, black and white, who fought bravely against the 246-year-old slavery system?