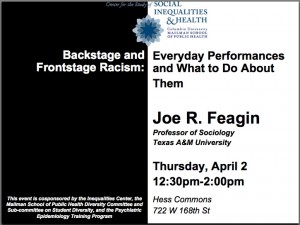 Tomorrow, Thursday, April 2, Joe R. Feagin, Professor, Department of Sociology, Texas A&M University (and co-founder of this blog), will be giving a talk about his research, entitled:

“Backstage and Frontstage Racism: Everyday Performances and What to Do About Them.”

If you’re in the area, I hope to see you there!