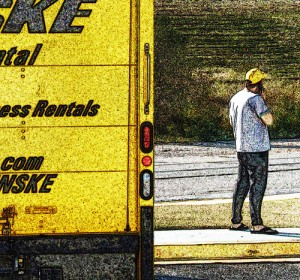 There’s an interview with author Rich Benjamin over at In These Times by David Sirota about Benjamin’s new book, Searching for Whitopia: How the Whiter Half Lives (Hyperion, June).  The premise of the book is that Benjamin, a black man, visits the fastest-growing and whitest areas (e.g., “whitopias”) in the U.S. to explore how white America is “geographically separating itself from the rest of the country,” an awkward, passive voice construction of the problem.

Benjamin says that, as a black man, he finds the whitopias to be superficially welcoming and free of what he calls “interpersonal racism,” but that “structural racism” racism persists.

I have some personal knowledge of white flight and how that contributes to structural racism that, in part, illustrates Benjamin’s point (image from here).

When I was in first grade, my family moved from Houston (where I was born) to Corpus Christi, about four hours south and west along the Gulf Coast.   About the time we moved to Corpus, José Cisneros filed suit against the Corpus Christi Independent School District arguing racial discrimination against his children, and all Mexican-American children in the CCISD.

Cisneros, an auto mechanic and active union member, was appalled by the condition of the public schools compared to the parochial schools where he’d previously sent his children.  Cisneros approached the principal at the public school about repairing the crumbling toilet fixtures and broken windows at the school his children attended.  The principal refused. Cisneros, galvanized by his experience as a union member, turned the principal’s refusal into a cause.  He joined forces with a handful of other parents and filed a lawsuit asserting that the disrepair he witnessed was indicative of a pattern of widespread discrimination against Mexican-American children.  Cisneros won and Cisneros v. Corpus Christi ISD (1970) became the first case to extend the U.S. Supreme Court’s Brown v. the Board of Education of Topeka, Kansas decision (1954) to Mexican Americans.

For the next five years, from 1970 to 1975 while I was in grades 3 through 8 in Corpus Christi public schools, CCISD administrators tried everything they could to get in the way of the court’s decision.  We lived next door to Dr. Dana Williams, the man who was the Superintendent of the CCISD.  Although my father was not politically active or, what today we would call civicly engaged, he did check in regularly with Dr. Williams about the status of the implementation of the desegregation case.  After calmly talking with our next door neighbor in moderate terms about school desegregation, my father would come back across the driveway and, behind closed doors reenact these conversations with my mother, only in the retelling, they would include much less moderate, and more overtly racist, language.

At the beginning of the 1975-1976 school year, and my 8th grade year, the Corpus Christi ISD began to implement the first stage of desegregation, with full implementation planned for the following year.

This was just the motivation my father needed to begin rethinking my education.   Faced with the possibility of having to comply with court-ordered desegregation, he began to see the wisdom of sending me to a boarding school outside the reach of the Corpus Christi ISD.   Then, after strong objections from my mother about sending me away and some preliminary investigation into the actual cost of boarding school, he began to seriously consider a private tutor.  Long before “home schooling” was commonplace, this is essentially what he had in mind.  However, neither of my parents felt inclined or equipped to home school me, and when no other suitable private tutor emerged, my father landed on what he thought was the ideal solution: white flight.

In a rather dramatic version of this phenomenon, my father decided that we would leave the relative diversity of Corpus Christi and return to the bleak whiteness of a suburban, strip-mall, no-zoning, oil and gas exurb of Houston.  My father had several goals in mind with this one move: he could expand his business by being closer to the oil and gas movers-and-shakers in Houston, he would stay true to his commitment to pull me from a school under court-ordered desegregation, and I could go to a school that was more challenging than the CCISD schools.

Thus, in the fall of 1976, one year after school desegregation began in earnest in Corpus Christi, we moved to the all-white suburb of Ponderosa Forest, and I started school at the all-white Spring High School.

My personal narrative of my father’s decision to engage in white flight in the mid-1970s is part of the larger picture of “whitopias” that Benjamin refers to in his book.  The kind of decision that my father made about relocating our family to an apartheid-like, privileged suburb of Houston is one that, some thirty years later, continues to play itself out across the U.S., in the north, east, south and west.  As Benjamin notes in the interview with Sirota:

Interpersonal racism is declining. I met such lovely people across whitopia. In our tolerant, relentlessly friendly society, people rarely degrade others because of skin color. The majority of Americans accept politicians, co-workers and friendships from different races.

But structural racism—or, the policies and behaviors of institutions that perpetuate racial segregation and inequality—is not on the decline. America’s schools and neighborhoods are as racially segregated today as they were in 1970. That’s a big problem. And during my research, I discovered that my native New York City has the same demonstrable level of black-white segregation that it did in 1910. Nothing has changed on that front in a century.

While I agree that public expressions of overt racism are declining, I think that Benjamin is naïve to minimize the individual racism of whites (e.g., Picca and Feagin, Two-Faced Racism, 2007).  He is right to emphasize the ongoing impact of structural racism.  The fact is that court-ordered school desegregation was intended to dismantle structural and institutional racism in education, yet white people – like my father – continue to resist such dismantling of the American system of apartheid by voting with their moving vans,  relocating to all-white suburbs and sending their children to all-white schools.