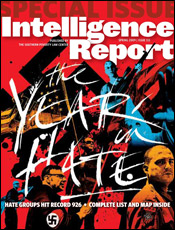 e groups in America.  This year the SPLC identified a record 926 active hate groups, a 4% increase from 2007, and a 54% increase in documented groups since 2000. Perhaps unsurprising though is that the failing economy and the election of President Obama have accounted for the uptick in recruitment and membership:

“Barack Obama’s election has inflamed racist extremists who see it as another sign that their country is under siege by non-whites,” said Mark Potok, editor of the Intelligence Report, a quarterly investigative journal that monitors the radical right. “The idea of a black man in the White House, combined with the deepening economic crisis and continuing high levels of Latino immigration, has given white supremacists a real platform on which to recruit.”

This CNN report by Stephanie Chen about the increase includes an interview with Don Black, the founder of one of the largest online “white nationalist” sites in America, Stormfront:

On the day after Obama’s historic election, more than 2,000 people joined his Web site, a remarkable increase from the approximately 80 new members a day he was getting, Black said. His Web site, which was started in 1995, is one of the oldest and largest hate group sites. The site received so many hits that it crashed after election results were announced. The site boasts 110,000 registered members today, Black said.

Obama serves as a “visual aid” that is helping respark a sense of purpose in current supporters and lure new members, said neo-Nazi David Duke, the former Klan leader who was elected to the Louisiana House of Representatives in the 1980s. Duke said he fears “the white European-American” heritage will soon be destroyed. He added that his Web site sees around 40,000 unique visitors a day, up from 15,000 a day before Obama won the election.

The complete SPLC Intelligence Report can be found here. SPLC also provides an interactive map with state-by-state numbers of groups.