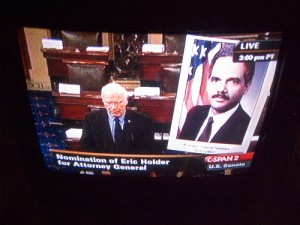 In a speech given in honor of Black History Month at the Justice Department yesterday, Attorney General Eric Holder said that we are a “nation of cowards” when it comes to addressing “racial matters”  (h/t HarryWaisbren via Twitter).  As readers here will no doubt recall, Holder is the first African American Attorney General (image of from here).

Here’s the longer quote from Holder’s speech, courtesy of Amanda Terkel at ThinkProgress:

Though this nation has proudly thought of itself as an ethnic melting pot, in things racial, we have always been, and we, I believe, continue to be, in too many ways, a nation of cowards. Though race related issues continue to occupy a significant portion of our political discussion, and though there remain many unresolved racial issue in this nation, we, average Americans, simply do not talk enough with each other about things racial. […]

I tend to agree with Holder and find it both refreshing and somewhat startling to hear someone in power speak the truth.   Not surprisingly, neo-con Jonah Goldberg has his panties in a twist about Holder’s remarks, but then, I wouldn’t expect anything else from the guy who wrote Liberal Fascism.

I’d add one thing to Holder’s assessment.   In my view, it’s whites who are the cowards when it comes to talking about racial matters.   As I mentioned in a post a few weeks back, most of the discussion about “race” in schools gets stashed in classes called “African American History.”    For the most part, whites don’t sign up to take those classes because they don’t see them as relevant for their own lives or their understanding of this country.   And, that’s just the 25% or so of the U.S. population that makes it to college.   There’s still no K-12 curriculum that addresses the history of racism in this country; the Amistad Commission set up to address this educational void here in New York State is remains stalled after four years. The cumulative effect of these sorts of choices, this national cowardice – refusing to engage in conversation about racism, no educational initiative to teach school children about racism, and college-attending whites’ lack of interest in African American history – is willful ignorance.   Based on my long history of knowing white people personally, that by remaining ignorant about racism, many whites are hoping that that absolves them of any culpability for doing anything about it.    Like I said, that’s just a guess, I don’t have any research to back that up.

I say it’s way past time for us, as a nation, to have a little courage and start having these conversations.    What do you say?