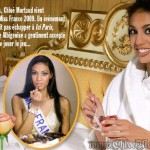 an interesting article on theRoot.com about Chloe Mortaud, the new Miss France, who self-defines as Black, something unusual in France for people of biracial heritage (her father is white French, her mother is African American). I think “beauty queens” and “beauty pageants” are sexist phenomena whose time should be long gone, but Marsh accents some interesting points about the global impact of Obama’s election and some changes in symbolism across the globe that are well worth thinking about (photo credit).

The French media have started calling Ms. Mortaud, interestingly, “Miss Obama,” which also suggests the global impact of the Obama election. Marsh makes the following contentions about “blackness is in vogue”:

Blackness is fast moving to the center of the world’s psyche. For proof, look no further than last month’s crowning of a binational and biracial Miss France 2009. Chloe Mortaud’s selection as the face of French beauty and elegance has so few precedents that the French media have named her, perhaps cheaply, “Miss Obama.”

The first sentence is a huge exaggeration. (More accurate would be that there is a negative view of blackness at the center of too much of the “world’s psyche.”) Indeed, not everybody in France is happy with a black face representing classical “French beauty” (traditionally pasty white?):

Around the Web, some French commentators have complained that Mortaud is not pretty.

But Marsh sees the debate on her race and her calling herself Black as healthy and an advance for France:

The very discussion of Mortaud’s worthiness represents an advance in the way the French deal with race. The enduring myth of a colorblind France has obscured the relative invisibility of non-white French people in France’s public life. The French government does not keep statistics on race. The official position is that there are no differences among the races—therefore, there is no reason to keep an account of it. That means disparities among racial groups cannot be quantified. However, a trip to an impoverished banlieue (suburb) of Paris or Marseille, where “race riots” in neighborhoods inhabited by large numbers of African and Arab immigrants have made world headlines, shows a qualitative difference.

It is interesting that he means an advance for WHITE France in thinking Mortaud worthy, a point he seems to miss here. Note too that the white oppressors and discriminators substantially responsible for the impoverished suburbs remain implicit here, and are not explicitly mentioned. It is interesting how the sensitivities of whites gets privileged even it what is otherwise a good critical analysis.

He then argues that Obama has helped to make Blacks in France feel a certain new unity, and shared experience:

Thanks in part to the Obama effect, French blacks who have traditionally been divided by designations like Caribbean, African or mixed ancestry, have started to make claims on transnational “blackness,” a feeling of a mutual experience if not shared origin.

Marsh does seem to be right about the great international impact of Obama’s election, an impact very much worth watching. In Brazil, the largest African-origin population outside of Africa, there has been much public and private celebration. One Brazilian official, Edson Santos, the black minister of racial equality, accented the impact on many youth there:

I think it is important for young black Brazilians to know how the civil rights movement progressed in the U.S. and how it produced not just Obama, but blacks at the highest levels of American businesses. It is important that they have contact with this reality.

A young Brazilian agreed with him about the significance and possible impact of this new U.S. reality: “Obama has arrived and taken us to the next level, We black Brazilians need him as much as the Americans do.” The main reason for this is that black Brazilians, who make up at least half the Brazilian population, suffer widespread racial discrimination; they make up only 3 percent of college graduates and only eight percent of the 28 top government ministers. And the black Brazilian civil rights movement has only recently come of age. A black organizer who works with Brazil’s poor agreed that Obama symbolized the hopes of all people of African descent:

Obama represents what every black person in the world has been hoping for: that the fight of the dream for racial equality in North America can spread to the entire world.”