There are some interesting dates to note today, given that our first black president has a Kenyan father:

December 12, 1963 – The African colony of Kenya gains its independence from the colonial power, United Kingdom.

Is it odd that the mass media has shown so little interest in the Kenyan background of our president-elect? Is Africa still the “dark continent” (the old racist, colonialist term), for the mainstream media? Will this change with our new president coming into office?

And, by the way, Barack Obama will be officially elected as president only as of next Monday when our highly undemocratic institution, the electoral college, which was bestowed on us mostly by white slaveholders in 1787, meets to vote.

This week Winter Rabbit at Native American Netroots has a good overview of several genocidal actions by the US army and white militias in a post, “The Wounded Knee Massacre: 118th Anniversary.”

The massacre allegedly began after an Indian, who was being disarmed, 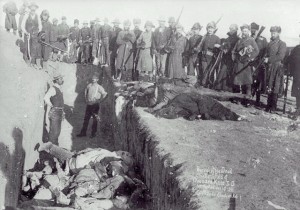 shot a U.S. officer. … Hotchkiss guns shredded the camp on Wounded Knee Creek, killing, according to one estimate, 300 of 350 men, women, and children

(photos: Thomasson, William B)
A wikipedia article adds these details:

The Wounded Knee Massacre was the last major armed conflict between the Oglala Lakota and the United States. It was described as a massacre by General Nelson A. Miles in a letter to the Commissioner of Indian Affairs. On December 29, 1890, 500 troops of the U.S. 7th Cavalry, supported by four Hotchkiss guns (a lightweight artillery piece designed for travel with cavalry and used as a replacement for the aging twelve-pound mountain howitzer), surrounded an encampment of Miniconjou Sioux (Lakota) and Hunkpapa Sioux (Lakota). The Army had orders to escort the Sioux to the railroad for transport to Omaha, Nebraska. One day prior, the Sioux had given up their protracted flight from the troops and willingly agreed to turn themselves in at the Pine Ridge Agency in South Dakota…. They were met by the 7th Cavalry, who intended to use a display of force coupled with firm negotiations to gain compliance from them. The commander of the 7th had been ordered to disarm the Lakota before proceeding. During the process of disarmament, a deaf tribesman named Black Coyote refused the order to give up his rifle because he didn’t understand. . . . By the time it was over, more than 200 men, women and children of the Lakota Sioux lay dead.

(For more photos and details see here)
Unlike in Germany, the U.S. genocide against indigenous Americans has yet to be recognized and faced. No appropriate reparations or real national apology yet. Don’t we still live a fundamentally immoral existence as a nation?

(Note: Native American Netroots is an important site to know about: It is

a forum for the discussion of political, social and economic issues affecting the indigenous peoples of the United States, including their lack of political representation, economic deprivation, health care issues, and the on-going struggle for preservation of identity and cultural history.