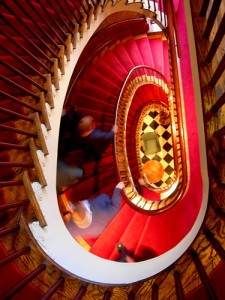 There is new evidence that African American, Asian and Native American junior faculty are less satisfied than white junior faculty with the climate, culture and collegiality of their institutions (image of Harvard Faculty Club Staircase via Flickr/CreativeCommons).

These findings are based on a new report based by COACHE that included a sample of 8,500 pre-tenure faculty members at 96 four-year colleges and universities — public and private, liberal arts oriented colleges and research universities.  According to Inside Higher Ed, this is the first time that COACHE has released data about differences among minority faculty from different racial/ethnic backgrounds, and some of these results are interesting:

Of the 10 climate measures in the survey, Asians were less satisfied on 6; Native Americans on 5; and African Americans on 4, all by statistically significant margins.

The piece at Inside Higher Ed does, eventually, address racism.   About half way into the piece, here’s the relevant bit:

African American faculty members are also less likely than their white counterparts to believe that tenure decisions are made primarily on job performance. Cathy Trower, research director of COACHE, said in a statement that these gaps suggest that ”African American faculty may be experiencing some lingering aspects of racism — real or perceived — as evidenced by their concern with fair treatment and lower satisfaction with the amount of interaction and collaboration with others.”

This is an old familiar strategy embedded in the white racial frame. Here, the research director adopts the white racial frame as she minimizes the experience of racism with her “real or perceived” comment.  As I mentioned a couple of days ago, racism on campuses is a persistent problem that affects students.  The persistence of racism on campuses, not surprisingly, also affects faculty.  While I think it’s important that those in power at predominantly white institutions talk about diversity and minority recruitment of faculty and students to change the complexion of those institutions, I think it’s equally important to simultaneously engage in conversations about the persistent racism in those institutions and what the cost might be for faculty and students of color.