According to the CNN and ABC exit polls, white Americans overwhelmingly wanted John McCain to be the next US president. The white vote was lopsided for McCain at 55-43 percent. If the 2008 electorate had the same demographic character as any before about 1980 (that is being nearly 90 percent white), Senator John McCain would currently be the president-elect.

But as we know that did not happen, because the electorate this time was only 74 percent white, and those voters who were not white voted very heavily for Senator Obama. ABC News’ exit 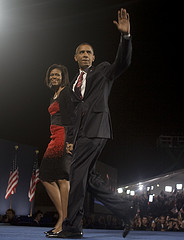 polls are reported this way, in terms of percentages for Obama/McCain:

Some high-density Asian American counties on the West Coast voted at even higher rates of 70 percent, and Shari’s (H/T) check of local sources on Native Americans reveals that their vote was lopsided too:

The Native American numbers I got from looking at the election returns in counties that have reservations in North Dakota, South Dakota, Nebraska, Montana, Nevada, New Mexico and Colorado [show] the range of the Obama spread was from 62 to 87 percent.

The role of voters of color in electing Senator Obama the next president is in my view one of the most important stories of this historic election, yet I have not seen serious mainstream media analysis of this and of what it means about the rise of a multiracial democracy and the decline of white political dominance in the United States. Why is this story not getting major attention? Perhaps it is because the white-controlled, intensively white-framed mass media are all caught up in declaring this to be a “post-racial” or “post-racist America.” Nothing could be farther from the truth.

Another obvious fact about this election, which has also gotten little play in the media, is the continuing reality of the Republican Party being mainly the “white party” of the United States. This party gets very few African American voters and does not get even 40 percent of any other group of color.

I have seen a little media commentary on whether the Republican “southern strategy” is still viable, but no discussion of the fact that such a term is only another racism-denying euphemism for what is in fact the “white southern strategy” or “white racist strategy” of the Republican Party. (It is correctly called these latter terms because some 20-40 percent of “southerners” are not white, depending on the area of the South.) Since the 1960s this Republican strategy has been a “white southern” strategy but almost no analysts in or outside the mainstream media are willing to call it by its correct name–just as they are unwilling to call the so-called “Bradley effect” by its correct name (either the “white racism effect” or the “whites-lying effect”). The Republican Party currently has no Black members in Congress or in other high elected offices, and none in high party leadership. It has only a very few (token) appointed officials in high office and has indeed shown no significant leadership on or commitment to civil rights enforcement issues since the 1960s. (For more, see here. ) It is indeed still the “white party,” as this election dramatically reveals and as even Howard Dean let slip in August this year.