as an op-ed piece in The Boston Globe in which she suggests that “racial amnesia may be the cure” for getting Obama elected (image source).  Her essay includes this paragraph:

Regardless of one’s political leaning, most would acknowledge that the country is aware of its racial and ethnic diversity, and that for most Americans the stark contrast between the “black experience” and the “white experience” no longer exists. Systemic, state-enforced discrimination has disappeared and the prominence of civil rights law enforcement is greatly diminished.

And then after acknowledging some lingering inequality, she closes with this:

Figuring out the significance of race will be a challenge, but relying on racial memories based on a divided reality is not a good option.

Hill locates racism in the past, as a phenomenon residing primarily in the “memories” of a divided reality.   No doubt this is a comforting notion to many.  Unfortunately, Hill’s call for willful amnesia contributes to the problem rather than helps alleviate it.   As I posted a couple of days ago, we live in a culture that discourages critical thinking, particularly around issues of race and racism, and this makes understanding the world more difficult rather than easier.

Racism does not exist exclusively in the realm of the past.  Just recently, a life-sized effigy of Obama was found hanging from a tree with a noose around its neck at the University of Kentucky, and this is just the latest in a series of overtly racist incidents, including a foiled assassination plot by neo-nazis. (Updated @10:44am to add: And now this racist email from a GOP party volunteer that even FoxNews is reporting.)   The persistence of this sort of overt racism alongside the trend toward support for Obama among many whites (including David Duke, as Joe noted) suggests that racism continues to be a complicated issue in the U.S.   Such a reality calls for engaging in more complex and nuanced thinking about race, not amnesia.    Hill is a smart woman and it’s disappointing to see her advocate such a naïve and facile position on race.    Charles Ogletree, law professor at Harvard, argues that “racial amnesia” and “racial fatigue” are the real problems.  We have forgotten how significant race is and we think we don’t have to talk about it anymore, Ogletree said at a recent gathering about racial disparties in the judicial system.  The school-to-prison pipeline is still about race and about gender.  At Rikers Island (where I’ve done some research), the population is 95% black and brown.  Blacks are 10 times more likely to be arrested than whites, and young men are 17 times more likely to be arrested than young women. In Connecticut, for example, the state has sent hundreds of adolescent girls (opens .pdf) — most of them black and brown —  to the state’s maximum security women’s prison (h/t Rick Green).

Given Hill’s background as a strong example, heroine even, for women who have endured sexual harassment in the work place, it’s doubly disappointing to read her recommendation advocating for racial amnesia rather than pointing it out as a problem.    It seems unlikely that she would recommend a similar strategy for dealing with gender.    Instead of “Speaking Truth to Power” (the name of her book about her testimony in the Clarence Thoma 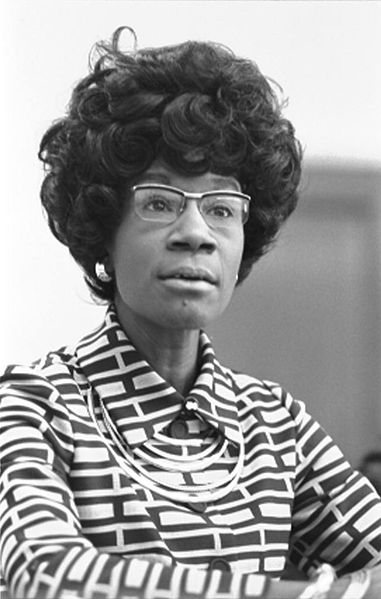 s hearings) about racism, Hill adopts the white racial frame by embracing intentional forgetfulness.  If Hill’s goal was to support the Obama campaign (crossing over from her life long allegiance to the GOP), she might have drawn on the example of Shirley Chisholm (image source).

Talk about amnesia.  Chisholm, a representative in Congress from Queens, NY ran for U.S. President in 1972.   Her name has rarely, if ever, been mentioned in the current election cycle.  Chisholm talked openly about facing racism and sexism, and courageously spoke truth to power at a time when it was incredibly unpopular to do so.   Chisholm’s bid for high office made possible both presidential campaigns of Hilary Clinton and Barack Obama.     Do yourself a favor, watch “Chisholm ’72: Unbought & Unbossed,” this election season and rid yourself of a little amnesia.