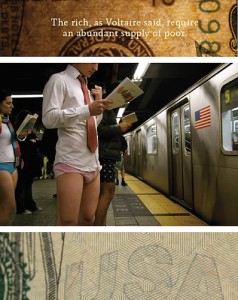 It seems that each day brings worse and worse news about the economy, but this crisis of capitalism may just be an opportunity we need for solving a number of ongoing social problems, including racial inequality (image source).     In a recent post for the Huffington Post, former Senator Gary Hart suggests that the current financial disaster along with “a weakened Wall Street and a chastened conservative community” provides a unique opportunity for the next president to transform the U.S. economy and a “sober re-regulation of markets.”  Hart is insightful here when he writes:

But recreation of another Rooseveltian period of 1932 to 1940, with a new set of rules for intricate financial institutions, is not enough. We must transform our economy from one of consumption to one of production, invest much more heavily in new technologies, research, and invention, and start the process of creating a post-carbon economy. The current wreckage must not simply be put back together to recreate the old economy. It must be pushed out of the way to make space for a new, 21st century economy.

The same may be said for foreign policy. Merely returning to the pre-Bush status quo will not work because the new century features a host of new realities: proliferation of weapons of mass destruction; the rise of stateless nations; the threat of pandemics; failed and failing states; mass south-north migrations; climate change; globalized economics; and the list continues. An Obama administration will have responsibility for repairing damaged traditional relations. But it will also have the opportunity to create a new round of international institution-building that includes international financial regulation and cooperation, international administration of a post-Kyoto treaty, reduction in nuclear weapons, integration of public health services, and so on. Our new foreign policy should be patterned on the immensely creative 1945 to 1948 Truman era.

And when troops and equipment are returned from Iraq and Afghanistan, our military should not merely be “re-set”, the Washington code word for rebuilding the Cold War military. Our defenses in the new century must acknowledge the transformation of war and the changing nature of conflict which will require new military structures, command and control systems, and even weapons themselves.

I heartily agree with this assessment and am disappointed that there’s not more of this kind of rhetoric coming from the Obama campaign (but, I get the political reality of just-getting-elected).   I’d also suggest that Hart doesn’t go far enough.   While the national and international leaders are trying to figure out how to clean up the detritus from the party of greed and excess that the capitalists threw for themselves, this is a moment of great possibility for thinking in new ways about old problems.    Some months ago, I wrote here about racism, suburban sprawl and what it might be like to imagine a green future.   The disaster in the financial markets is, in many ways, deeply tied to the idea of suburban sprawl and the “American lifestyle” which is doomed.  And, now that ultimately unworkable style of living is, to hear some tell it, unraveling.    I don’t disagree.   And, added to that noxious mix of an economic boom squandered is one of the oldest problems in the U.S.:  racial inequality interwoven with economic disparities.  The combination of these two systems of oppression create all sorts of other havoc in people’s lives.

Yet, even as all the forecasts for the U.S. economy look dour, I’m feeling uncharacteristically… well, not officially optimistic…. but at least mildly hopeful.  It seems to me that there’s kind of a perfect storm of bad, even cataclysmic, events happening at once that just make real change possible.

At their best, green-collar jobs offer living wages and upward mobility — in growth industries. And most of these jobs simply cannot be outsourced to other countries. The reason is simple: the solar panels and wind farms must be constructed here in the United States, not overseas. And the millions and millions of buildings that need to be retrofitted to save more energy cannot be shipped over to China. They all must be weatherized where they stand — right here in the United States.

The key is to make sure that those people who most need the jobs — urban youth, returning veterans, struggling farmers, displaced workers from our manufacturing sectors — can get all the training they need to fill those posts.

The allocation for this ($120 million) now seems like a tiny amount now (compared to the $700 billion devoted to the economic bailout of Wall Street), but this kind of innovative thinking may just be one of the pathways out of the current mess.  And, if we could ensure that these kinds of programs actually helped those most in need of jobs, it might go a long way to ameliorating economic and racial inequality.    Unfortunately, neither of the presidential candidates is suggesting anything quite this innovative.   The fact is the people will have to lead on this, and that is long overdue.