In mid-July Jessie did a post on the AMA apology, but I would like to add a bit more on this issue, especially about how racism works in US medicine. One good result from anti-racism efforts in the last decade may be that we are getting 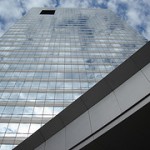 more serious apologies from white organizations about slavery or Jim Crow segregation. Harriet Washington reports in a late July 2008 New York Times article on one of the most institutionally racist sectors of our society, U.S. medical care institutions. Highly (photo of AMA building: Steve and Sara) and blatantly segregated until the late 1960s, she notes, the American Medical Association has recently apologized the National Medical Association, the country’s leading black medical association:

An apology to the nation’s black physicians, citing a century of ”past wrongs.”

From the beginning, U.S. medicine’s institutions have been racially and gender segregated, but Jim Crow and gender segregation increased in the early 1900s with the implementation of private and government “reforms” designed to get rid medical practitioners who were not officially licensed—which usually meant they were not from the more elite (almost all white) medical schools and often practiced various kinds of folk medicine (including midwives). These reforms did raise U.S. medical standards, at least for allopathic mainstream medicine, yet also effectively excluded many white women and practitioners of color from their traditional medical practices. And Jim Crow segregation became very central to this newly reformed medical system:

. . . black patients and doctors were often relegated to subterranean ”colored” or charity wards or banned from hospitals altogether; they had responded with their own hospitals and medical schools, at least seven of which existed in 1909. By 1938, the situation had grown so dire that Dr. Louis T. Wright of Harlem Hospital declared, ”The A.M.A. has demonstrated as much interest in the health of the Negro as Hitler has in the health of the Jew.”

Washington notes that the American Medical Association continued to be a problem until the end of the civil rights movement era:

The Civil Rights Act of 1964 passed without active support from the A.M.A. Title VI of the act closed the Hill-Burton loophole: segregation within hospitals became illegal….But for African-American and other antisegregationist physicians, there remained a final bastion of racial exclusion to conquer: the A.M.A.

Still, today, the percentage of U.S. physicians who are African American (2.2 percent) is still smaller than it was in 1910 (2.5 percent). And our medical care system is riddled with numerous kinds of institutional racism, as recent research reports (see various chapters here and chapter 7 here) frequently make clear. There are some very good scholarly bloggers like U. Dayton’s Prof. Vernellia Randall (see her great website here) who have given even more details on how such institutionalized racism works and how it is a violation of international human rights and anti-discrimination laws.

Note: I have given more than 100 invited lectures over the years on my research on racism at many schools and colleges within our top universities and liberal arts colleges across the country, and I have only had one invited lecture cancelled–ever. This was after two faculty members saw at the xerox machine the handout (it had quotes from whites making various racist comments, from my research interviews) that I was going to talk about. This was a Florida medical school, which had invited me and other researchers to talk about racial matters because they had had racist graffitti in their medical school classrooms. They reportedly still have problems today.