USA Today reports on a summer Gallup/USA Today poll on “race relations,” the conventional media term that dances around without naming the actual reality of systemic racism. They surveyed 702 whites, 608 blacks, and 502 Hispanics. The reporters make these opening claims:

The survey paints a mixed picture of race relations. The racial divide over whether African Americans are treated fairly hasn’t abated, and blacks and whites are deeply divided on how much of a role bias plays in problems faced by the African American community. On the other hand, a record 58% of Americans say race relations “eventually will be worked out,” while 38% say they will “always be a problem.”

The reporters use this weak opening that tries to put a pretty face on racism. After doing the usual balancing of “bad” racial news with “good” racial news–that is after framing the story from a version of the white racial frame that wants to play down racism–the reporter then notes some troubling and revealing data: 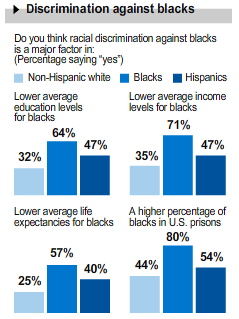 Two-thirds of non-Hispanic whites say they are satisfied with the way blacks are treated in the USA; two-thirds of blacks say they are dissatisfied. Most blacks identify racial discrimination as a major factor in a list of problems the African American community faces, including shorter life expectancies than whites and a higher likelihood of going to prison. Most whites call racism a minor factor or not a factor in those situations.

The reporters then, again, try to put a pretty face on U.S. racism:

The gap between blacks and whites in assessing race relations seems to be narrowing. Last year, 75% of whites and 55% of blacks said black-white relations were good, a 20-point gap. This year, that difference of opinion drops to 9 points. . . . Eight in 10 whites and seven in 10 blacks say civil rights for blacks have improved in the past decade.

Clearly, survey researchers often have a limited understanding of racial matters in this country, as is revealed in such superficial questioning. Why not ask more sophisticated and probing questions that get at the major differences in the way that black and white Americans see these issues of “race relations” (systemic racism) and civil rights progress? Why not do some interviewing on these matters? I am pretty sure they would find major differences if they did in-depth interviewing or focus groups.

And how about some more insightful analysis? For example, an African American can of course see improvement if the recent racial past was one of the lynchings and other extreme brutality and oppression of the legal segregation era that lasted into the 1970s—indeed, which ended a rather short time ago when many of us were already adults. It can still, of course, be a very bad situation today as other answers indicate.

This tepid “racial divide” language suggests just how white-framed, and thus out of touch with reality, the maintain mass media are. The so-called “racial divide” is the result of systemic racism created and perpetrated by whites — a system that has now operated over some 400 years in this country, yet it is very rare for this systemic racism, its racial hierarchy, or it rationalizing white racial frame to be critically analyzed in our whitewashed media. Is it a type of “collective psychosis” when large groups of people, like many whites inside and outside of the media, are way out of touch with our still highly racialized reality?

(Note: There is also no significant analysis of the Latino responses in this article. Also, the racist comments posted on the USA Today website by readers after their article contradict the “good race relations” approach in the article.)