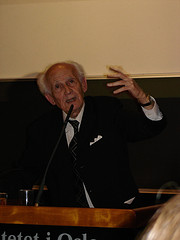 I have been reading the excellent book by Zygmunt Bauman, Modernity and the Holocaust, and he makes very good points relevant to change action today. A common barrier to social change in all societies is the reluctance of most people, including those who know change is ethical and necessary, to take action. Writing insightfully about (photo: cicilief) lessons he takes from the Holocaust, Bauman has sagely noted that “Evil can do its dirty work, hoping that most people most of the time will refrain from doing rash, reckless things – and resisting evil is rash and reckless. Evil needs neither enthusiastic followers nor an applauding audience – the instinct of self-preservation will do, encouraged by the comforting thought that it is not my turn, thank God: by lying low, I can still escape.” One of the serious obstacles to racial change in the U.S. case is the many good people who know the white racial frame and its racial hierarchy need to be changed but who remain at a distance as bystanders and do not object to even the 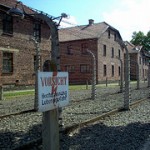 Still, Bauman underscores the point that even such great evils need not have happened if some people will just act. While most people in Nazi Germany did put their self-preservation above their their high moral duty, this was, and is, not inevitable: “Evil is not all powerful. It can be resisted. The testimony of the few who did resist shatters the authority of the logic of self-preservation. It shows it for what it is in the end – a choice. One wonders how many people must defy that logic for evil to be incapacitated. Is there a magic threshold of defiance beyond which the technology of evil grinds to a halt?”

How many, indeed? What do you think?

I think we need to encourage many more Americans to defy the logic of self-preservation and thus to disrupt racist performances that reinforce the white racist frame. We need to teach whites and others how to call out backstage racist ideas and performances, which habitually generate discrimination in frontstage settings. Even modest interventions are a good start.

Whites especially, and others, can counter racist performances by using humor (“Did you learn that joke from the Klan?”), feigning ignorance (“Can you please explain that racial comment?”), and constantly reframing situations of racial hostility and discrimination by accenting ideas of justice, fair play, and personal responsibility.

What are your experiences with such antiracist interventions with friends, relatives, strangers?

Hello all, just wanted to announce my newest book project, for which I would love to have any input that racismreview readers would like to share. City Lights has agreed to publish a long-form essay (probably about 125 pages or so), in Spring 2009, entitled “Between Barack and a Hard Place: Racism and Whiteness in the Age of Obama.” As you can see from the title, it will address the impact of the Obama candidacy on our national understanding (or misunderstanding) of racism and whiteness as related phenomena. It will likely be the first treatment of the subject post-election to be released, and so I am trying to hard to make sure I cover all the bases. As such, please feel free to send me things you think are important to consider, angles to explore, points that you feel MUST be made in such a book. Of course, much of the material on racismreview will be referenced, but other input is greatly appreciated. I am well into the writing of it by now, and have a very quick deadline (September 1), but any input you all might have is appreciated. You can reach me at timjwise@mac.com. Thanks.