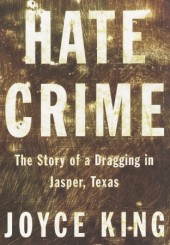 Ten years after the racist murder of James Byrd by three white men in Jasper, Texas. Today on my local NPR affiliate, WNYC, they aired an interesting interview (available online after 7pmEST) by Michele Norris of two ministers from Jasper who were crucial in creating an environment of racial healing following the murder. Norris talks to Father Ronald Foshage of St. Michael’s Catholic Church and Pastor Kenneth Lyons of Greater New Bethel Baptist Church about how they worked to avert further racism in their community immediately following the murder and in the years that followed. The two ministers reflect on the healing process that took place between blacks and whites in the town and how important the show of a larger number of whites showing up at James Byrd’s funeral was to healing the wounds in that town. They also give praise to the Byrd family for their forgiveness from the very beginning. And, they mention how many whites in Jasper did not want to mark the tenth anniversary of this horrible crime, yet leaders like Father Foshage and Pastor Lyons led the way emphasizing the issue of remembrance for addressing racism. For a good account of this event, see Joyce King’s Hate Crime (Random House, 2002).

Addendum
:Here are some details on the lynching of James Byrd, Jr., from my Racist America book (references can be found there):

In June 1998, a black man, James Byrd, Jr., was walking down a Jasper, Texas, road. Three white men, with tattoos suggesting ties to white-supremacist groups, beat him savagely, tied him to a pickup, and dragged him along a road until his head and arms were severed. One man reportedly said to the others, “We’re starting The Turner Diaries early,” referring to violence by white supremacists in that racist novel. The girlfriend of one of the men said that, while she knew he was a member of the Aryan Brotherhood and did not like blacks, she did not see him as a racist. This lynching was not just an isolated incident. Indeed, it brought to national attention the larger social context of antiblack violence. After the lynching a Ku Klux Klan group held a rally for the white supremacist cause in Jasper. In addition, this area of Texas is known to be white supremacist territory. A white militia group has a training facility in the county, and a few Christian Identity churches are in nearby towns. The Jasper lynching triggered copycat crimes in at least two other cities, Belleville, Illinois, and Slidell, Louisiana, where several white men in cars reportedly attacked and injured black men.

The Jasper lynching and similar violent personal attacks on black men and women, as well as such attacks on other Americans of color, are most often carried out by working-class whites. Yet the responses of some elite and middle-class whites to the Jasper lynching revealed a certain indifference to these crimes. For example, the first New York Times article on the Jasper lynching was buried on page 16; the bloody lynching did not rise to the level of a front page story. In addition, one New York Times article spent considerable space on the problems of the black victim himself, describing his alcoholism and unemployment—as if such things mattered in assessing the meaning of his Klan-type lynching.

The folks at “Faux News” are at it again in this current display of gendered racism that is beyond unacceptable.  In a story about Michelle Obama, they referred to her as “Obama’s Baby Mama.”   This is real racism and not just “poor judgment” as one VP at Fox said in a statement.   Ironically enough, this is the same network that gave us Tony Snow, who rather famously (or, infamously) said that “racism doesn’t exist anymore.”  Well, it certainly seems to at Fox News.   Pam Spaulding calls this one like it is when she writes:

It’s high time that Fox News just stop with the pussyfooting around with these  games and run the more direct “nigger” on any Chyron running over video of the Obamas.

Not only is the reference racist, of course, sexism is deeply embedded in this statement as well.  As Echidne explains, the term “baby mama” is a sexist slur and this latest move by Fox News is:

The anticipated mix of racism and sexism. The hint that Michelle and Barack are not legally married, that theirs is not a “real” family.

Really, someone should pull Fox News’ FCC license.  This is unconscionable.