This week I came across an article in Playboy (June 2008) suspiciously and nonsensically named, “The Black KKK: Thug Life is Killing Black America. It’s Time to Do Something About It” by Jason Whitlock. First the title grabbed my attention and caused my blood pressure to rise, for my scholarly intuition alerted me that the blame of Black violence would be placed on Blacks. Mr. Whitlock noted that the title was crafted not by him, but by the “second in command” under Hugh Hefner, Chris Napolitano, editorial director of Playboy magazine. Whitlock refers to Napolitano as a person “committed to stirring a racial controversy” with use of the title and his efforts in this regard are “calculated and deliberate.”

Whitlock missed pointing out that the title attempted to tie a white hate group that has historically (and presently) attempted to psychologically and physically terrorize people of color for centuries within the U.S. for the purposes of social control to an epidemic of violence between a segment of poor Black people. It is easier to compare oranges to apples than the KKK to Black violence.

The article in essence makes “a desperate plea for America to change course from its lock-’em-up-and-throw-away-the-key criminal justice system. The approach doesn’t create safety. It breeds corruption and gang culture. And it is currently crippling state and federal budgets.” This is a point I and others (here and here) agree with.

The article does a good job at presenting information on the uniquely politically strong prison-guard union in California and their effects on policies and procedures around Black and Brown incarceration. This in fact is the same system that leads the country in the mentality of the “lock-’em-up-and-throw-away-the-key criminal justice system” that has swept the country.

Whitlock fails in presenting an encompassing analysis of the issue of Black and Brown people being incarcerated. First, he fails to discuss or acknowledge the effects poverty has on the occurrences of crime. Secondly, he goes no where near presenting to the reader the effects of racism, oppression, and social control within the judicial system. Seeing him on varies television shows, it is apparent that Whitlock is grounded in a color-blind functionalist paradigm, therefore it does not amaze me that these variables were left out of the discussion. Now, I know that Mr. Whitlock’s forte involves writing within the sphere of sports. But he needs to stick to his arena of expertise of field goals and touch downs for writing on social issues without a critical lens within an arena such as Playboy can do more harm than good. What did he think would happen when publishing within a magazine (see also this) that has historically courted a particular population–well-to-do White males. 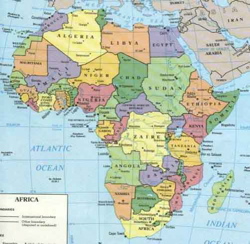 In Rwanda, the genocide that took place because of enmity between Hutus and Tutsis has become our contemporary example of tribalism gone wild and uncontrolled. Similar conflicts in Kenya between the Luos and Kikuyus, in Liberia between the Americo-Liberians and the native Africans, in Nigeria between Northern Hausa/Fulani and the Southern Ibos and/or Yorubas have been equally violent and tragic (map image from here).

What we are yet to uncover is a mapping of how ethnic differences become prominent; in the narrative reports from the recent conflicts in Kenya, there were incidents of long-time neighbors turning against each other; we find the same narratives from Rwanda and Liberia where neighbors and friends become enemies overnight. How do ethnic differences turn into tragic violence between groups? Are some African countries better able to prevent ethnic differences from turning into violent communal conflicts? When and how do ethnic differences trump peaceful and fruitful social interactions over time between two groups? How remarkable is it that the 11 countries listed above constitute a third of all the countries in that region? These are questions that speak to the extent of social distance among ethnic groups.

Most importantly, does this tribalism or ethnocentrism in sub-Saharan Africa bear any resemblance to white racism in America and Europe? I think so, when we consider the outcomes of it – ethnic or racial patronage, economic rewards that accrue to citizens based on tribal or ethnic and racial affiliations, and the violence that one race/ethnic group/tribe visits on the other.

In Africa, after independence, the emergent nation-states shunned tribal-based or ethnic-based political parties – the so-called ‘tribal unions’ were not consonant with the ideals of the new nationalism based on a progressive ideal of a community of diverse ethnic groups. Even there, some of the political parties evolved along tribal or ethnic lines. The strain between the traditional structures (chiefs, kings and their privileged groups) and the nationalists was palpable and, I argue, has not completely subsided.

Another important factor is the sinister role Europeans played in heightening inter-ethnic tensions and conflicts, as noted by historical accounts (compare, for instance volumes 7 & 8 of the General History of Africa, published by United Nations Educational, Scientific and Cultural Organization, UNESCO). To what extent can we ascribe the current post-independence ethnic or tribal torment to the distal insidious machinations of colonizers who clearly favored one ethnic over others? For instance, we need to map the historical distal role the British played in instigating the Biafra War in Nigeria; and the historical distal role the Belgians played in the genocide in Rwanda and the current political and economic morass in the Democratic Republic of Congo.

In Liberia, we would need to map the historical distal role of racism in fomenting and justifying the domination of the Americo-Liberians over the ethnic groups of the interior including the Kru and the Mano. We know that the tension between these groups eventually led to a brutal civil war in the country.

We need to study these two phenomena – racism and tribalism – together more closely. Africans from south of the Sahara who cry ‘woe’ when they encounter racism in America, must search themselves for ideas of ethnic or tribal superiority as well and how these tribal ideas configure social relations in their countries of birth.

In reality, ethnic or tribal stereotypes persist in Africa. Recently (May 2008), I received from a friend an email spewing stereotypes (some negative) about four ethnic groups in Ghana [compare a similar posting here]; at first, I laughed at the rambling message; but the subtext was troubling; the email was spreading stereotypes I had heard growing up some 40 years ago in Ghana (credit dyer). I wondered: how can the repetition of these stereotypes help social interaction among groups? Such an email regurgitating stereotypes about racial groups in America would be racist and crass and it is no less when it is about groups in Africa. The consequences of lingering racial, ethnic and tribal stereotypes can be tragic – in the US and sub Saharan Africa. Ultimately, these stereotypes suggest a certain level of social distance – spatially and metaphorically.

I think we must instigate a global analysis of tribal, ethnic, racist thinking to see where they overlap and how we can combat them. We should survey African immigrants about their attitudes on ethnicity, and to what effect their perceptions of tribal or ethnic superiority interact with their experiences of racism.

But I think there is a broader research agenda here as well; how does white racism abet ideas or perceptions of ethnic group superiority in other continents and countries?