The AP is reporting that hundreds were arrested today at One Police Plaza. I was there, didn’t get arrested, but interviewed some people there about why they were at the protest, why they were getting arrested, and their experiences with racism in New York City. Here’s the (rough cut) of the video (about 5 minutes):

As I have been reading a lot about “race” matters and U.S. elections, including the views and discussions of Dr. Wright and Senator Obama, I have also been working on a book on the white racial frame and its long history. This makes me think a lot about the roots and foundations underlying today’s issues of racism. For this project, I have been doing a lot of research on the history of slavery and legal segregation. Clearly, these are the foundation of this country, with huge continuing significance.

One reason that the bloody realities of slavery, and later the near slavery of legal segregation, have shaped this society so fundamentally is because from their first decades they were legitimated by a dominant racial framing, firmly imbedded in private and state bureaucracies, and firmly legalized under North American laws. The development of the systemic oppression of Africans and indigenous peoples was made possible by the increasing organizational power of bureaucratized European and colonial companies and states. The norms of such military and other state and private bureaucracies accented stability, discipline, calculability of results, and impersonality. Mass killings and attacks were possible without bureaucracy, but recurring wars on Indians and a large-scale system of African American enslavement were not. Then, as in more recent times, extensive oppression requires complex organization and organizational agents and actors. Central to this bureaucratization and legitimation of slavery was the English and North American legal system. The legal system was, and still is, much more than just laws for by means of judges and other government actors, it enshrines and protects the elite-controlled hierarchical structure of society. In the North American case the legal system enshrined the views and values of the governing elite and, thus, a highly inegalitarian social structure for the new society.

The foundation of this legal and government-bureaucratic system is the U.S. Constitution. In 1787, in Philadelphia, fifty-five white men met and created a constitution for what has been called the “first democratic nation.” They were of European origin, mostly well-off for their day, and or had been slaveowners. Many others profited as merchants, shippers, lawyers, bankers from the trade in slaves, commerce in slave-produced agricultural products, or supplying provisions to slaveholders and slave-traders. In the preamble the founders cite “We the People,” but this did encompass those enslaved–one fifth of the population. As I show in Racist America, slavery was central to the making of this U.S. Constitution. At least seven sections of the Constitution protected the 140-year-old system of slavery: (1) Article 1, Section 2 counts slaves as three fifths of a person; (2) Article 1, Sections 2 and 9 apportion taxes using the three-fifths formula; (3) Article 1, Section 8 gives Congress authority to suppress slave insurrections; (4) Article 1, Section 9 prevents abolishing the slave trade before 1808; (5) Article 1, Sections 9 and 10 exempt slave-made goods from export duties; (6) Article 4, Section 2 requires the return of fugitive slaves; and (7) Article 4, Section 4 stipulates that the federal government must help states put down domestic violence, including slave uprisings. This is the same Constitution (and the same founders like GW) that so many people today say we should treasure and look back to as our model for equality, liberty, and justice as we deal with racism and other troubling issues today (?).

The bureaucratization and legalization of the oppression of Indians and African Americans made it easier for the European colonists and their descendants to rationalize that oppression. Gilles Fauconnier and Mark Turner (The Way We Think) have noted how in the human mind the bloody killing of groups of people–such as Native Americans, or later, European Jews—sometimes gets blended with “ordinary bureaucratic frames to produce a blended concept of genocide as an everyday organizational operation. Because the projection to the blend is only partial, certain people who could not bring themselves to operate in the frame of genocide may find themselves operating comfortably in the blend.” For the most part, systems of oppression like Native American genocide and African American slavery are not carried out by human “monsters” with extreme psychological disorders. Most European Americans, including the majority who did not hold people in slavery, supported the “normal” slavery system with their indifference or various forms of collaboration, such as buying and selling slave-produced products in markets. As Zygmunt Bauman (Modernity and the Holocaust, 1989) has argued in analyzing the recent oppression of European Jews, “Evil can do its dirty work, hoping that most people most of the time will refrain from doing rash, reckless things – and resisting evil is rash and reckless. Evil needs neither enthusiastic followers nor an applauding audience – the instinct of self-preservation will do.

These ideas of Fauconnier, Turner, and Bauman do help make sense out of how “normal,” bureaucratic, and everyday the foundational system of racism has become. Evils, like the highly racist attacks (the white racial framing, again) on Senator Obama and Dr. Wright, now in the several millions on the Internet, or the highly sexist attacks on Senator Clinton, only require most people to stand by passively on the sidelines. And these attacks and the racial/gender framing behind them will help account for the likely loss of either of them to McCain in November. Our centuries- long racist and sexist history makes this quite clear.

I welcome your thoughts and comments on this train of thought.

A series of acts of civil disobedience in response to the verdict in the Sean Bell case are planned throughout New York City today. 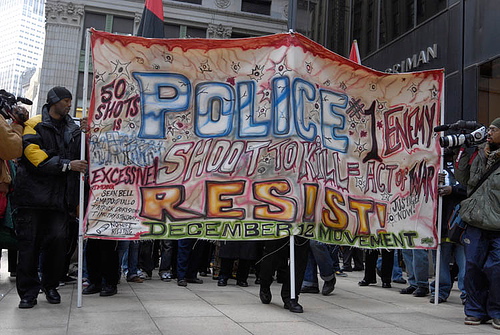 While there have been protests all along in this case (like the one in December, pictured here, from Joe Holmes via Flickr), the protests today are unusual because they are happening simultaneously at six locations in Manhattan and Brooklyn.   Described as a “pray-in,” protesters will kneel in pray in the streets to stop traffic during the evening rush hour traffic, and many plan to be arrested.   Rev. Al Sharpton and members of his organization, the National Action Network, are leading the protests aimed at demanding federal authorities bring civil rights charges against the officers in the Sean Bell case. The three officers were acquitted of all charges last month. NYPD and local news channels are expecting large crowds, and I will be there among all the others who are outraged at the taken-for-granted violence against black and brown people in this city.    And, Carol Taylor, said she will be there.  She’s quoted by a local news source saying:

Similar protests are  planned around the U.S., such as this one in Atlanta.  If you’re in the New York area, it’s time to get out, show up and demand a stop to police brutality.  If you’re outside New York, find a protest near you and join in.  Or, organize your own.