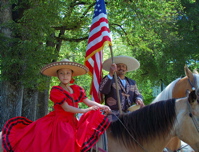 , which is celebrated in Mexican American communities (one such celebration in California last year, pictured right, photo credit) and not yet much outside those communities:

Cinco de Mayo is a date of great importance for the Mexican and Chicano communities. It marks the victory of the Mexican Army over the French at the Battle of Puebla. Although the Mexican army was eventually defeated, the “Batalla de Puebla” came to represent a symbol of Mexican unity and patriotism. . . . Cinco de Mayo’s history has its roots in the French Occupation of Mexico. The French occupation took shape in the aftermath of the Mexican-American War of 1846-48. With this war, Mexico entered a period of national crisis during the 1850’s. Years of not only fighting the Americans but also a Civil War, had left Mexico devastated and bankrupt. On July 17, 1861, President Benito Juarez issued a moratorium in which all foreign debt payments would be suspended for a brief period of two years, with the promise that after this period, payments would resume.

The English, Spanish and French refused to allow president Juarez to do this, and instead decided to invade Mexico and get payments by whatever means necessary. The Spanish and English eventually withdrew, but the French refused to leave. Their intention was to create an Empire in Mexico under Napoleon III. Some have argued that the true French occupation was a response to growing American power and to the Monroe Doctrine (America for the Americans). Napoleon III believed that if the United States was allowed to prosper indiscriminately, it would eventually become a power in and of itself.

In 1862, the French army began its advance. Under General Ignacio Zaragoza, 5,000 ill-equipped Mestizo and Zapotec Indians defeated the French army in what came to be known as the “Batalla de Puebla” on the fifth of May.

Clearly, it was a substantially indigenous army that defeated the mighty Europeans, an early and clear counter-colonialism event. This is an event that all who support self-determination for indigenous peoples and full human rights for all peoples should remember and honor.

The UCLA network account also makes some interesting observations about how this day is differentially celebrated in Mexico and the United States:

In the United States, the “Batalla de Puebla” came to be known as simply “5 de Mayo” and unfortunately, many people wrongly equate it with Mexican Independence which was on September 16, 1810, nearly a fifty year difference. Over, the years Cinco de Mayo has become very commercialized and many people see this holiday as a time for fun and dance. Oddly enough, Cinco de Mayo has become more of Chicano holiday than a Mexican one. Cinco de Mayo is celebrated on a much larger scale here in the United States than it is in Mexico. People of Mexican descent in the United States celebrate this significant day by having parades, mariachi music, folklorico dancing and other types of festive activities.

In my view, this is a good holiday for all those Americans who are opposed to colonialism and imperial invasions to celebrate.

When I taught a graduate seminar this past winter, I asked the class if anyone knew what the word “miscegenation” meant. No one did. And, when I teach at the undergraduate level, it’s the rare student who knows the meaning of that word at the beginning of the semester (they usually know it by the time the semester ends). So, I thought it important to recognize the passing of one of the pioneers in ending the anti-miscegenation laws in the U.S.

Mildred Loving, (pictured with her husband, Richard P. Loving, in a file photo dated 1965, from here), a black woman whose challenge to Virginia’s ban on interracial marriage led to a landmark Supreme Court ruling, died Friday, May 2, 2008 at her home in rural Virginia, her daughter said today. She was 68. From the AP story by Dionne Walker (and a hat tip to my friend Paul at BS for telling me about this):

Loving and her white husband, Richard, changed history in 1967 when the U.S. Supreme Court upheld their right to marry. The ruling struck down laws banning racially mixed marriages in at least 17 states.

“There can be no doubt that restricting the freedom to marry solely because of racial classifications violates the central meaning of the equal protection clause,” the court ruled in a unanimous decision.

Her husband died in 1975. Shy and soft-spoken, Loving shunned publicity and in a rare interview with The Associated Press last June, insisted she never wanted to be a hero — just a bride.

While Loving may have diminished her role as an activist she nevertheless delivered a powerful statement on the 40th anniversary of the Loving v. Virginia decision. Here’s a brief excerpt from Slaves of Academe (full text available there):

Surrounded as I am now by wonderful children and grandchildren, not a day goes by that I don’t think of Richard and our love, our right to marry, and how much it meant to me to have that freedom to marry the person precious to me, even if others thought he was the “wrong kind of person” for me to marry. I believe all Americans, no matter their race, no matter their sex, no matter their sexual orientation, should have that same freedom to marry. Government has no business imposing some people’s religious beliefs over others. Especially if it denies people’s civil rights.

I am still not a political person, but I am proud that Richard’s and my name is on a court case that can help reinforce the love, the commitment, the fairness, and the family that so many people, black or white, young or old, gay or straight seek in life. I support the freedom to marry for all.

Powerful words from a woman who claimed not to be an activist. So, why does it matter that I teach my students about the meaning of “miscegenation” when the courts ruled anti-miscegenation laws illegal in 1967? I think it’s important for what it tells us about how white racism operates then and how that same (il)logic continues to work today. In an interesting analysis over at The Faculty Lounge, Katheleen Bergin writes:

Loving is usually described as an “inter-racial” marriage case, but it even goes beyond that. The statute in Virginia didn’t ban “racially mixed marriages ” as the article describes, but only some racially mixed marriages. It made it a felony for “any white person [to] intermarry with a colored person, or any colored person [to] intermarry with a white person.” In other words, Blacks, Native Americans, Asians, or any other persons of color could marry with each other, but could not marry someone who was White. The state’s need to defend “racial integrity” as Virginia claimed fell flat because the statute was designed to preserve White racial purity exclusively. Its one of the quintessential White supremacy cases of the era.

Bergin’s cogent analysis of the old “racial purity” arguments of white supremacy from another era should make us wary of similar kinds of arguments today about supposed racial purity in the era of DNA and genetic testing. And, Loving’s passing is a reminder of the difference that once person can make in fighting against white supremacy.