It seems clear to me, given the pervasive illiteracy about both race and gender or the ways these intersect in our society, that the recent press tour by Rev. Wright is a disaster for the Obama campaign.   While I certainly agree with Joe’s point about the data supporting much of what the Rev. says, the fact is, mainstream [read: predominantly white] audiences in the U.S. are simply not equipped with the vocabulary to be able to discuss these issues in any way that captures the nuances.  Multiply that by the reverberation-chamber and dumbing-down effects of the 24-hour news cycle, and I am less optimistic than ever about Sen. Obama’s prospects for getting the nomination.   And, now this.

Errol Louis is reporting in the NY Daily News that the person who arranged Rev. Wright’s National Press Club appearance is an ardent 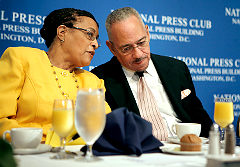 Hillary Clinton supporter (hat tip: thanks to my friend Paul at BS for bringing my attention to this story).   Here’s the top of the story, describing who Barbara Reynolds (picture here, photo credit) is:

A former editorial board member at USA Today, she runs something called Reynolds News Services and teaches ministry at the Howard University School of Divinity. (She is an ordained minister).  It also turns out that Reynolds – introduced Monday as a member of the National Press Club “who organized” the event – is an enthusiastic Hillary Clinton supporter.

Louis also includes some bits in his story about Reynolds’ trashing Obama’s “audacity of hope” theme.   Fair enough to criticize, but why orchestrate this event which is going to have the obvious result of throwing Obama under the proverbial bus?   If we were able to have a more nuanced discussion of racial and gender politics in this country, we might be able to talk about what it means that a black woman played a role in this and why black women (except for Michelle Obama) have been noticeably absent from the ‘race versus gender’  trope for talking about this election.  And, if were able to have a more nuanced discussion, we might talk about how Clinton is responsible, as a white woman, for a nasty little set of identity politics.

Yet, we won’t be having those conversations.

Instead, we’ll be listening to pundit after pundit talk about the personal jealousy between the “kooky” (how else to make sense of Black Liberation Theology?) Rev. Wright and the “political dirty tricks” of Rev. Reynolds.     Thus, leaving the collective debate stalled at the inadequately personal level and obfuscating real understanding than race or gender meme, rather than talking and thinking about the ways that race and gender intersect at the same time, in the same individuals within a broader social context of inequality.