As I predicted they would do in January, the traditional news media 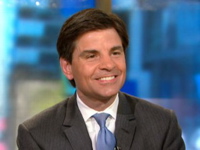 tonight have made yet more racist attacks on Senator Obama, attacks that have been on white supremacist websites now for months. First they intentionally distorted and misrepresented the rather old sermons of his former pastor, Dr. Jeremiah Wright. It appears that the hidden purpose of these media attacks is to do the dirty work of the conservative political attack machine and its aggressively white-racist agenda—to suggest in nonblack minds the old white racial frame’s image of the “dangerous black man.” Tonight at the ABC (“news”) sponsored-debate the ABC moderators, such as George Stephanapolous pictured above(image source), pressed Senator Obama about his onetime modest acquaintance with former radical activist and now University of Illinois professor William Ayers, formerly of the Weather Underground (which bombed federal buildings to protest U.S. overseas actions in the 1960s era).Here is a report on the debate as covered at mydd.com :

Obama is getting understandably exercised: “He lives in my neighborhood, he’s a man I know, he’s not someone I’ve received an official endorsement from or exchange ideas with. The idea that just because I know a guy who did something 40 years ago, that somehow that reflects on me and my values doesn’t make much sense, George.”

Clinton: “I believe that Senator Obama served on a board with Mr. Ayers, and continued to do so after 9/11 and after his purported comments [that he wishes the Weather Underground had done more], which many New Yorkers found offensive…I think it is, again, an issue that people will be asking about…This is an issue that certainly the Republicans will be raising.”

Yet again, Obama makes the obvious point that this relationship was modest and is old and of no political importance today. He does not agree with anything these radicals did, and never has.

We can see again just how openly viciously racist this campaign already is, and will yet be. And how hard it will be for Senator Obama to be elected president in this officially “colorblind” but still extremely racist country. Again, in my view, only aggressive anti-racist action across the nation can stop these highly racist media and other organizational attacks.

The key to the achievement of this goal is knowledge and information about higher education. And when it comes to providing the information that underpins this, Diverse: Issues in Higher Education has been at the forefront for the past twenty years. . . . . Since its founding in 1984, Black Issues In Higher Education (which is now Diverse) has been America’s premier news source for information concerning these vitally important issues. That the magazine received the 2002 Folio award as the best education publication in America only attests to how well we have carried out our mission of being the most reliable source for those who understand the importance of these issues.

In a recent article they discuss racial and ethnic research centers, including one at University of Illinois at Urbana-Champaign that grew out of an idea that I (full disclosure!) suggested to the provost there:

During this historic presidential election campaign, remarks with racial overtones have made headlines, offending some voters and garnering sympathy from others. The candidates have been required to interpret, explain, apologize for, denounce or distance themselves from these statements and those who made them. The missteps in the discussions about race at the highest levels of leadership in this country show the enormity and the complexity of the task faced by the University of Illinois at Urbana-Champaign’s Center on Democracy in a Multiracial Society. As a component of UIUC’s diversity initiative, the university established the center five years ago with the mission of producing “vigorous scholarly and public debate on the multiple racial contexts of democracy” and analysis of the “national dynamics of racial divisions and of democratic possibilities.”

They add that this increase in racial and ethnic studies centers is not limited to Illinois:

Brought forth by other universities and researchers along the same lines, race and democracy research centers have been established at other universities, including Stanford University, Texas A&M University and the University of California, Santa Barbara. “Part of the job of these centers is to begin telling the truth about American history and our racial and ethnic history,” [Joe] Feagin says. “As a country, we have not faced our history.”