Xicanopwr.com has a nice summary of the flap over an 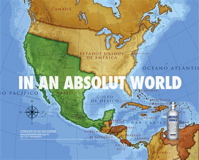 Absolut Vodka ad (image from here), one made by a major European company. The ad:

shows a historical map of the Mexico before Texas’ Independence and the Mexico-US War of 1846-48 had occurred. The offending map showed when the American Southwest – Texas, California, Arizona, Colorado, New Mexico, Utah, Nevada, and part of Wyoming – as we know it, belonged to Mexico. It was not until the signing of “Treaty of Guadalupe Hidalgo” that not only ended the war, but also defined our present-day borders. The ad was created by TBWA’s Mexican advertising firm Teran/TBWA. A year ago, Absolut vodka’s embarked in a new campaign strategy, breaking away from the old bottle series. The new Absolut World campaign invites the consumers to imagine their idea of a perfect world; a world that possibly wouldn’t take place but only “in an Absolut World.” The ad was solely geared toward the Mexican market.

This ad has stirred up a hornet’s nest on the anti-immigration sites and among nativist groups, as xicanopwr continues:

This all began when conservative columnist Michelle Malkin decided to use the ad to whip up anti-Mexican sentiment by dubbing the ad “Absolut Reconquista.” Soon after, the US media outlets noticed the ad. The outrage by the nativist over this ad has caused inspired an anti-immigrantion, FIRE Coalition, to start anti-Absolut website called AbsolutlyNot.com. The group also created a new web ad depicting an “Absolut World” as today’s borders with a giant fence between the US and Mexico. The nativist group is also asking people to boycott Absolut Vodka and is demanded that person who approved an ad be fired.

There is considerable anti-immigrant nativism here, as well as an ignorance about US history and how our imperialistic map got that way. The fact that most (especially white) Americans do not know, or prefer to forget, their brutal and imperialistic history in regard to Mexico makes it easier to rationalize these nativist attacks on an ad with an accurate map of what was once northern Mexico.

In April 1846 President James Polk, seeking to gain “all Mexico” (as he and other U.S. imperialists said), sent U.S. troops into an area (“Texas”) recently taken by force from Mexico, and then on into an area of the borderlands he knew Mexicans had long treated as sovereign territory. Polk intentionally provoked a border clash between U.S. and Mexican troops, an incident that enabled him to claim, falsely, that Mexico had started a war. Later historians have linked this trumped-up war to the imperialist and racist notion that the U.S. had a right to move into Mexican territory as part of its “manifest destiny” to rule over “lesser” peoples.

This imperialist notion rationalized the desire of many European American invaders for unjust enrichment in the form of land. Indeed, the border area where the first skirmish took place soon became the home for very large Anglo cattle ranches. In 1845 jingoistic journalist John O’Sullivan coined the “manifest destiny” phrase, when he wrote in the United States Magazine and Democratic Review that:

“Our manifest destiny is to overspread the continent allotted by Providence for the free development of our yearly multiplying millions.”

Together with many other European Americans, O’Sullivan argued that the U.S. government had a mandate to take the U.S. way of life to “backward” peoples such as Mexicans and Native Americans.

However, ironically, during and after the Mexican-American war some white southerners were concerned that too many of these mixed-race people might be brought into the United States. During congressional debates over annexing Mexican territory, prominent Senator John C. Calhoun argued that the U.S. had never:

“incorporated into the Union any but the Caucasian race. . . . Ours is a government of the white man. . . . in the whole history of man . . . there is no instance whatever of any civilized colored race, of any shade, being found equal to the establishment and maintenance of free government.”

In his view, as well as well as that of other whites, the “colored and mixed-breed” Mexicans were unacceptable in the “free” United States. Thus, the first Mexican residents of the United States did not immigrate, but were brought into the new nation by violent conquest during the Mexican-American War of the 1840s. With the end of the Mexican-American war came the incorporation of more than a hundred thousand Mexicans. They were forcibly absorbed into the expanding U.S. empire, which now encompassed a large portion of what was northern Mexico. White politicians and economic entrepreneurs sought to dominate the entire continent. In this they were very successful. Indeed, it is the European Americans who today are “aliens”–the descendants of invading “aliens” who took over northern Mexico by force. (For references on much of this history, see, among numerous places, here.)