No one ever said being a feminist would be easy and sure as hell, no one said it would be boring.

This week’s excitement arrives via The Nation (which I have subscribed to off and on since college) and Michelle Goldberg’s latest entitled, “Feminism’s Toxic Twitter Wars.”Hmmmm…wars is a bit much, dontcha think? So before I dive into this article’s arguments, let’s deal with the headline. 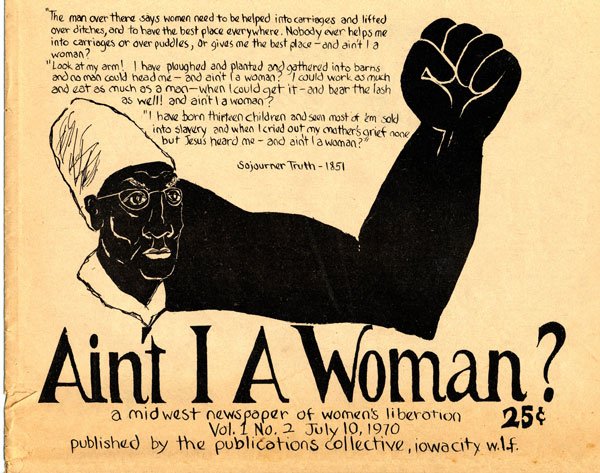 Declaring anything a war is a strong stance. Is feminism having a lot of heated debates and disagreements on twitter? Yes. Is it a war? No. A quick walk through feminist history in the USA and we will see political debate after political debate. Susan B. Anthony pleaded with Elizabeth Cady Stanton to leave the kids and hit the road with her. Surely some feminists side-eyed Amelia Bloomer and her pants. Sojourner Truth dropped the mic by stating, “Ain’t I a woman?” One of the biggest riffs happened during suffrage when the young whippersnapper, Alice Paul, disagreed with Carrie Chapman Catt and took her ball home. Paul started the National Women’s Party. As for disruption we go to Ida B. Wells who refused to march in a segregated suffrage parade. The first wave was full of heated debate & women of color disrupting. Let’s zip up to the 1970s and we find Betty Friedan and Rita Mae Brown arguing over the Lavender Menace. And don’t tell me that you haven’t heard a second-wave feminist do a double take over the theory of intersectionality. Hopefully you get my point that during the act of reorganizing our society to be free of sexism, racism, classism, homophobia and other injustices that those of us working towards this shared goal will have a lot of disagreement on how to get there.

For me,  that was the root of the #FemFuture critique. That a hand-picked group of feminists, living in NYC, sat around a table and plotted out the future of feminism, specifically feminism online. At the heart of their plan was how the revolution would pay its workers. For many feminists, that line of thought was offensive. And those feminists took to twitter to make themselves crystal clear that #FemFuture did not represent them.

Yes. I will concede that some of the tweets were personal attacks. I won’t condone those tweets. But the problem with selecting Mikki Kendall as the example of the feminist bully, is that there were more feminists than just she with harsh critiques. Call it what you want, but she is not the only one. She is just the one who has the spotlight on her. I think it is flawed to point out just one of her critiques of #FemFuture.  I  understand the limitations of an article, but online you can link to many examples. Just scanning through her tweets about #FemFuture, you can see that she had an epic laundry list of concerns, yet Goldberg chose to focus on Kendall’s most outrageous tweet.

The erasure of a larger critique by Latinas, Asian women, Native women of #Femfuture and other feminist conversations is quite honestly insulting. Our issues may not be the same and not every woman of color was critical of these conversations, but it was far more diverse than just black feminist twitter. Why are non-Black WOC being ignored? Because we are no less outraged on any given day about feminism. Native feminists are questioning “One Billion Rising.” Suey Park kicked ass with #NotYourAsianSidekick. AnaYelsi Sanchez, founder of #SecretLivesofFeministas, had this to say:

It isn’t just Black women pushing back. It’s all women of color. The sort of gaslighting and marginalization in Michelle Goldberg’s article is what sparked #SecretLivesOfFeministas and other similar movements. It’s easier to ignore us and focus on vilifying the “angry black woman” than to acknowledge the legitimacy of all of our anger. We’re not going away. We’re not sitting down. We’re not shutting up

The article spends a good deal of time discussing that many “white feminist” projects such as #femfuture, Jezebel and Feministing are not run by just white feminists. And this is true. And while I do think it is poor shorthand, for me, when I see “white feminism” in twitter critiques it means that the feminism espoused is exemplary of middle-class liberal feminism that is stereotypically seen in white feminists who fight for access to sterilization at 25, but ignore/are ignorant that WOC have been sterilized by force for decades. Perhaps we would be more pointed to say “liberal feminism,” but I am really not sure of that. I would love thoughts in the comments, as this is the one part I really don’t have a solution for.

It is true that due to the speed of critique on Twitter and other social media outlets, I do fear speaking out on some topics. But for me, it helps me stop and frame my argument better. I do a little more research and not just shoot off my mouth. Dr. Cooper says a lot of great things about the tension in the feminist twitter community. Most importantly that the critique and hurt feelings from WOC has valid roots. But as Prison Culture & Andrea Smith point out, the idea that online feminism was a happy happy joy joy super fun place before twitter is a myth (BTW – make sure to read that post!). And the focus on fun feminism is skewing our vision on the ultimate goal – ending patriarchy, racism, classism and all the other things that is oppressing all of us. Yes, we can have fun, but lamenting the loss of fun feminism is the least of my concerns.

Crenshaw says intersectionality hasn’t “been about chastisement”, ” but rather a collective effort to build a feminism that does more of the work that it claims to do.” For me, this is what Mikki and other WOC feminists have been doing in their critiques. When Mikki asks if WOC get to be a good mothers, she is asking for feminism to do what it claims to do. I really enjoyed the paragraph where Dr. Cooper explains the use of intersectionality as a benchmark for all feminists online. Am I the only one who chuckled at the idea that WOC feminists have finally become too academic for our own good?

There are two unnamed Twitter users in this piece. I asked Goldberg why she failed to name the white feminist who “whitesplained” to Jamia Wilson. So far no response yet. But it is curious that either Wilson or Goldberg have chosen to hide this persons identity.

The other unnamed Twitter user is the one who backs up @DrJaneChi on not using vagina in reproductive justice work. I should point out that Martha Plimpton labels her work “reproductive freedom” and not “reproductive justice.” This is important as the justice framework works with the idea that men and women (cis and trans) are united in repro justice and is more sensitive to using body parts to stand in for ideas.

I find this a VERY HARD habit to break and I know I fail many times, but try to catch myself. For me, it stems from wanting to take back sayings like “That took balls!” to “That took ovaries!” when in fact some women (cis and trans) do not have ovaries. I try to ask myself, “Do I need to name a body part for this argument to work?” Sometimes that answer is yes. Sometimes no.

Let’s circle back to Kendall. The “She seems warm and engaging, but also obsessed” line is so awful, just awful. We have seen feminist blogs EXPLODE over women politicians be described in this same manner. Hell, it reminds me of when then-Senator Obama said that then-Senator Clinton was “likable enough.” I’m been on the radio (Vocalo) with Mikki. We follow each other on Twitter, but we’re not hanging out on a regular basis. But I think she’s a pretty nice person, but nice is not the point of feminist debate. There are plenty of us “obsessive feminists” on twitter. Check out #NotBuyingIt for a taste of how obsessive some of us can get.

In the end this larger conversation is about power.

As I said earlier, I do agree that some critiques fall under the category of attacks. I don’t support those. I think there is plenty to critique without using personal attacks. But the land of punditry has changed with social media. While you can avoid reading the comments section of your op-ed, you can rarely avoid the @ section of your twitter feed. This means that the indie feminist blogger has equal access to “the conversation” as the feminist who is paid $10,000 to speak at a college campus, has multiple books and a contract with a TV station. It can be scary to face the critique head on.

Twitter is being archived in the Library of Congress. This means that we are writing history every single day. This means that if anyone claims to represent feminism, those of us who have a critique must express the critique, otherwise the record shows silence as agreement. Twitter is not just a frivolous play thing. It can be and we often treat it as such. But when it comes to debating feminism online, it is serious business.

~ Guest blogger Veronica Arreola writes at Viva La Feminista, and has since the early 2000’s. She writes at the intersection between feminism, motherhood and her Latinadad. This post originally appeared on her blog.