As I make plans and preparations to attend the March for Women in Washington DC this Saturday with my teenage daughter—with controversy already swirling around it—I find guiding wisdom studying the words of Dr. Martin Luther King, Jr.

King reminds us that doing what is morally right is often not easy, comfortable or convenient. Well, my daughter does not much like crowds, and we will be getting up at 5am and being on our feet all day, but we’ve done just as much for something more frivolous such as a family vacation. No, the discomfort I believe King spoke of is much less superficial, and much more permanent. Not the discomfort to our bodies, but hurt and pain on our hearts and souls. The kind of reproach and rebuke that might come from someone whose opinions of us we care about, maybe even those we love. Or those with whom we might have marched shoulder to shoulder, whose causes with whom we may have been aligned, under better circumstances.

King is known for being a leader—one of many leaders in the civil rights movement—and I have been awed and inspired by this new generation of leaders who are engaging with the March. Several brave women appear to be living by some of the more difficult Kingian teachings, illuminating the difficulties and complexities of the “long arc” of justice that King described. Not knowing what they did not know, initial organizers first termed the event the “Million Woman March,” but rightly backpedaled and withdrew this title once it was pointed out to them that African American women in Philadelphia marched under this name in 1997. Heated Facebook discussions ensued between women about the long history of race and class tension within the feminist movement in the US, amidst reorganization and broadening of the March’s focus and policy platform to incorporate better not only women of color, but all marginalized and oppressed human beings.

It is difficult to put in words the courage one must summon to accept correction and rebuke and remain engaged in solidarity with others. It is much easier to withdraw and take comfort in those who you perceive will not challenge you. When someone is already feeling wounded, they may understandably take the simpler road for a time until they can build up the strength to engage once more. For example, I have written elsewhere (in my Whites Confront Racism and in Doane & Bonilla-Silva’s White Out about the courage and humility needed to stay on a lifelong path of white antiracism. It is not a path for the faint of heart. You will be called out more than you know. Those who feel like they are doing something special by just showing up will be in for a rude awakening. The courage it takes to say, yes, I made a mistake—not in private by yourself, but with others watching—taking responsibility and walking forward to redress one’s wrongs, is not for everyone. But King’s words can serve as a blueprint and moral compass for such a crossroads:

Some who originally wanted to March have now withdrawn, saying they no longer felt “welcomed.” King rightly points out that being deserted and by potential allies is the “greatest betrayal”—much more so than those who we did not expect to support us anyway.

I am inspired by Lena Gardner, a Black Lives Matter group’s co-founder in Minneapolis, who when interviewed by NPR about the March and asked whether she was hopeful or skeptical about it, answered “both-and.” Gardner stated:

We’ve been out in the streets marching for years. And a lot of white people haven’t been there with us. And now, suddenly, they feel like it’s really important that they come out. So are you marching because you’re upset because you didn’t get your way, or are you marching because you recognize that your life and your liberation is connected to mine now? And I think there’s a long way to go between those gaps. But in my work in the past two years, I’ve seen it happen. So I have hope that it’ll happen for some people. I know it’s not going to happen for everyone. But all I can do, again, is meet people halfway and say welcome to this work. It’s really hard. It’s really difficult, and there are no certain answers.

The organizers of the March, from the current state of their website, explicitly cite Kingian principles of nonviolence as their guiding vision. They rightly characterize nonviolence as “courageous” (don’t mistake kindness for weakness!), and note that “defending the most marginalized among us is defending all of us.” Their vision mirrors that of Dr. King, when he says:

It really boils down to this: that all life is interrelated. We are all caught in an inescapable network of mutuality, tired into a single garment of destiny. Whatever affects one destiny, affects all indirectly.

King’s wisdom resonates today as clear and as urgent and as relevant as it ever was. The road is not easy, but you dust yourself off, get up again, and do the work, because we all sink or swim together. Ultimately, cutting part of the human family off is not going to get any of us where we want to go.

When the world around you seems to be calling for business as usual–amidst cruelty, lies, and disregard for your human dignity–what is the morally upright course of action? King tells us it is to keep showing up, keep speaking up, and never keep silent, because “the day we see the truth and cease to speak is the day we begin to die.” The Women’s March aims to “join in diversity to show our presence in numbers too great to ignore.” It is surely a day that will make Dr. King proud, for it will be the result of struggles both internal and external, emerging victoriously knowing that it is precisely our differences that is our strength. 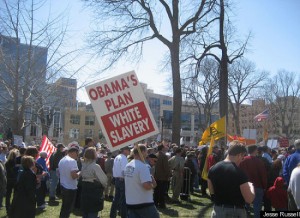