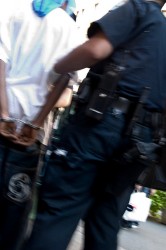 The Department of Homeland Security (DHS) has a goal of deporting 400,000 people from the United States every year. The policy of DHS to deport as many people as possible is advertised as a measure that enhances national security. The way that mass deportation is implemented, however, leads to the disproportionate deportation of black Caribbeans and Latin Americans. Because of the disproportionate impact of deportation on black and Latino immigrants, the policy of mass deportation is another manifestation of racial inequality in the United States. 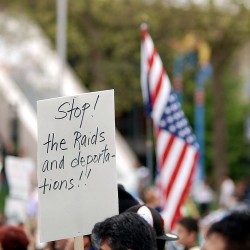 Given that DHS claims to be making the nation safer through deportation, it is remarkable that they almost never deport people to countries which the U.S. Department of State identifies as sponsoring terrorism – Iran, Iraq, Syria, Libya, Cuba, North Korea, and Sudan. In 2007, for example, 319,382 people were deported. Among these were 49 Iranians, 27 Iraqis, 40 Syrians, 76 Cubans, and 13 Sudanese. (Data were not available for Libya and North Korea.) Instead, deportees are most often sent to countries with which the United States has amicable relations – our allies in the Western Hemisphere. Human Rights Watch reports that 897,099 people were deported on criminal grounds between April 1, 1997, and August 1, 2007, and that 94 percent of these people were from just ten countries, all in the Western Hemisphere – Mexico, Honduras, El Salvador, Dominican Republic, Guatemala, Colombia, Jamaica, Canada, Brazil, and Haiti,

The laws that have led to mass deportation were created in the context of fears of a racialized other. The 1986 Immigration Reform and Control Act (IRCA), which lay the groundwork for much of present-day undocumented migration and employment, was the result of nativist concerns over rising numbers of undocumented immigrants in the United States. The 1996 laws, which expanded the grounds for deportation, were an outgrowth of Proposition 187, a California initiative with many racial overtones. The Homeland Security Act, which allowed for the funding of mass deportation, came about in the context of fear of terrorists, often racialized as Middle Eastern. Although these laws are color-blind on the books, both their enactment and implementation are tainted by implicit and explicit acts of racism.

As Melvin Oliver and Thomas Shapiro (among other scholars) explain, it is not necessary for laws to use explicitly racial language to reproduce racial inequalities. Insofar as laws, policies, and institutions create inequitable outcomes in their implementation, they can be considered part of the structural racism that has pervaded U.S. society since its inception.

~ Tanya Golash-Boza is an Assistant Professor of Sociology and American Studies at the University of Kansas. She blogs at Stop Deportations Now.