When seeing the dancing “Redskin” Wahoo fan below, many Americans think it’s okay as it’s “just fun,” or it is some kind of twisted way to “honor” Indians, or it’s “only a symbol” not meant to hurt anyone. However, there are real, pernicious effects coming from the public display and theatrical racism of these symbols and “race” costumes and all the antics that are an integral part of their use and history.

When I was participating with the Black Hills Cultural Institute held in Spearfish, South Dakota, primarily for school districts on the Rosebud and other Lakota / Dakota “Indian reservations” with large numbers of Indian students, news came that the mainstream academic and media had finally acknowledged that the bodies of some of the Dakota men hung at Mankato by the United States military government, had indeed been immediately exhumed and given to those requesting the body parts, especially a prominent doctor in Minnesota (Dr. Mayo who later founded the famous clinic under his name).

Dakota survivors had long said they had done this, and much worse, but were always mocked and discounted. As a great grandson of Mayo apologized and returned the skeletal and other remains, (including skins made into lampshades and bones with tattooed numbers on them) the newspapers duly reported the genocidal stories as being true. One Dakota woman teacher of our group started crying, and then weeping, as we discussed this during a break in our workshops on “historical grief” and “generational trauma” for Indian descendants of these and many other infamous massacres. Finally consoled by her Dakota relatives, when asked what was the matter, she said “He was my great-grandfather, they are talking about my grandfather! My grandmother cried every night, and told us what they had done, and no one believed us and called us “liars” and worse, but we always knew our relatives were telling the truth.” 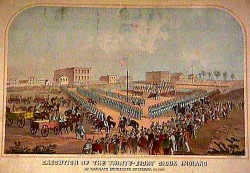 It is hard to imagine a more direct cause-and-effect of mass killings, or in this case of a mass execution, the largest government sanctioned hanging in our country’s history, than to see and hear from those who survived and yet were never allowed to tell their stories, much less be acknowledged how deep their grief may be. Symbols such as “Chief Wahoo” and team names and words such as “Redskins” racially categorize Native peoples as less than fully human, and harken back to terms such as “savages” (literally used in the Declaration of Independence) that depict “Indians” as uncivilized and war-like.

Actually, these terms have been used in genocidal attacks against both my bloodlines – the Dakota after the 1862 Mankato hangings as Minnesota offered “$200 for every Redskin sent to Purgatory” with proof from scalps or “dead bodies” for the bounty, and the Lakota as prelude to the killings of our families at Wounded Knee when newspapers stirred up racial hatred with headlines such as “Old Sitting Bull Stirring Up the Excited Redskins” and “Some Bad Redskins” with Big Foot in the winter of 1890. 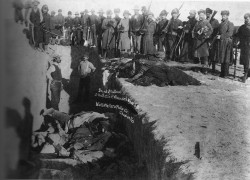 In the denial of massacres and genocide and destructive conquest across the land, we must understand that these histories are not taught in the schools and universities of our nation, and they are not often  taught in the curriculum where Indian peoples attend. When I was giving my 1890 Ghost Dance on Standing Rock lectures as a Humanities Scholar at the High School in Fort Yates on the reservation, a few students came forward and would not leave, with one missing his bus ride to Bullhead because he wanted to talk after everyone left. It turns out his relatives had died at Wounded Knee, including headsman Big Foot, and this not only was never discussed in his classes, but was actually discouraged.

But with real relatives who experience the trauma of unresolved grief and unacknowledged wrongs, great psychological harm is transferred across generations.

It is amazing that a large portion of American society does not see this as racism, or even as hurtful, discounting both research and testimony of scholars and Native leaders and traditionals, and research, in how these images, names and antics cause psychological and cultural harm to Native children,

In their book Missing the Point: The Real Impact of Native Mascots and Team Names on American Indian and Alaska Native Youth, Erik Stegman and Victoria Phillips found that studies show such names contribute to a negative educational environment:

“Research shows that these team Indian-oriented names and mascots can establish an unwelcome and hostile learning environment for AI/AN students. It also reveals that the presence of AI/AN mascots directly results in lower self-esteem and mental health for AI/An adolescents and young adults. And just as importantly, studies show that these mascots undermine the educational experience of all students, particularly those with little or no contact with indigenous and AI/AN people. In other words, these stereotypical representations are too often understood as factual representations and thus “contribute to the development of cultural biases and prejudices.”

This kind of racism is repeated in the team fight songs for sports teams, for example in  “Hail to the Redskins,” the lyrics that fans sing are:

“Hail to the Redskins, Hail Victory, Braves on the Warpath, Fight for Old D.C.!… Scalp ‘um, swamp ‘um, we will take’um big score….”

These lyrics were written by Corrine Marshall, wife of R*dskins owner George Marshall.
American Indians have been experiencing a Renaissance of cultural revitalization. Part of this revitalization has been through work done with the Harvard Project on American Indian Economic Development.  This project has found the most productive efforts are those that emphasize “nation-building” where Native peoples utilize the skills that focus on Sovereignty, Institutions, Culture and Leadership Matters. Each of these critically important areas is in direct contrast with the images and words that mascots and racial team names represent. Native children are usually taught that eagle feathers are given in respect to those who earn them, whether for civic leadership, defending the people in war, or as living with the values the elders teach – so it’s insulting and confusing when they see these plastic and turkey feathers in mock behavior of sports fans. American Indian students are taught they are the descendants of Nations and societies worthy of recognition, respect, and even reverence – so when fans go “whup-whup-whup!” as they yell “Go Tribe” or “Kill Redskins” with Tomahawk chops and little fake scalps over painted faces, their heritage is called into question. Indigenous youth are instructed in ceremonies and traditions that are culturally valuable and sacred – even as be-feathered racist antics suggest that Americans mock and denigrate their cultures.

There is abundant evidence to support the negative impact of these racist stereotypes on children in indigenous cultures, such as Stephanie A. Fryberg, lead author of a 2008 study, Of Warrior Chiefs and Indian Princesses: The Psychological Consequences of American Indian Mascots. Most recently, Michael A. Friedman compiled a report on various studies in his The Harmful Psychological Effects of the Washington Football Mascot. 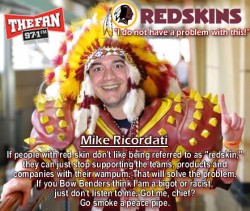 American Indian students are involved in consciousness-raising over these issues and becoming more outspoken on the harmful effects that these represent to them as individuals and as tribal members. Recent studies are documenting these statements. The following are quotes from Indians that Stegman and Phillips spoke with on their views about names and mascots.

“One of our school’s biggest rivals is the Calaveras Redskins. … Worst of all, the most offensive stuff doesn’t even come from the Redskins. It comes from their rival schools, mine included. I have heard my own friends yelling around me, ‘Kill the Redskins!’ or ‘Send them on the Trail of Tears!'”

“The issue impacts me because as long as the Washington football team and others retain pejoratives as names, mascots, and are allowed to do so, it says that it is ok to marginalize me, my family, and Indian country—that it is ok for Native peoples to remain on the periphery of American consciousness.”

When I see people wearing headdresses and face paint or doing the tomahawk chop, it makes me feel demeaned. The current society does not bother to learn that our ways, customs, dress, symbols and images are sacred. They claim it’s for honor but I don’t see the honor in non-Natives wearing face paint or headdresses as they are not warriors and who have earned the right. My heritage and culture is not a joke. My heritage and culture is not a fashion statement. For me, it ultimately boils down to respect.

Even more surprising is that defenders of these sports mascots, particularly the Washington Redskins, deny any negative effects and even claim that Native Americans broadly support their use, up to 90% according to one poll quoted ad nauseam by team owners and fans. This is where bad social science intersects with institutional racism, and where my work on similar issues some 20 years ago in Cleveland needs to be redressed for Washington. In my earlier research, we ran our own survey with American Indian respondents, and the results are more in line with what we know Native peoples are feeling and talking about, finding the “large majority of American Indians, when properly identified and polled, find the team name offensive, disrespectful and racist.”

That research found that American Indians were 67% in agreement, 12% were neutral and 20% disagreed with the statement: “The Redskins team name is a racial or racist word and symbol.” Whites were 33% in agreement, 26% neutral, and 41% disagreed the term was racial, generally the reverse of American Indian responses. The neutral category played a significant role for whites in allowing them to not be seen as “racist” – upon further analysis more than 60% of whites reject the term Redskins as racist, while more than 60% of Indians see the term Redskins as racist.

We released the results of this study in the spring of 2014, but got little attention from mainstream media outlets. The Washington Post interviewed me about methods, asking who did the collecting (“were they Indian?”) and so on, but have not, to date, reported on it. The dismissal and denial of Indian genocide and its lasting effects runs deep in most sectors of American society, especially those cities and universities still employing these racial mascots.

Some twenty years ago I took my first tenure line position at a Jesuit university just outside Cleveland, Ohio, where the most pernicious sports mascot icon exists, the “Chief Wahoo” of the Cleveland Indians baseball team.   Just as in Washington, they claimed it was to “honor” Native peoples or it had nothing to do with race or Indians, sometimes in the same sentence response to our survey on such attitudes. Again, how can reasonable people make such claims to any of these racial sports mascots, much less the two most egregious examples, the Washington “Redskins” and the Cleveland Indians’ “Chief Wahoo”?

Some forty and more years since this issue was first charged to the Washington Redskins and Cleveland Indians, we still have “be-feathered, dancing Chiefs” in straight-out racist antics, with clear connections to the worst practices of genocidal racism in our nation’s history. We still have white elites, such as George Will and Dan Snyder  supporting and defending these deeply racist images and names, citing popular support and bogus polls, and denying this is just the same-old racism of yesteryear. And we still have Native American children suffering from having been surrounded by these racist images and words, and Indigenous students in conflict with what they are taught in their schools and textbooks.

When will America wake up, and see that the perpetuation of these racist images and terms is an ongoing insult to Indigenous Peoples and Native Nation?