Now that some of the dust has settled following the shooting of 12 cartoonists from the satirical magazine Charlie Hebdo in Paris, the numbers are in.

According to a recent Pew survey  (n=1,003), 3 in 4 Americans heard about the attacks on Charlie Hebdo and 60% supported the magazine’s depiction of the Prophet Mohammed, echoing the rallying call “#IAmCharlie” that took the internet by storm in the days following this tragic incident. In fact, #IAmCharlie became one of the most tweeted hashtags in Twitter history. 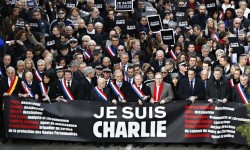 Among those who defended the cartoons as acceptable, the study finds two things were key among supporters. 70% cited “freedom of the press” to defend their positions, and roughly 1 in 10 defended the magazine as an “equal opportunity offender” that took jabs at all groups, not just Muslims. But a closer look at the numbers reveals a significant gap between whites and non-whites and their approval of the cartoons. While 70% of whites believed it was “Okay” for the magazine to publish insulting cartoons of the Prophet Mohammed, only 37% of non-whites believed they were acceptable.

In other words, if you tweeted #IAmCharlie in the days following the incident, it’s safe to say you were probably white—and male (67% of males and 52% of females thought the cartoons were “Okay”). Even among liberals we can see a clear racial divide on this issue. Among liberals, 66% of whites supported the cartoons, while only 39% of non-whites did.

What this survey reveals is that beliefs in notions like “free speech” and “the sense of humor” are colored by race. Moreover, it illustrates that a “white racial frame” was at play for individuals making sense of this tragic incident. According to sociologist Joe Feagin, a white racial frame is a dominant ideological perspective that allows whites (and often non-whites) to interpret discriminatory and oppressive events and information in ways that defend and accentuate white actions as righteous. From this perspective, the insulting cartoons of the Prophet may be “tasteless,” but they were merely an exercise in “free speech,” a core Western value after all. Moreover, a white racial frame suggests the magazine was vulgar and offensive in a “responsible way”—it mocked everyone, even the Pope! Therefore, the real problem is Islam, not the cartoons.

While some have tried to defend this kind of humor on grounds that the tradition of satire has always been to “punch everyone,” my research on racial humor suggests that an “equal opportunity offender” strategy is a more recent phenomenon. For instance, in the U.S. it was only after communities of color publically challenged the decades long use of racial ridicule by whites (e.g., blackface minstrelsy) during the civil rights movement that white humorists began to diversify their targets to avoid being labeled “racist.” Moreover, countless examples illustrate that “satire” works most effectively when it “punches up” not down the social hierarchy. That is, when it challenges the prevailing power structure (Richard Pryor and George Carlin come to mind. See Hari Kondabolu, Aamer Rahman, and John Oliver for more recent examples). Otherwise, such “humor” is little more than taunting and bullying and only works to confirm existing power relations.

Yes, we should all condemn the killing of the cartoonists. But, in the wake of the routine shooting of black and brown bodies by police officers, the ongoing “war on terror” that targets Arab-Americans as suspect, and let’s not forget the ongoing wars in the Middle East, historic levels of incarceration of blacks and Latin@s, and the mass deportation of Latin@s, it’s no surprise that for people of color in the U.S. it’s was kind of hard to #IAmCharlie.

In the end, the attacks on Charlie Hebdo will work to strengthen a white racial frame if we do not work to challenge it. This incident will be used to highlight Muslim extremism and violence as the rule, rather than the exception, and further justify racial profiling. It is worth pointing out that the reverse does not make sense through this powerful racial frame. White shooters are not viewed as terrorists, and their actions are not reflected upon all whites. And therein lays the danger of this dominant racial frame in reinforcing a system of racial inequality.