This blog post is coauthored by Anthony Weems, Kristi Oshiro, and John Singer 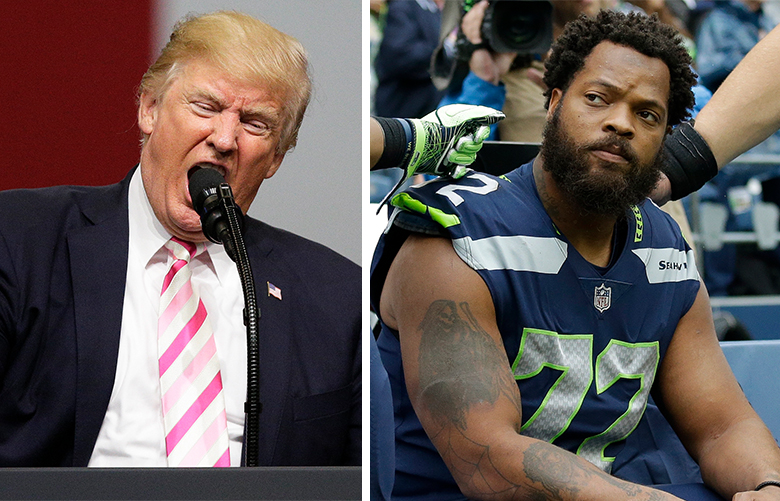 Friday night’s rally in Huntsville, Alabama sparked the beginning of what proved to be a hectic weekend for President Donald Trump. Only, the chaos was not related to the upcoming Senate health care vote or post-hurricane relief in Puerto Rico as some might expect but rather the president felt the need to address athlete activism, specifically targeting the National Football League (NFL). In a weak attempt to redefine black athletes’ protests of systemic racism, oppression, and police brutality as a disrespect to the US flag and the US military, Trump criticized NFL players who have openly protested by kneeling or sitting in peaceful protest during the national anthem. Moreover, Trump arrogantly and disrespectfully referred to these athletes as “sons of a bitches”, and suggested owners should exercise their power and have them fired. He would later take to Twitter and argue that the NFL should make their players stand during the national anthem. In the days that followed, NFL players, coaches, owners, and other personnel met to discuss how to strategically respond before taking the field for the highly-anticipated game day on Sunday.

As for the NFL, September 24th, 2017 will forever go down in history as “choose-your-side Sunday.” Coming on the heels of the Alabama rally, the comments made about NFL athletes protesting served as a catalyst for a protest unprecedented in the NFL (or any other league for that matter). Whether kneeling, sitting, locking arms, raising fists in solidarity, or remaining in the locker room altogether during the national anthem, as a collective unit the NFL made a statement that transcended national boundaries, as hundreds of athletes, coaches, owners, executives, and other staff across the league responded in unity to criticisms made by Trump. However, in all of the chaos springing from the weekend of September 22nd, 2017, it is important that we refocus our attention on what it means to #TakeAKnee.

Colin Kaepernick and Taking the Knee

When Colin Kaepernick first refused to stand during the national anthem in 2016, he was pretty much alone. Though many black athletes and athletes of color had been using their platforms to bring racial injustice to the forefront for years, Kaepernick’s silent and peaceful protest during the national anthem brought the politics of racism and police brutality into the homes of many Americans – particularly, white Americans:

“I am not going to stand up to show pride in a flag for a country that oppresses black people and people of color,” Kaepernick explained shortly after kneeling during the playing of the national anthem before NFL games. “To me, this is bigger than football and it would be selfish on my part to look the other way. There are bodies in the street and people getting paid leave and getting away with murder.”

Working with Dr. Harry Edwards while still a member of the San Francisco 49ers, Kaepernick engaged in peaceful protest that sparked what Dr. Edwards has referred to as the fourth wave of black athlete activism. Originally, this silent protest only involved a handful of other NFL players such as Kaepernick’s former teammates, Eric Reid and Eli Harold, or Michael Bennett of the Seattle Seahawks. Kneeling as a form of silent protest, however, would continue to spread across sports.

Throughout various sports and across different levels of sport participation, black athletes (both male and female) began to take a knee to bring awareness to the unjustified treatment of Americans of color, particularly black Americans that were murdered while the police officers responsible often received paid administrative leave. Players in the WNBA have consistently been at the forefront of protests for racial justice in recent years. Bruce Maxwell has become the first Major League Baseball (MLB) player to kneel during the national anthem. Raianna Brown, a dancer/cheerleader at the Georgia Tech, recently knelt during the national anthem. High school athletes across sports have knelt during the national anthem. Even youth teams across sport have taken to the protest of taking a knee.

Creating what many are referring to as “the Kaepernick effect,” the gesture of kneeling in sports has become a movement in itself. And for those who have boldly taken the knee, the message has remained clear. Even as entire NFL franchises have come forward in support of player protests during the national anthem, the message has not changed. Take this statement from the players of the Seattle Seahawks before their game on Sunday for example:

The current protests by players in the NFL have been about and continue to be about “the injustice that has plagued people of color in this country.” In fact, contrary to many claims of these protests disrespecting the US flag or the military, the Seahawks players’ statement emphasizes honoring the country and the sacrifices that have been made in the name of equality and justice for all.

Following his firsthand experience with excessive force used by the Las Vegas Police Department on the night of the Mayweather/McGregor boxing match, Seahawks defensive lineman Michael Bennett clearly stated that this kind of conduct by police is precisely why he kneels during the national anthem before every game. Note how Bennett says nothing in his statement about the US flag, the US military, or any other nationalistic form of politics in his statement. The protest has always been about how communities of color are policed and the devaluing of black and brown lives in the criminal (in)justice system. When Trump lashed out at NFL players who were protesting, he wasn’t defending the flag, military veterans, or patriotism – he was racially targeting US citizens who have bravely spoken up and out against a racist system.

In recent years, athletes across sport leagues have consistently protested the systemic devaluing of black and brown lives by the judicial system. But following Trump’s comments about protesting (black) athletes needing to be fired and required to stand for the national anthem, NFL players responded. In a league-wide statement of unity amongst each other, NFL players sent a message. Across the league, players (and some coaches, staff, and administrators) either kneeled during the national anthem, locked arms with one another, raised their fist in solidarity, or refused to come out onto the field altogether during the anthem. And players such as Miami Dolphins safety Michael Thomas made it clear what message they were trying to send. In an interview on CNN, Thomas stated the following:

“[The protest] is about race,” he said adding that the players are fighting for “inequalities in our communities… It’s not about just us. It wasn’t about Kaepernick himself. It wasn’t about, you know, the athletes who chose to take a knee themselves,” Thomas said. “We’re speaking for everybody that’s come from the communities we’ve lived in and my family and friends still live in.”

The mainstream media have played a significant role in perpetuating this a-critical discourse that dilutes the very core of the message courageous individuals like Colin Kaepernick and others are trying to send. This has potentially created confusion amongst viewers that can be detrimental to the purpose of kneeling. In turn, current players like Eric Reid who was the first to kneel alongside Kaepernick are speaking out to reclaim their narratives and clarify the essence of their protest. In a recent New York Times opinion piece Reid shares his personal insight reflecting on the time dedicated to making the very informed and educated decision to stand up for his and others’ rights and to kneel during the national anthem in what he felt was the utmost respectable way.

What’s Patriotism Got to Do with It?

In 2016, Colin Kaepernick stated the following: “There’s a lot of racism disguised as patriotism in this country… but it needs to be addressed.” Over the course of the protests undertaken by predominantly black athletes and with the help from mainstream media outlets, many whites have sought to paint or label the protests as some sort of unpatriotic display that disrespects the US and its military. For whites, this isn’t exactly a new phenomenon. White Americans have long used “patriotism” as a proxy for white nationalism dating back to the Founding Fathers’ invocation of the “common cause” of white patriotism. Contemporarily, white nationalist groups such as the Christian Patriots Defense League have risen to prominence under this same banner of the patriot cause.

But for Americans of color, and particularly black Americans, the patriotic ideals of liberty and justice for all have historically been taken seriously. For instance, as W. E. B. Du Bois discussed in The Gift of Black Folk, the ideological challenge to the white-defined ideals of freedom and justice through the political struggles for equality by black Americans has helped significantly to push the US towards being a more democratic nation for all. This is true throughout US history as well as in today’s context. The Seattle Seahawks players’ statement referred to above embodies this challenge to the notions of equality and justice for all while simultaneously honoring those that have fought for these freedoms.

The language of white racism today is often masked by claims to patriotism. But when US President Trump referred to neo-Nazis marching in the streets of Charlottesville, Virginia as “very fine people” and black NFL athletes as unpatriotic “sons of a bitches,” NFL players were explicitly put in a position where they had to decide between standing for justice and supporting white supremacy. A US president – or anyone for that matter – that espouses this kind of rhetoric has no claim to patriotism; they are a white supremacist. The real patriots in this scenario are those that have (and continue to) courageously use their social platforms to bring critical issues to the forefront in the quest to make liberty, justice, and democracy a reality for all. Real patriots stand alongside one another and against systemic forms of oppression such as police brutality. Real patriots #TakeTheKnee.

Anthony J. Weems is a doctoral student in Sport Management at Texas A&M University working under Dr. John N. Singer. His research focuses on issues of race, power, and politics in and through the sport organizational setting.

Kristi F. Oshiro is a Sport Management Ph.D. student at Texas A&M University working with Advisor Dr. John N. Singer. Her research interests include diversity and inclusion in sport with a focus on the intersection of race and gender, culture, and the lived experiences of ethnic minority groups and marginalized populations from a critical perspective.

Dr. John N. Singer (Ph.D., The Ohio State University) is an Associate Professor of Sport Management at Texas A&M University. His research interests primarily focus on a) intersections between race, sport, and education, with a keen focus on complex and contextual realities Black males face as primary stakeholders in organized school sport; and b) diversity and social justice matters in sporting institutions and organizations, with an emphasis on the experiences and plight of historically underrepresented and marginalized groups.