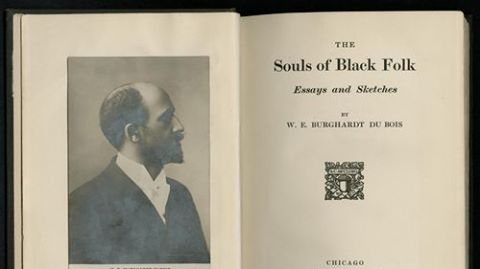 As a Jewish child growing up in Israel, I was obsessed with the holocaust. Many nights I couldn’t sleep, afraid of nightmares. I vividly remember the repeating thought in my head: if I was born just a few decades ago, I would have been considered a problem. A problem so threatening that it must be killed or at least controlled.  As I grew up, I learned of Apartheid South Africa, of the conditions of those living in occupied Palestine, and about the ongoing segregation and oppression of people of color in the United States. I realized that although I could have potentially been a problem, many people are living their entire live as a problem. Of course as a kid lying awake at night in Tel Aviv I didn’t know to articulate the issue in these exact words. It was only when I finished the first paragraph of W.E.B. Du Bois’ Souls of Black Folk when the words “who does it feel to be a problem? I answer seldom a word” made my fears connect to others’ struggles. It is this kind of connections that make political education, like this reading group about Du Bois so important to resistance today.

A few of us are gathering in Philadelphia to read Du Bois’ The Souls of Black Folk with Dr. Anthony Montiero. I think It is especially important that we read the revolutionary words of Du Bois to be able to criticize, and resist, and find our place in this moment in the movement. In all that, it is also important to remember that our fight is worth it, because “America has too much to teach the world” and perhaps, at this time, what we America needs to teach is resistance by example. 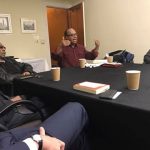 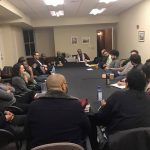 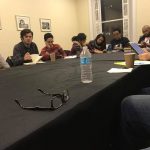 There are few pieces of writing so packed with ideas and concepts as are the first few pages of The Souls of Black Folk , W.E.B Du Bois’ communist manifesto, published in 1903.

The first phrase of Souls is revolutionary, “between me and the other world.” To this day the default in any racial binary is white. The non-white is the other, the minority, the different. However, Du Bois turns the paradigm on its head. Du Bois’ world, the black world, is the true world and whites live in another world.  Whites live in a world where Du Bois is a problem. He learns by the way whites look at him that he is a problem. He sees their racial gaze, but Du Bois finds time for irony, “being a problem is a strange experience.” From the concept of the problem, Du Bois moves to the concept that Dr. Anthony Monteiro calls “the most profound concept of race in the world,” the concept of the Veil.  There is a veil between Du Bois and the other world. Du Bois sees the world through the Veil, which like the veil of a bride on their wedding day, means that he sees through the Veil better than the person on the outside looking in at him. This is a strong statement for policymakers, social scientists, ethnographers, and any observer of Du Bois saying, “I see you. I see you better than you think I see you. I also see my fellow folk behind the Veil. It is me, not you, who should study my social condition, and perhaps yours.” After the Veil, Du Bois gets to the concept of Double Consciousness. He sees racism, he sees race, he sees blackness for its beauty, however, he also sees and hears the stereotypes. This “two-ness” makes Du Bois measure himself by the stereotypes of the white world. In another revolutionary statement, Du Bois wishes to be “both a Negro and an American.” Both a Black man and a Human, as Monteiro complements. All of this is happening before Du Bois reaches page three.

In an autobiography published in 1940, Du Bois calls the writing of Souls “a cry in the middle of the night.” Indeed, the 35-year-old scholar had reasons to be frustrated.

Du Bois was the first African American to receive a PhD from Harvard. To achieve this feat he needed to complete not one but two  bachelor’s degrees and almost two doctorates degrees just to be counted among those worthy of a Harvard graduate education. Du Bois by 1903 would already have two publications: his doctoral thesis in history from Harvard which was published in 1896 and The Philadelphia Negro, the first empirical sociology study in the United States, published in 1899. Because of discrimination, Du Bois couldn’t teach in the institutions that he was affiliated with, such as Harvard and the University of Pennsylvania, although he was more qualified than many of the faculty.  He went to teach at Wilberforce, an historically black college (for more on Du Bois’ career, see Alton Morris’ A Scholar Denied). The period of time when Du Bois was beginning his teaching career overlapped with a period of time some have called a “nadir of American race relations.”  The emancipation of enslaved people in 1863 and the end of the civil war in 1865 kindled hope and movement towards reconstruction. After only three years these hard fought bureaus and committees were disbanded and replaced with the 13th amendment, Jim Crow laws, and the ruling in the Supreme Court case of Plessy v. Ferguson, establishing black Americans as legally inferior to blacks. This may seem bleak; yet, at the beginning of that ‘cry into the night’ for Du Bois who (at this time) maintains hope that “America has too much to teach the world.”

~This is a part of a six-post series following a W.E.B Du Bois reading group in Philadelphia, moderated by Dr. Anthony Monteiro. Following each meeting of the group, we’ll post a reflection by one of the members. If you’re in the Philadelphia area and would like to join the group for the next session,  go to the Facebook group  and join us for the next meeting.

This reflection was written by Abraham Gutman.  Abraham is originally from Tel Aviv and currently living in Philadelphia. He holds an MA in economics from Hunter College. He is an aspiring sociologist interested in race, policing, housing, and all types of football. You can contact him on Twitter @abgutman.