Looking back on 2015, there was plenty of trouble for white women and white feminism. From HIllary Clinton to Rachel Dolezal to the film about the suffragettes to Hollywood taste-makers, there were new incidents, but old patterns. 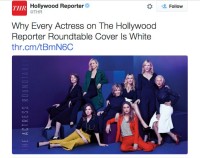 Back in January, 2014 I started a series about the trouble with white women and white feminism. Since then, I’ve written about 18 posts, for a total of around 35,000 words – or, half a book. Here, I’m collecting them all in one place and re-ordering them by theme. There’s more I want to say on this subject, but I wanted to collect the writing I’ve done so far into one post because people often request this, and because it’s another step toward crafting this into a full-fledged book project. As I continue to add posts to the series, I’ll include them here, so drop a bookmark on this page if you find it useful.

I opened with something of a personal note, that some of my closest friends are white women. I, myself, am a white woman.  I have been helped in my career by white women, many of them white feminists. And, perhaps predictably, I come from a long line of white women ancestors, whose lives were constrained by gender. I found feminism and a way to a different life.  But what I observed at the outset is still true: There’s a consistency to the way white women behave and white feminists respond that is both troubling and requires critical attention.

Part I. White Women in the Early U.S.

In this section, I try to parse “white women” from “white feminism.” The overall point here is to look at there are ways in which white women have played a significant role in shaping white supremacy and benefiting from it. Sometimes, this is separate from feminism (by white women who don’t identify as feminist), sometimes it’s consistent with feminism. Not all white women are feminists, and historically speaking, feminism is an idea that early white women lifted (you could say “stole” and you wouldn’t be wrong) from Native American women.

3.     The Racial Origins of Feminism

Part II. The Rise of the Professional, Managerial Class of White Women

The trouble with white women and white feminism is rooted in a particular class politics. There is a sociological literature on the rise of the professional-managerial class (PMC), as a distinct class position, which has grown significantly in the US over the last half of the 20th century and into the 21st century. These include jobs like teachers, social workers, engineers, managers, nurses, and middle-level business or government administrators, jobs where white women are disproportionately represented. This class position available to some white women overlaps with particular racial identity formation, in which “management” of one’s self, one’s body, one’s family is part of success. Taken together, these make a particular kind of feminism appealing to white women of the professional-managerial class.

White women create, actively participate in maintaining, and benefit from, institutional racism. (This is easily the section I’d like to work on more, and there are bits of this in other posts.)

Representations of white women in U.S. popular culture are pervasive, problematic and largely lacking in a sustained critique. Here, I make an effort to launch such a critique in contemporary popular culture.

13.   Rachel Dolezal and the Trouble with White Womanhood

Easily the most important contribution to the revitalization feminism in the last fifty years has been Kimberlé Crenshaw (and other black feminists’) idea of intersectionality. That is the notion that ‘woman’ is not a unified category in which all women share the same interests, but rather ‘woman’ is intersected by race, by class, and by sexuality and (cis)gender identity. Second to that theoretical and political contribution to feminism, the most important contribution in the last fifty years is arguably the Internet. In some ways, these two advances – – intersectional feminism and the Internet —  have been on a collision course.

One of the key themes that runs through this work is that white women occupy a particular structural position that enables them (/us) to access more resources (relative to women and men of color): education, jobs, houses, health care, leisure time. This structural advantage creates an affinity for ‘gender only’ feminism and a kind of dissimilitude with intersectional feminism.

To the extent that white women take up feminism to advocate for equality to white men, that feminism is consistent with white supremacy. For me, personally, it continues to be important to critique white feminism because I want to disrupt white supremacy in all its forms, including when it manifests as white feminism.

I also think it’s important to critique white feminism it harms other women and perpetuates racism (causing more harm). My critique is meant to interrupt the harmful cycle of ‘gender only’ feminism that replays in generation after generation of feminists. This cycle is a kind of ignorance that’s painful to other women, especially women of color, and also queer, gender nonconforming and transgender women of all races.  It is the antithesis of feminism.

Reflecting on peace and goodwill this time of year, I often return to Dr.King’s sermon on Christmas from 1967. This morning, I was struck by his global scope in this passage:

It really boils down to this: that all life is interrelated. We are all caught in an inescapable network of mutuality, tied into a single garment of destiny. Whatever affects one directly, affects all indirectly. We are made to live together because of the interrelated structure of reality. Did you ever stop to think that you can’t leave for your job in the morning without being dependent on most of the world? You get up in the morning and go to the bathroom and reach over for the sponge, and that’s handed to you by a Pacific islander. You reach for a bar of soap, and that’s given to you at the hands of a Frenchman. And then you go into the kitchen to drink your coffee for the morning, and that’s poured into your cup by a South American. And maybe you want tea: that’s poured into your cup by a Chinese. Or maybe you’re desirous of having cocoa for breakfast, and that’s poured into your cup by a West African. And then you reach over for your toast, and that’s given to you at the hands of an English-speaking farmer, not to mention the baker. And before you finish eating breakfast in the morning, you’ve depended on more than half of the world. This is the way our universe is structured, this is its interrelated quality. We aren’t going to have peace on earth until we recognize this basic fact of the interrelated structure of all reality.”

In this lecture, he explains that part of the reason people are so upset about riots that had happened recently is that these were attacks on property, which he says, “is symbolic of the white power structure.”

Many people forget (or never knew) how radical King had become, connecting the fight for racial justice to the anti-war movement and a global poor people’s movement.

This sermon was one of five he gave in the prestigious Massey Lecture series. He titled the series “Conscience for Change.” These lectures are compiled in both text, as a book, and audio format, as a CD) [The book was re-released as “The Trumpet of Conscience.”] The lectures were recorded almost fifty years ago and the use of “man” throughout can be off-putting, but otherwise, King’s words still resonate as we continue wrestle with the legacy of white supremacy.

You can also listen to the entire message here (about 1 hour in length and the site requires free registration).

Peace and goodwill to all of you.