The story of the pool party in McKinney, Texas brings to light a number of things about the society we live in: namely, that it is a white racist society that has far more lingering problems than achievements in the realm of race relations. The incident exposes the failed logic of the attempts to roll back efforts to desegregate U.S. society. It also demonstrates how the involvement of ordinary white Americans assists in the maintenance of this racist social system. Finally, the incident teaches us the important role antiracist whites must play in dismantling the racist order. 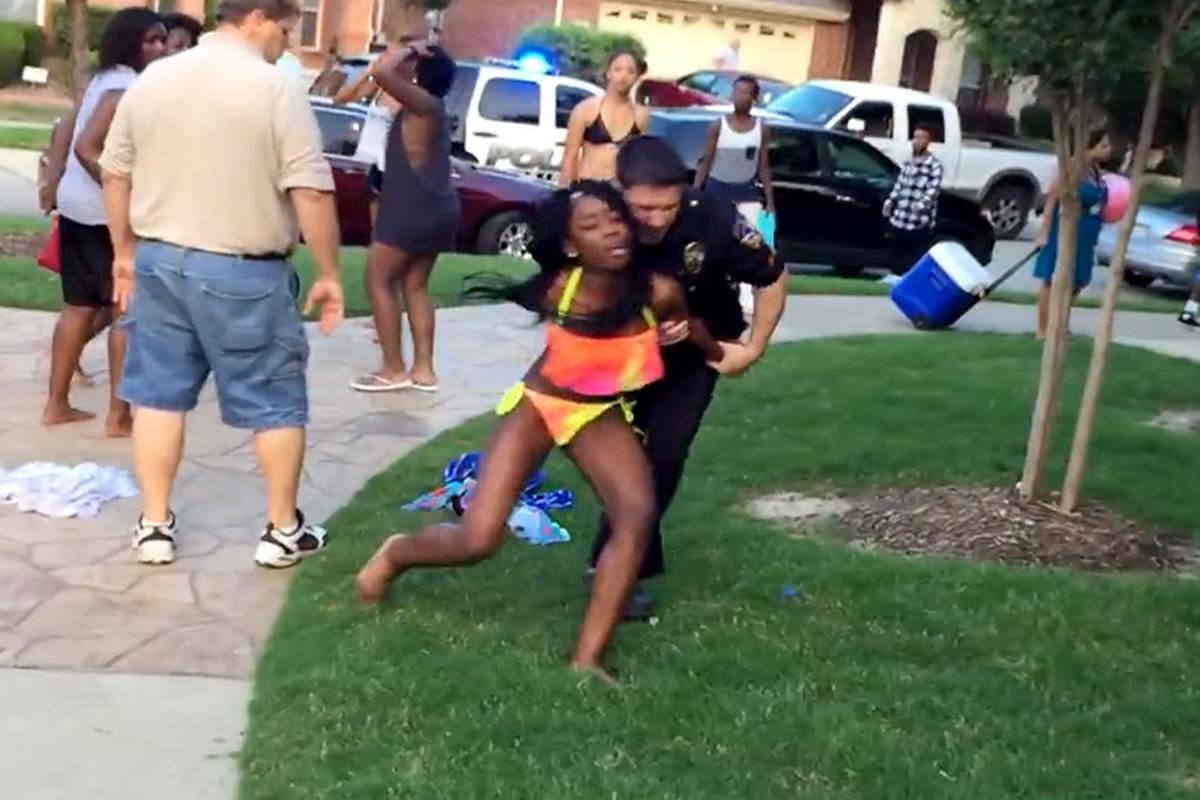 After a white officer named Eric Casebolt assaults an unarmed teenage girl and draws his weapon on unarmed teenage boys, whites in a variety of outlets defend his actions, including his lawyer. Once again, black teens are viewed with contempt for having fun and are blamed when they are victims of white violence against them. Despite what a variety of outlets have insisted (including McKinney’s own mayor), Casebold is not merely a “bad apple.” People need to understand the role of police since slavery times has been to “protect” white neighborhoods and other social spaces from “invaders.” As shown in the classic study of racism experienced by middle-class blacks (Joe Feagin and Mel Sikes, Living with Racism), suburban conflict is less likely to involve poor blacks but rather middle-class blacks and whites (and the cops who represent them).

Indeed, essentially ALL whites are complicit in the defense of white supremacy and white spaces, not just the individual officer. That is how systemic racism works. To be sure, Casebold must be held accountable for his actions (which remains to be seen), but also the white residents who called the cops in the first place, equating black faces with criminality. While this incident is strikingly similar to the incident back in 2009 in Cambridge, Massachusetts, involving Dr. Henry Louis Gates, I have yet to see any comparison made in the mainstream media. These incidents are treated as isolated, perpetrated by isolated white individuals acting alone, presumably without the approval of anyone.

Some context is helpful in understanding what happened. As of the 2010 Census, McKinney was about 75 percent white and 10 percent black, with 18 percent Hispanic of any race. The white percentage has increased slightly since the 2000 Census, while the black percentage has decreased slightly. The Dallas suburb’s population has exploded since 1990, from around 21,000 to approximately 155,000 today. While cities in the south and west tend to be less segregated than “older,” more established cities in the Northeast or Midwest (for a list of cities ranked by dissimilarity index, see here), McKinney is highly segregated by race; while one side of town is only 50 percent white, the other is 90 percent white. As evidenced by various tweets, white residents have frequently utilized the language of war, speaking of “our” neighborhood being “invaded” by young “outsiders.”

Incidents like these are, at least in part, the product of efforts to dismantle racial desegregation programs and policies, and naive views like that of SCOTUS Chief Justice John Roberts of the “post-racial” society we live in. The costs of segregation are numerous, including blacks’ often lesser ability to swim vis-à-vis whites. Desegregation is necessary to challenge whites’ view of entitlement and public spaces as their own (and thus off limits to blacks); however, the will of white Americans to support such programs and policies has abated.

Where do we go from here? Will we see a return to the “white citizens’ councils” of the 1940s in communities like McKinney? Probably not, since they have now been replaced by “color-blind” homeowner’s associations and neighborhood watch programs, often run by local police departments. Still, what if they can no longer price “them” out of their development (i.e., use income disparities as a means to maintain racial barriers)?

Finally, a few white teens who were on the scene have stood with their black peers and spoken out against the actions of Casebold. While the response from some white youth in the community is inspiring, note that (white) young people some decades back (in the civil rights era) said the same thing about their parents’ generation. Apparently something happens to whites once they get a little older.